A feature, not a bug

Ross Douthat had a tweet about this figure from a 538.com article, which was based on data from the Varieties of Democracy project: 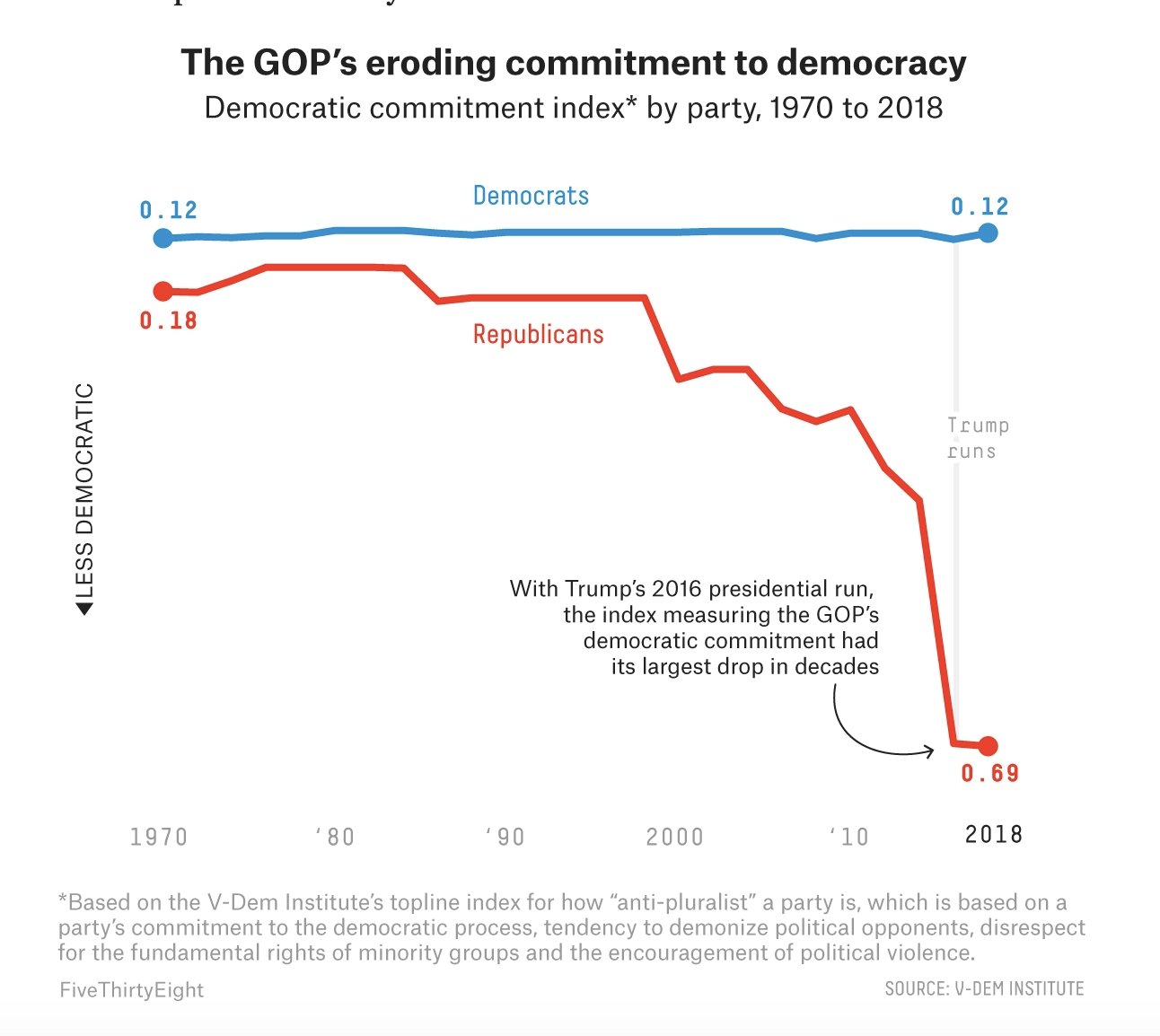 His comment was "It's the totally-flat blue line that tells you this chart is super-serious."  He was being sarcastic, but ironically he was right:  it is the flat blue line that tells you it is a serious measure of what it purports to measure.  In an established democracy, normally all of the major parties accept the rules of the game:  they don't try to block their opponents from running or interfere with the counting of votes; if they lose, they leave office, and if they win they don't try to put their opponents in jail or change the rules to make it harder for them to compete.  The result is lines with values near zero and very little variation over time (V-Dem calls it an "illiberalism index" although the 538 figure reversed it so that high numbers mean acceptance of liberal democracy).

As an example, here are values for Australia:

The two slightly higher values are for short-lived minor parties--all of the major parties, left, right, and center, have values like .05, with hardly any variation.

All low except for the right-wing populist "Alternative for Germany" (AfD) party in the last couple of elections.  The only other one that is distinguishable is the PDS, the successor to the East German Communist party, which started out higher in "illiberalism" but soon became similar to the other parties.

Things get more interesting when you look at emerging or unstable democracies.  In Mexico, the Institutional Revolutionary Party was high in "illiberalism," but now has a more moderate value.  Note also that all three of the major parties increased their values in 2006, when there was a close election with a disputed outcome.

Then there is the United States:

There was a clear increase for the Republican party after 2000, and a big jump in 2016.  It seems safe to say that there will be another increase when they get 2020 in there.

What has happened in the United States is very unusual, and may be unique.  I'll look more closely at the data in the future to see if there are any other cases of a major party in an established democracy dramatically increasing its illiberalism score.

The index is based on expert judgments, and of course you could disagree with those judgments.  I agree about the differential trends for the Democratic and Republican parties, but think there's something funny about the levels.  The Republican values in 2016-18 are about 0.7, roughly equal to the AfD and considerably higher than the French Communist party of the 1970s (which was about 0.45).  Even with the way it is now, I'd say that the Republican party is more committed to democracy than the AfD is or the French Communists were.  Also, the American scores are consistently higher than other democracies--at their lowest, the Democrats were typically about .12 and the Republicans about 0.18, considerably higher than the Australian or German parties.  The United States has a very unusual political system, and I think that the V-Dem approach to measurement doesn't fit as well here as in most democracies.  I'll also consider that point in a future post.

Posted by David Weakliem at 5:07 PM