Beginning in 1972, the Gallup Poll asked "is there more crime in this area than there was a year ago, or less?"  Around 1990, they switched to asking about "your area," but it doesn't seem to have made much difference (a Los Angeles Times poll asked the old form in 1994, so there's a little overlap).   I calculated a summary of perceptions:  the logarithm of the ratio of "more" to "less" answers.  It would have been simpler to use percent saying more to percent saying less, but there seems to have been a long-term decline in the percent volunteering "about the same," and using the logarithm of the ratio takes that out of the picture. Positive numbers mean that the number who thought there was more crime was larger than the number who thought there was less.  It was positive in most years, but for a few years around the turn of the century the number seeing less crime was larger than the number seeing more.  The numbers seeing an increase in crime are generally smaller today than they were in the 1970s.  The crime rate has indeed fallen, so that raises the question of whether perceptions are related to reality.  I regressed the ratio on the change in the national homicide rate in the last three years.  Homicide is only one form of crime, but it's measured more accurately than other forms, and gets more media attention, so it seemed like the best place to start.  I used the last three years rather than the last year because I figured people probably didn't take the time frame all that literally, but just treated it as meaning "recently."

There is a positive relationship between change in the murder rate and perceptions of change in crime, with a t-ratio of 2.7 and 3.2 depending on the exact model.  There is a good deal of inertia*, so it takes a while for changes in reality to show up in people's perceptions, but they do show up.

*The coefficient on the previous value of  perceived change in crime was about .9**t, where t is the gap of time in years.  That means that a change in the murder rate would have a "half-life" of about 7 years in terms of its effect on perceptions.

[Data from the Roper Center for Public Opinion Research]
Posted by David Weakliem at 8:31 PM No comments:

Many liberals argue that the Tea Party and related conservative movements are basically about race.  The idea is that latent racial fears and resentments among whites were reawakened by the election of a black president or the recession.  In a column a couple of months ago, Paul Krugman says:

"Indeed, race is the Rosetta Stone that makes sense of many otherwise incomprehensible aspects of U.S. politics. . .  we’re told that conservatives, the Tea Party in particular, oppose handouts because they believe in personal responsibility, in a society in which people must bear the consequences of their actions. Yet it’s hard to find angry Tea Party denunciations of huge Wall Street bailouts, of huge bonuses paid to executives who were saved from disaster by government backing and guarantees. Instead, all the movement’s passion, starting with  Rick Santelli’s famous rant on CNBC, has been directed against any hint of financial relief for low-income borrowers. And what is it about these borrowers that makes them such targets of ire? You know the answer."

I don't find the idea that it's all about race to be very convincing, but those examples were especially puzzling.  My impression is that indignation about Wall Street bailouts has been important for the Tea Party and that opposition to mortgage relief has been a secondary theme.  (Rick Santelli just provided the spark--he wasn't a major figure before the Tea Party started, and he isn't one now).

I recently found a survey, conducted by CBS News in March 2009, that gives some systematic evidence.  It had parallel sets of questions about aid to banks and other financial institutions, to homeowners having trouble with their mortgages, and to the auto manufacturers.  For each one, it asked four questions:  whether people approved of government aid, whether aid was necessary or things would improve on their own, whether the problems were their own fault or caused by things beyond their control, and whether you were mostly relieved or mostly resentful about the prospect of them getting aid.   Giving the complete wordings of all questions would take a lot of space, but here is an example:

"Which best describes your feelings about Barack Obama's policies toward the nation's housing and mortgage crisis -- mostly relieved that some homeowners might be able to avoid foreclosure, or mostly resentful that the policies could benefit irresponsible lenders and homeowners?"

The survey didn't contain any questions about the Tea Party (few surveys did until 2010), but it did have one about Rush Limbaugh (the options were favorable, unfavorable, undecided, or haven't heard enough to have an opinion).  Having favorable views of Rush Limbaugh seems like a good indicator of support for "movement conservatism."

Here are the percents disapproving of aid by opinion on Limbaugh:

And finally, here are the percents saying that aid made them resentful by opinion of Limbaugh


People who had a favorable opinion on Limbaugh had more negative opinions of the bailouts of banks and financial institutions than anyone else.  A striking thing about all of these tables is that people with a favorable opinion of Limbaugh made little or no distinction between banks & finance, homeowners, and auto companies:  the distribution of opinions was just about the same regardless of which one was being asked about.  Everyone else made distinctions, generally being more sympathetic to homeowners than banks or auto companies.  So on this evidence, movement conservatives actually are opposed to "handouts" in principle, and Krugman is offering a solution to a puzzle that doesn't exist.

[Data from the Roper Center for Public Opinion Research]
Posted by David Weakliem at 6:13 PM 3 comments:

Continuing with the survey I discussed in my last post, positive views of big business and socialism declined with education:

There is a view, going back to Hayek, von Mises, and Schumpeter, that intellectuals are hostile to capitalism.  Of course, not everyone who graduates from college or even goes to graduate school is an intellectual, but it seems reasonable to assume that they'll be more influenced by the views of intellectuals (and Hayek, at least, meant "intellectuals" pretty broadly).   This idea remains popular among conservatives:  see slide 17 of Kevin Hassett's critique of Thomas Piketty for an example.  It clearly doesn't fit the data (or any data I've ever seen, for that matter).

Another idea is that less educated people would be more suspicious of things that are abstract or remote:  that would include capitalism, socialism, entrepreneurs, and big business, but not small business.  That doesn't fit either.

An idea that does fit is that involves distance from "elite" opinion.  American politicians invariably praise small business, entrepreneurs, and free enterprise, and condemn socialism and "big business."  (They often say nice things about particular big companies, but then they'll talk about free enterprise, or entrepreneurs, or job creators, etc.).   Less educated people may not have picked up this way of thinking (or at least speaking).


[Data from the Roper Center for Public Opinion Research]
Posted by David Weakliem at 4:16 PM No comments:

A while ago, I had a post about views of capitalism and socialism.  A Gallup News Service poll from November 2012 asked people if they had "a positive or negative image of" capitalism, socialism, and some other terms.  The results, ranked from highest to lowest percent positive (omitting people with no opinion):

Both capitalism and socialism got higher positive ratings than in the survey I wrote about in my previous post.  That may be because this survey led off with "free enterprise," which may have put people in a positive mood.  In the earlier survey, the list started with "socialism" and then asked about "progressive" and "libertarian" before "capitalism."

My previous post was about age differences:  compared to older people, younger people were considerably more positive about socialism and less positive about capitalism.  Does that pattern hold up here?

It does.  Both surveys show big age differences in views of socialism and smaller differences in views of capitalism, with socialism and capitalism about equally popular among the youngest age group.  I also show the figures for free enterprise, since there is a statistically significant age difference.  (There's no significant difference in views of big business or entrepreneurs; younger people are more favorable to the federal government, but I suspect answers to that question are strongly influenced by views of the current administration.)

[data from the Roper Center for Public Opinion Research]
Posted by David Weakliem at 2:47 PM No comments:

Use every man after his desert, and who should 'scape whipping?

Every once in a while I see a survey result that really surprises me.  I ran across this one recently, from a survey conducted by ICR in 1997.  "Do you think adultery should be punished as a crime, or not?" 20% said it should, and 6% weren't sure.

Posted by David Weakliem at 7:18 PM No comments:

Exceptionalism at the top

Almost everyone who's been paying attention agrees that over the last 30-40 years, the share of total income going to people near the top (say the top 1%) has been increasing.  It's also pretty widely agreed that this trend has been stronger in the  United States than in most other countries.  But it's not clear exactly how big the national differences are.  The World Top Incomes database gives data for a number of countries, but the range of dates varies, many countries have missing observations, and there's a good deal of short-term variation, so it's difficult to get a simple summary.  This is a first attempt.

There are nineteen nations in the World Top Incomes database that have data going back to the 1970s.  This figure shows the average share of the top one percent (adjusted for differences in the nations included in particular years).  It declined from 1970 to the early 1980s, and then increased.  The big jump in 2012 is probably not meaningful, since it's based on only one or two nations. 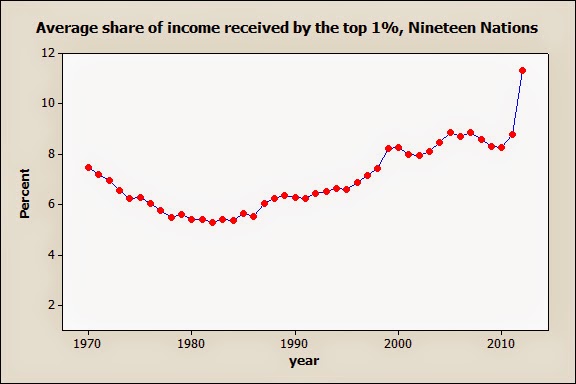 I then calculated a linear trend for each country adjusted for these differences.  Adjusting is important, because otherwise estimates of trends would be distorted by the particular years for which data were available:  e. g., an "average" country for which the data began in 1985 would seem to have faster growth than one for which the data began in 1970.   The rankings, taking the United States as the standard of comparison:

Posted by David Weakliem at 2:06 PM No comments:

Simon Cheng and David Weakliem, "Beyond the One-Drop Rule: Views of Obama’s Race and Voting Intention in 2008" [previous versions were entitled "Did America Elect a Black President?"]

ABSTRACT:  We use data from a national survey of likely voters conducted before the 2008 election to study the association between Obama’s perceived racial identity and voters’ choices. Voters who saw Obama as biracial were substantially more likely to vote for him, suggesting that many Americans regard a biracial identity more favorably than a black identity. The relationship was stronger among Democrats than among Republicans. The potential implications of our findings for the future of race in American politics are discussed.

Posted by David Weakliem at 9:05 PM No comments: