How ignorant are we?

On Sunday, Nicholas Kristof had a column saying that Americans don't know much about religion.  The two specific items he mentioned were "only one-third know that Jesus delivered the Sermon on the Mount, and 10 percent think that Joan of Arc was Noah’s wife."  I can't find any record of the second question in iPOLL.  There was one about the Sermon on the Mount, and indeed only 34% could answer correctly (it was free response, not a multiple choice question).  But that was in 1954, so I hope that wasn't what he was citing.  I did run across a question that has been asked a number of times since 1950:  whether you can name the first four books of the New Testament:

So there seems to have been a small gain in knowledge.  Given the rise in educational levels, you might expect more.  On the other hand, there has been an increase in the number of non-Christians and non-religious people.

[Data from the Roper Center for Public Opinion Research]
Posted by David Weakliem at 11:01 PM No comments:

Larry Bartels has an article entitled "US is a world leader is class conflict over government spending."  The data behind his claim is that differences between the rich and the poor in opinions about government spending were larger in the US than in any of the 33 countries in the 2006 International Social Survey Pogramme (see the link on the right), except South Africa.  But his analysis was based on just one question--opinions about whether people were in favor of "cuts in government spending," so I looked at questions from the 2009 ISSP survey, which focused on social inequality, to see if the same pattern held.

I created an index based on questions about whether differences of income in the country are too large, whether it is the government's responsibility to reduce income differences, the government should provide a decent standard of living for the unemployed, the government should spend less on the poor, and whether people with high incomes should pay a larger share of their incomes in taxes than people with low incomes. This seems like a pretty good measure of support for egalitarian policies.  The size of "class" differences (coefficients from a regression of opinions on standardized income):

The United States is not at the very top, but is close.  Britain, New Zealand, and Australia are also among the highest (Canada was not included in this survey).  So Bartels's general point is supported, although large class differences seem to have roots in Britain rather than being unique to the United States.  There also seems to be a tendency for class differences to be larger in more affluent nations.  The negative figure for Venezuela means that people with higher incomes were (slightly) more egalitarian, which seems very surprising, but given the political situation you have to wonder about the data quality for that country.
Posted by David Weakliem at 7:17 PM No comments:

Thomas Edsall had a strange piece in the New York Times recently.  It starts with a good question--why the difference in the trajectories of same-sex marriage as abortion as political issues?  Same-marriage came onto the scene in the mid-1990s as a result of court decisions.  For the first ten years or so, it was a winning issue for conservatives, but then things started to swing around.  Now support for same-sex marriage is becoming the mainstream position, and many conservatives seem to be giving up the fight.  Abortion, of course, has been a contentious issue for more than 40 years.

Edsall gave figures showing  substantial change in public opinion on premarital sex and women's careers and concluded that "with all of their demographic problems, the question is, how much can Republicans afford to fool around with this particular kind of political dynamite? [ie, restricting abortion]."  What makes his article strange is that he doesn't give any figures on public opinion about abortion except for some peripheral issues, even though there have been many questions over the years. 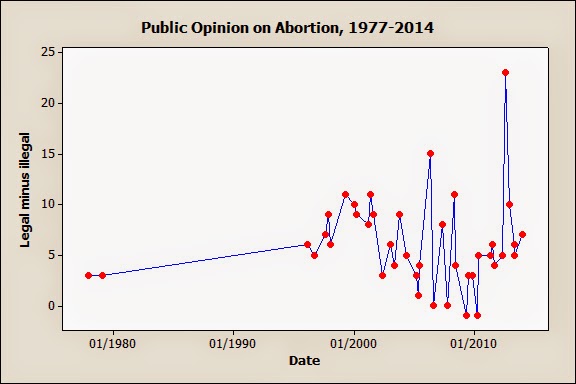 Basically, nothing has happened.  There are ups and downs, some of which are too big to be explained by sampling variations, but they have very little pattern.  They might reflect short-term reactions to particular events, or the mysterious variation that sometimes occurs among different surveys.  So hard-line opposition to abortion is not "political dynamite," any more than it was in the 1970s.  It repels some voters, but appeals to an almost equally large number.

Posted by David Weakliem at 10:29 AM No comments:

In 1994, a Times-Mirror poll asked the same question and found 12% said better, 73% worse, and 9% volunteered that it did some of both.  Although opinions were still predominantly negative in 2002, they were a lot less negative than they had been just eight years earlier.

Why?  The welfare reform of 1996 was popular and well publicized, so maybe that caused the shift towards more favorable views.  Still, my feeling is that a single piece of legislation, especially one that most people have no direct experience with, is unlikely to make that much difference.  There seems to have been a strong conservative/anti-government mood in 1994, for reasons that aren't clear to me, and probably the very negative views of welfare reflect that (see my post on food stamps).  Unfortunately, the question has not been asked since 2002.

Posted by David Weakliem at 7:11 PM No comments:

Writing in the New Yorker a few weeks ago, Jill Lepore noted that polls now show that people overwhelmingly say yes when asked if they would vote for a qualified woman for president.  She adds, "But the question requires respondents to self-report on the kind of thing, like church attendance, that they tend to overstate. In 2005, Gallup asked a different question: Do you think most of your neighbors would vote for a woman for President? Thirty-four per cent said no."  From the context, it seems that she is interpreting the answers about what "your neighbors" would do as a more accurate measure of real opinions.

Is this a reasonable interpretation?  I did a cross-tabulation of gender by ideology by answers to two questions, one about what you would do, the other about your neighbors (each question was asked to a randomly selected half of the sample).  The numbers below are the percent saying "yes":

Answers about whether you would vote for a women have a strong relation to self-described ideology, especially among women.  Opinions about what your neighbors would do have a weaker relationship.  In fact, moderates are more likely to say that their neighbors would support a woman for president than liberals are.

If you think that the answers to the question about neighbors is a more accurate measure of true beliefs, you have to conclude that a lot of liberal women would not vote for a woman for president, which seems very unlikely.  The more plausible interpretation is that people are answering the question about neighbors in a straightforward way, and people generally think that they are less prejudiced than most other people.

[Note:  data from the Roper Center for Public Opinion Research]

Posted by David Weakliem at 5:26 PM No comments: