Almost 20 years ago, Richard Herrnstein and Charles Murray argued that social position was becoming more closely connected to intelligence.  According to their argument,  at one time many bright children from working-class families had to quit school for economic reasons (and in many cases, because they knew they would face racial and ethnic discrimination if they tried to keep going).   Most of them wound up in working-class or lower-middle class jobs.  That left managerial and professional jobs open to be taken by people who weren't particularly bright, but came from the right background.   With wider access to education and less discrimination, bright children from working-class backgrounds move up, and dullards from upper-class backgrounds move down.  That may seem like a good thing, but they argued it has some undesirable consequences.  Their book got a lot of criticism, but almost all of that focused on a different point--their claims about racial differences in intelligence.  Most people seemed to find their argument about class and intelligence to be pretty plausible.

At about the same time, I published a paper (with Julia McQuillan and Tracy Schauer) that suggested that class differences in intelligence were decreasing, not increasing.  The General Social Survey includes a ten-item vocabulary test, and vocabulary scores have a high correlation with scores on full-scale intelligence tests.  The decline was mostly because overall differences in vocabulary were declining--that is, people were coming to be more concentrated in the middle, with fewer high or low scores.

Now Charles Murray is back with the same argument, and this time it's getting more attention.  Meanwhile the GSS has kept accumulating more data.   Here are the means and standard deviations of vocabulary scores for people born in different decades:

The 2009 Behavioral Risk Factors Surveillance System (just a survey, despite the ominous name) has a number of questions on whether people had suffered "adverse childhood experiences."  They were only asked in two states, but since the BRFSS is a very large survey, that still gives a sample of about 10,000.  I'm teaching a class in Social Problems and the topic of child abuse came up, so I decided to look and see what the data said.  My expectation was that things would have improved, but to my surprise I found that younger people were more likely to report having experienced all of the "adverse experiences" (the figures are shown at the end of this post).

Of course, people were recalling things from years ago, and it's possible that as people get older, they tend to forget bad things about their childhood.  It's also possible that standards have changed--for example, younger generations could certainly have a broader definition of what counts as being "insulted or put down." But there doesn't seem to be much room for forgetting or differences of interpretation in:  "how often did anyone at least 5 years older than you or an adult, force you to have sex?" Another possible explanation for the differences between generations, offered in an article in the "Morbidity and Mortality Weekly Report," is differential mortality:  if adverse childhood experience increases the risk of death, then people from older generations who suffered them will not be in the sample.  However, from other evidence in the BRFSS, I don't think that the effect on mortality is that large.  So that leaves the unpleasant possibility that these kinds of mistreatment actually became more common over much of the 20th century. 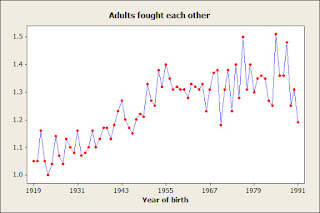 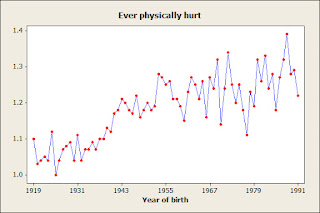 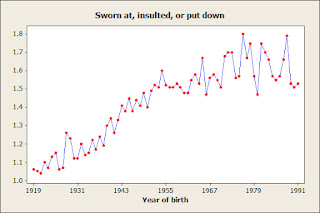 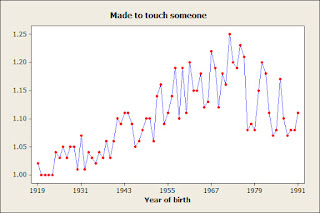 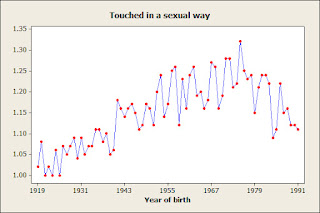 Posted by David Weakliem at 6:13 PM No comments:

How to annoy liberals, moderates, and conservatives

For a change, I decided to post information that's not just of academic interest, but can be put to practical use in daily life.  A November 2010 survey by CBS News included an unusual question:  "Which one of the following behaviors do you find the most annoying? 1. People getting onto an elevator before people get off,  2. Spitting in public, 3. Cell phone conversations in restaurants, 4. Driving slow in the fast lane, or 5. The use of the acronym LOL?"  Like most surveys today, it also asked people whether they would describe their political views as liberal, moderate, or conservative.

So if you want to annoy a liberal, the best way is to spit in public; if you want to annoy a conservative or moderate, drive slowly in the left lane.  There weren't that many people who didn't choose a political philosophy, but they had a distinctive pattern:  they weren't concerned about driving slowly, but disliked people talking on cell phones in restaurants.  The differences were statistically significant, and remained so after controlling for age and gender (as you might expect, younger people and men were more annoyed by slow drivers, while older people and women were more annoyed by spitting in public).
Posted by David Weakliem at 6:20 PM No comments:

A number of writers have recently said that the public is in an "anti-government mood," so it's not inclined to support liberal policies.  When such writers cite surveys, they usually point to a question about whether people "trust the government in Washington to do what is right." The problem is that answers to this question probably reflect feelings about the people making decisions, not about government in general.  That is, a person might distrust "the government in Washington" because it's not taking a more activist role.
However, there is a more relevant question that's been asked a number of times since 1994, mostly by Pew.  People are asked to choose between "Government is almost always wasteful and inefficient" and "government often does a better job than people give it credit for."  Here is a graph of the percent who choose "wasteful and inefficient": 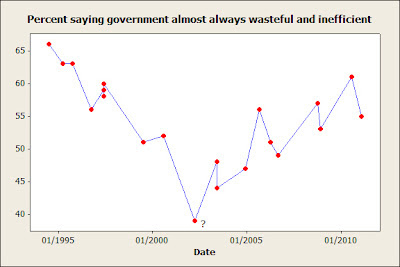 The results for April 2002 seem questionable:  the Roper Center reports that 39% agreed and 51% disagreed, but once in a while they make a mistake, and 51% agreement would be more consistent with the rest of the data.  Regardless of which is the right figure, beliefs about government have become more negative since about 2001, but are less negative than they were in the mid-1990s.

Posted by David Weakliem at 1:58 PM No comments: