You tell me it's the institutions

Last week Yuval Levin had a piece in the New York Times saying that there had been a "collapse of our confidence in institutions — public, private, civic and political."  He proposed an explanation:  "we lose faith in an institution when we no longer believe that it plays this ethical or formative role of teaching the people within it to be trustworthy" and that most institutions are no longer doing this.    He mentioned politics, "the sciences, ... law and ... other professions meant to offer expertise," "the academy," religion, and "artists and athletes."  He then said "the military is the most conspicuous exception and also the most unabashedly formative of our national institutions — molding men and women who clearly take a standard of behavior and responsibility seriously."

I had a post a few years ago about confidence in various institutions, and it has declined for most since the 1970s, with the military as the one clear exception.  So that seems to fit with Levin's account.  But I also had a few posts about a lesser-known series of data about the "honesty and ethical standards" of various occupations and professions.  There have been some declines, but more increases.  For example, evaluation of the standards of funeral home directors and realtors have generally increased since the 1970s; lawyers declined from the 1970s to about 1990, but have increased since then.  In this group, the military no longer seems so exceptional.

That suggests another explanation, which I implied in my earlier posts:  confidence has declined in institutions that are connected to politics, especially national politics.  Most of the "big" institutions--education, business, religion, etc. are involved in politics, either because they taking sides or because they are subject of political controversies.  People don't like political conflict, so as polarization has increased, confidence in these institutions gets pulled down as well.  The military is unusual because it has a strong tradition of staying out of partisan politics and because both parties avoid criticizing it.  Although Democrats tend to favor lower military spending, they rarely make negative statements about the military--they just say that we already have the strongest military in the world.  As a result, the military doesn't get pulled down by association with political controversy--it may even gain because it seems to be above politics.

The larger issue here is that Levin holds that political polarization is a symptom of a general social crisis:  "We can see that in everything from vicious partisan polarization to rampant culture-war resentments to the isolation, alienation and despair that have sent suicide rates climbing and driven an epidemic of opioid abuse."  The alternative, which seems more convincing to me, is that political polarization is about politics, not a symptom of something else, and that there are specific social problems but no general social crisis.
Posted by David Weakliem at 10:54 PM No comments:

A couple of years ago, I proposed that "American society has become a lot more socially egalitarian over the last 60 years or so. Educated people don't want to be thought of as snobs or elitists, and less educated people are less likely to think they should 'improve themselves' by emulating the middle class.  At one time, you could say that Democrats thought of themselves as the party of the common people, and Republicans thought of themselves as the party of successful people.  Now both parties think of themselves as the party of the common people, plus the fraction of the elites who care about or understand the common people."  I have looked for evidence bearing on this point, and report two examples in this post:  white people have become less likely to say that racial inequality is due to things that could be regarded as the fault of black people, and people have become more likely to say if someone is poor it's the result of "circumstances beyond their control" rather than "lack of effort."

My idea suggested that the change would be larger in the advantaged group--that is, that people would be less likely to be critical of people "below" them.  That is the case for race--blacks became a little more likely to say that racial inequality was the result of lack of effort or ability.  I didn't look at opinions about the causes of poverty then, but here are results for 1964 and 2018 broken down by education: 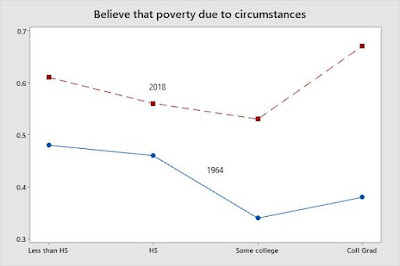 Of course, these are just two groups, so you could say that maybe elites have more contempt for certain kinds of people, like those who didn't graduate from college or those who live in the "heartland."  I have looked for more general survey questions, but haven't been able to find anything very relevant (although this one is interesting).

On the other hand, how much evidence is there for a rise in elite condescension?  The go-to example is Hillary Clinton's "basket of deplorables"--in which she said that not all Trump supporters were racists, xenophobes, etc.  She didn't say anything explicit about the social position of the two "baskets," but since her point was that many Trump supporters has legitimate economic grievances, that implies that working-class supporters were less likely to be "deplorables."  So it was a foolish remark, but not an example of contempt for the working class.   Then last week I saw the NY Times review of a new book by Nicholas Kristof.  The reviewer (Sarah Smarsh) wrote "even well-intentioned, coastal, college-educated scribes commit obliviously condescending word choices ('flyover country')...."  That reminded me that I recently read Paul Collier's The Future of Capitalism and noticed that he also cited the expression as an example of elite condescension.  Although I am coastal (grew up in NJ and lived most of my adult life in Connecticut) and college-educated (at an elite coastal institution), I'm not sure I've ever heard or seen "flyover country" used in a straightforward way--just in an indignant or ironic way.  Finally, a couple of weeks ago, I followed a link from Ross Douthat to an article written right after the 2016 election by Walter Russell Mead.  He said "the Republican Party’s extraordinary dominance in this election demonstrates just how costly the Democrats’ scornful rejection of 'hillbilly populism' has been." Finally, a good example of elite contempt!  I didn't remember anyone using this term, so I did a search, and the first thing that came up on Google was Mead's own article, then something from a book discussing Orville Faubus, then another book talking about an "older South," ..... nothing from a Democrat during the 2016 election.   OK, it would have been a good example if anyone had actually said it.

Ross Douthat had a looking-back-at-the-decade column in which he said "the 1990s, was a period of hubris, when we half-believed that we were entering a new age of domestic dynamism and global power — that our leaders deserved trust again  ...."   Or did we?    General confidence in government rose in the first half of the 1980s, but then declined, hitting a record low in 1990, bouncing back in 1992, and then falling to new low in 1994.   George Bush, despite success in the cold war and the first Gulf War, not only lost his bid for re-election in 1992, but got a smaller share of  than Jimmy Carter had in 1980.  Ross Perot got 19% of the vote in that election even though he had no political background and wasn't particularly well known before he ran for president.  Bill Clinton had a fairly high approval rating when he took office, but it declined rapidly--by June 1993, it was under 40%.  There was no dramatic negative event in that period--as I recall, there were just a number of relatively minor missteps but people judged them harshly.  Then there was the 1994 election, when the Republicans gained 50 seats and got their first majority in the House of Representatives in 40 years.  We've become used to Republican majorities over the years since then, so people have forgotten just how unusual this was--not only hadn't there been a Republican majority for 40 years, but there hadn't even been any close calls.  For example, after Reagan's landslide re-election in 1984, the Democrats still had a 252-182 majority in the House.

Overall, the public mood was very negative in the first half of the 1990s--it didn't start to improve until about 1995.  I don't have any explanation to offer--I just find it intriguing.

While thinking about this, it occurred to me that I've sometimes suggested that Ross Perot appealed to the same general sentiments of "America First" that Donald Trump did, but I haven't actually looked at the evidence.  I looked at a survey in June 1993 that had questions about immigration, NAFTA, and a number of questions about economic competition with Japan.  Opinions about NAFTA and Japan had little or no connection with reported vote in the 1992 election (Perot later became known for opposition to NAFTA, but at that time most people said they didn't know what his position was, and many said they didn't know what Bill Clinton's position was).  Opinions about immigration did make a difference, though--support for Perot was 8% among people who who thought immigration levels should be increased, 11% among those who thought they should stay the same, and 16% among those who thought it should be reduced.  72% of the people who reported voting for Perot thought that immigration should be reduced, compared to 62% of Bush supporters, 62% of non-voters, and 55% of Clinton supporters.

That's not overwhelming, but it gives some support to my ideas about Perot's appeal.

Posted by David Weakliem at 12:33 PM No comments: