The Census Bureau recently reported that Detroit has lost about a quarter of its population in the last decade.  I started wondering about which cities had lost population over a long period of time.  Of the 100 largest cities in 1900, 15 are smaller today (the population of the United States is about four times as large as it was in 1900).  Another five have grown by less than 5%.

A recent article in the New York Times looked at the relationship between height and happiness.  It said that taller people were happier, but the relationship was stronger for men.  The results didn't actually involve happiness in the usual sense, but scores on the Gallup Index of Well-Being, which combines a numbers of things, ranging from how you felt yesterday to how often you'd visited the dentist in the last year.  I don't like indexes like this--feeling happy and visiting the dentist are both good things, but they're not the same thing.  So I looked at the relationship using answers to the question "In general, how satisfied are you with your life?" from the 2008 Behavioral Risk Factors Surveillance System.  Here's a graph showing the estimated relationship (using a cubic polynomial regression) for men and women: 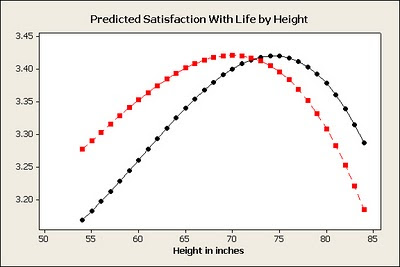 The red line represents women and black represents men.  The figure shows that taller people report being more satisfied with life, up until they are about six inches taller than average for their sex.  Beyond that point, satisfaction declines (I wouldn't take the exact shape of the predictions too seriously for very tall people, since there aren't that many in the sample, but there's clearly some decline).  As the Times article said, the relationship seems to be stronger for men.
Posted by David Weakliem at 10:56 PM 1 comment:

Americans are very positive about the Constitution in general, but not about some of the things that are actually in it.  For example, here's a question from a Gallup Poll taken in January 1941:  "Do you think newspapers should be allowed to take sides in their editorials during election campaigns?"  59% said yes, 33% said no, and 7% were undecided.

But more educated people are more likely to favor civil liberties, or at least say that do, and that's the case here--about 80% of college graduates said it should be allowed.  So given the increase in educational levels, we might reasonably expect support to be much higher today.  There are no recent results, but the question was asked in 1985.  At that time, only 45% said that newspapers should be allowed to take sides, 48% said they shouldn't, and 7% didn't know.
Posted by David Weakliem at 6:26 PM No comments:

The idea that Barack Obama wasn't born in the United States has shown a lot of staying power, but few surveys have asked about it. One of those is a July 2010 poll sponsored by 60 Minutes and Vanity Fair magazine. In this survey, 25% said that they thought Obama was born in another country and 14% said they didn't know. The challenge in interpreting these results is to separate “pure ignorance” from “politicized ignorance.”
By “pure ignorance,” I mean people who don't know that the constitution limits the presidency to “natural-born citizens.” Such people might be neutral or even favorable about Obama being born outside the United States—they might even think it shows that America is a land of opportunity. The survey doesn't ask who you voted for in the last election, but we can look at groups that are heavily favorable to Obama: blacks, liberals, and people who approved of the administration's handling of the BP oil spill (only about 35% did at the time):
Not born in US    Don't Know
Liberals                       11%               6%
Blacks                         12%              11%
Approve handling oil spill     11%               8%
The combined total of people who think Obama was born outside the United States and those who don't know is about 20% in all of these groups. So it seems that about half of the original total represents what I call “pure ignorance.” On the other hand, that suggests that about 20% of Americans are “birthers” to some degree.
Posted by David Weakliem at 10:47 AM No comments: