Moderation in some things

I saw an article by Matthew Yglesias which noted that in 2016 quite a few voters said that Donald Trump was a moderate, or even a liberal.   Only 47% said he was a conservative, compared to 60% for Mitt Romney in 2012 and 62% for John McCain in 2008.  Yglesias suggested that this was because of Trump's positions on economic issues:  he  "campaigned on protectionist rhetoric that voters are more accustomed to hearing from Democrats, promised a large increase in infrastructure spending, abandoned traditional Republican commitments to cut Social Security and Medicare expenditures, and even made ambiguous promises to create a universal health care system."  This doesn't seem that plausible to me--protectionism isn't really an issue that divides the parties, and commitments to Social Security and Medicare and vague promises to see that everyone gets health care coverage are standard for anyone who wants to get elected.  Trump did sound different from most Republicans on infrastructure, but that was only one issue, and I'm not sure that he emphasized it that much--he mentioned it only twice on Twitter in 2016, and one of those was a retweet from Newt Gingrich "Trump shows courage in defending eminent domain as a necessity for construction of infrastructure."  In October 2016, he summarized his economic plan as "eliminate excessive regulations, lean government, lower taxes," just like any other Republican would have done.
In my view, people were more likely to be thinking of "social issues"--Trump didn't give the impression that he cared much about things like abortion, same sex marriage, or prayer in the schools.  Moreover, apart from his position on the issues, some people seem to think of "liberal" in terms of lifestyle and personal morals rather than politics.
I looked for questions that might show which interpretation was correct, but didn't find anything.  However, I ran across a survey from July 2015, a few weeks after Trump announced his candidacy but before the first debate.  It asked people who said that they were Republican or leaned Republican, "do you think that _____ views on most issues are too liberal for you, too conservative for you, or just about right" for Jeb Bush, Donald Trump, Ted Cruz, Marco Rubio, and Scott Walker.  The results

One interesting point is that Republican voters didn't see Trump as particularly liberal.  In terms of perception, Bush was on the left, Cruz on the right, and the other three in the middle, with about equal numbers rating them as too liberal and too conservative.   That makes sense for Cruz, but I'm not sure why that many people saw Bush as too liberal.  Maybe it was just an association with other Bushes, and maybe it was a general sense that he was "establishment."  The other interesting thing is that the share of "don't knows" was substantially lower for Trump than for Walker, Rubio, and Cruz.  That seemed strange to me at first, until I recalled that Trump had apparently done a lot of appearances discussing politics on cable TV.  That meant he was a familiar figure to many people, not just as an entertainer, but as a political figure, although he got a lot less attention than Cruz, Walker, or Rubio in "serious" news.  That familiarity probably helped him to get to the front of the pack.

[Data from the Roper Center for Public Opinion Research]
Posted by David Weakliem at 3:22 PM No comments:

This morning I was thinking that it was about time for a post, when I read an opinion piece by Christine Emba that mentioned an "epidemic of loneliness."  She linked to a column by George Will, which quoted liberally from a book by Senator Ben Sasse.  That book, and more generally the claim that loneliness is on the rise, has received a good deal of attention.  As I have pointed out before, there is no evidence that loneliness is rising, and some that it is falling.  (Claude Fischer has made the same point several times, most recently here). However, there are few repeated survey questions about feelings of loneliness.  If people are having less contact with family, friends, and neighbors, it might be reasonable to suspect that loneliness is on the rise despite the lack of direct evidence.

Since the 1970s, the General Social Survey has had questions about "how often you spend a social evening with" various kinds of people:  "someone who lives in your neighborhood," "friends who live outside the neighborhood," and "relatives."  The questions are on a seven-point scale going from never to almost every day, and I recoded them so that higher means more often.  Because people often say that the negative trend is mostly among the "working class" I calculated the average separately for people with and without college degrees (the blue line is without and the red line is with a degree).  The means for spending an evening with neighbors: 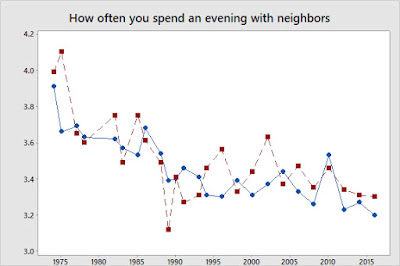 A downward trend for both groups--maybe there is something to the idea of an epidemic of loneliness? 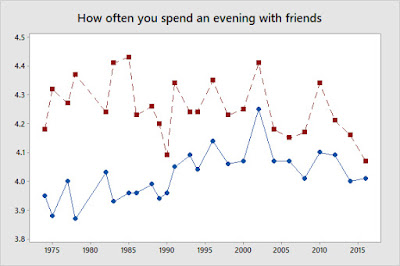 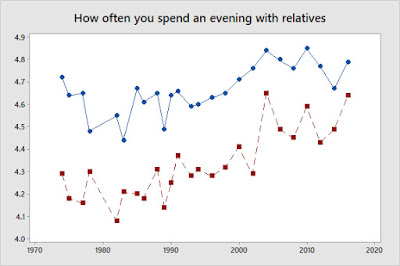 Relatives:  a pretty clear upward trend for both.

So in addition to the lack of direct evidence of an epidemic of loneliness, there is evidence against the idea of a general decline in social contact.

Loneliness is a real social problem, and claims of an epidemic seem to be more effective in getting people to pay attention than just saying that something is a problem and it hasn't been getting enough attention.  So in that sense, claims that loneliness is rising don't do any harm and may do some good.  However, they are often offered as an explanation of rising political polarization (as in Sasse's book).  In this respect, they are harmful because they divert attention away from the real causes of polarization, which I think involve political and media elites, especially on the conservative side.

Last week I read a column by Timothy Egan about books by J. D. Vance and Tara Westover, which he said were "guides to a Trumpland that is terra incognita to most Americans."  Vance grew up in southern Ohio and Westover grew up in Idaho.  A couple of days later, I read a column by Jill Abramson saying that reporters should "report the story from the places where the pro-Trump and Trump-curious live." She didn't say precisely where those were, but referred to the "heartland" and "rural America."  These reminded me of an observation I have made before, which is that you don't have to travel all that far to find places where most people voted for Trump, even if you live in Manhattan or Washington, DC.  (There are parts of the country where you have to travel a long way to find places where most people voted for Clinton--see this map).

For example, Connecticut is divided into 169 towns:  Trump got more votes than Clinton in 81 of those.   He won some of them by big margins, getting as much as 68% of the vote (see the map of election results here).  What sort of places were they?  They tended to be more rural:  here is a scatterplot of Republican share of the two-party vote by population density. 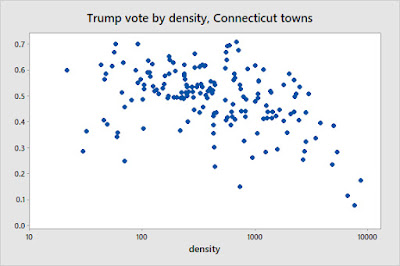 What about income?  At the state level, there's a substantial negative correlation between average household income and Republican support; among Connecticut towns it was negative but small (-.11).  The town data I downloaded also had median household income, and the correlation between with Republican support was only .04.  But in an idle moment, I divided mean by median income and found  a pretty strong relationship: 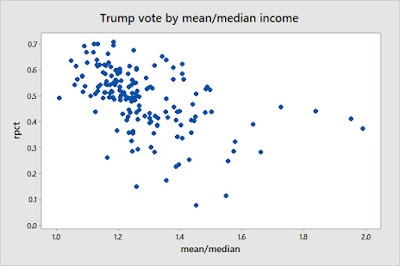 Mean divided by median is a measure of skewness, but given the typical distribution of income, it could also be regarded as a measure of inequality--that is, Republican support was lower in places with a bigger gap between the top and the middle.  I'm not sure what to make of this relationship, but it seems potentially interesting.

In most accounts, urban/rural differences in Republican support are treated as a matter of economics:  rural areas are falling behind, and therefore people feel angry.  But Connecticut towns are small, averaging only 25 square miles.  Also, even the biggest metropolitan areas in Connecticut aren't all that big.  So regardless of where you work, you are in reasonable commuting distance of urban, suburban, or rural places.  This point suggests that the urban/rural differences are mostly about preferences--the sort of people who decide to live in low-density areas are the sort of people who vote Republican.  This possibility has sometimes been noted, but it hasn't received much attention.  I think that's because of the tendency represented by Egan and Abramson--exaggerating the geographical distance between "red" and "blue" America.  (I think they also exaggerate the social distance, but that's a topic for another post).

Posted by David Weakliem at 1:45 PM No comments: