Maybe he had a point

In writing my recent posts on inflation, I recalled an obscure article I read when I was in graduate school (Tjerk Huppes, "Anomie and Inflation," in Economics and Sociology:  Towards an Integration, edited by Tjerk Huppes, 1976).  The article argued that contemporary (at the time) inflation was the result of a breakdown of norms ("anomie").  Basically, the idea was that traditional standards that people had accepted in various areas of life were breaking down, resulting in conflict, and conflict over wages and economic rewards produced inflation.  His evidence was that several "indicators" of anomie (suicide, homicide, divorce) were strongly correlated with rates of inflation over the period 1960-74.  Having taken a couple of courses in quantitative methods, I spotted the obvious statistical problem--all of the variables had a strong trend over the time period, so of course they had a high correlation.  I recall adding some more recent data, trying it again, and discovering, much to my surprise, that the apparent relationship still was there.

Now there's been a lot more time for data to accumulate, so I looked up data on homicide, divorce, and inflation from 1950 until the latest year available (2009).  Suicide is the classic measure of anomie, but it was harder to find annual data, so I left it out.  I constructed an index of "anomie" that combined homicide and divorce, and regressed inflation on anomie and unemployment.  With a correction for first-order autocorrelation (basically, inertia in everything else that affects inflation, here are the results:


Posted by David Weakliem at 7:49 PM No comments:

Is the stock market fair?

38% said it was fair to all, 52% that it unfairly benefited rich investors, and 10% didn't know.  A CBS News poll in May 2010 asked the same question.  This time, the numbers were 23% fair, 64% favors the rich, and 13% don't know.  CBS News asked the same question in November 2010, with exactly the same results:  23-64-13.  That is, there was a substantial shift towards saying that it unfairly benefits the rich.  This probably shouldn't be surprising, but given the popularity of the claim that people reacted to the recession by blaming the government rather than Wall Street, it's worth mentioning.  It would be interesting to see if the loss of confidence occurred across the board or was more concentrated in certain groups, but a breakdown isn't available for the later surveys.
Posted by David Weakliem at 6:00 PM No comments:

Who's afraid of inflation

So moderates were somewhat less worried than either liberals or conservatives.  That's surprising:  among economists and politicians, conservatives are more likely to warn about inflation.  And as with confidence in institutions, moderates aren't in the middle.
Posted by David Weakliem at 6:26 PM No comments:

Currently the annual inflation rate (using the Consumer Price Index) is 2.2%.  Over the last 25 years, it's averaged 2.9%.  Given that history, I'd think we could pat ourselves on the back and say we've got that problem under control before turning attention to other matters (like unemployment).  However, a lot of political figures and commentators seem to be worried about the danger of renewed inflation.  I'm not sure about the balance of opinion among professional economists, but at least some of them seem to be concerned too.  What about the general public?  Between 2001 and 2009, the Gallup poll frequently asked people what they thought would happen with inflation in the next six months:  would it go up a lot, go up a little, remain the same, go down a little, or go down a lot?  If you count those as 5, 4, 3, 2, and 1 points, you can can calculate a summary score.  If the score is 3 the average persons thinks it will stay the same; the higher the score, the more people expect it to go up.  Here is a graph of the scores: 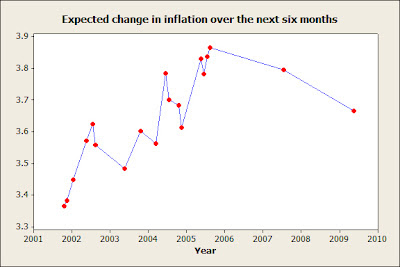 Expected inflation increased pretty steadily until 2005, then dropped in 2007 and dropped again in 2009.  The drop at the end coincided with the recession, but over the whole period expected inflation had no connection to the unemployment rate, or to the current inflation rate.  Unfortunately Gallup doesn't seem to have asked the question after 2009, but at least we can say that the public didn't react to the stimulus package of early 2009 by getting more worried about inflation.
Posted by David Weakliem at 7:07 PM No comments:

The Public, LBJ, and Civil Rights

A Harris Poll in June 1965 asked a number of questions about civil rights.  This survey occurred a few months after the Selma-Montgomery march, and while the Voting Rights act was moving through Congress.  That is, the movement was still basically about ending legal segregation and opening up voting rights, especially in the South.  President Johnson was popular, with approval ratings of 65-70 percent.  In the Harris survey, 19 percent said he was doing an excellent job, 45% said "pretty good," 21 percent "only fair" and only 9 percent "poor."  On "handling civil rights and the race problem," people were positive but less enthusiastic:  15% excellent, 38% pretty good, 24% only fair, and 16% poor.

There was a question about the pace of "things that have been going on lately with Negro rights":  40% said "too fast," 27% "about right," 16% "too slow," with 16% not sure.    Another question asked who respondents sided with in "recent show-downs in Selma, Alabama, about Negro voting rights."  48% chose "civil rights groups," 20% the "State of Alabama," 18% volunteered that they didn't side with either, and 12% weren't sure.  Another asked about charges of "widespread Communist infiltration into the civil rights movement":  23% said there were "a lot" of Communists in "the Negro groups demonstrating for civil rights," 31% said "some, not a lot," 13% "only a few," and 13% "almost none," with 18% having no opinion.  When asked to choose among six statements describing Governor George Wallace, 37% chose a favorable one, 37% an unfavorable one, and the rest said that they didn't know.

If I had to summarize these results, I'd say public opinion was no more than weakly positive.  And these figures count black respondents, although they made up only 5.5% of the sample (Harris surveyed only registered voters).


Posted by David Weakliem at 7:20 PM No comments:

The data Gordon used, the General Social Survey, has questions about confidence in a number of different institutions.  I picked ten that were asked frequently enough to discern clear patterns.  On most of them, there is a left-right difference:  for example, people who call themselves "extremely liberal" have the most confidence in labor, followed by those who call themselves "liberal," and so on down to "extremely conservative."  Controlling for this, the two "extremes" tend to have less confidence in nearly all institutions (organized labor was the one exception).  What about moderates?

"More favorable" and "less favorable" doesn't necessarily mean that moderates are the most or least favorable group, just that they are more or less favorable than would be expected from their position in the middle.  On labor, for example, moderates are about the same as people who call themselves "slightly liberal," and considerably more favorable than those who call themselves "slightly conservative."  To summarize:  moderates have definite likes and dislikes, but it's hard to see a logic behind the pattern.

Posted by David Weakliem at 10:06 PM No comments: