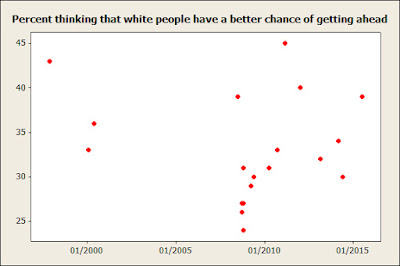 It seems to fluctuate without much pattern except for a stretch from October 2008 until about 2010.  Presumably the cause was Barack Obama's election as president (by the second half of October, it seemed pretty clear that he was going to be elected).  Logically, it's not reasonable for the accomplishment of one person to have much affect on views about the chances of blacks and whites in general, but I can understand why it had an impact.  The interesting thing is that the impact doesn't seem to have lasted.

[Data from the Roper Center for Public Opinion Research]
Posted by David Weakliem at 4:59 PM No comments:

In 2010, a PSRA/Newsweek poll asked, "Would you personally favor or oppose a law making hiring discrimination based on appearance illegal?"  46% said favor, 49% oppose

It also asked, "Some jobs require employees to be the 'face' of the company at retail stores or in sales. Do you think companies should or should not be allowed to hire people based on their looks for some jobs?"  39% said allowed, 55% said not be allowed

I'm posting this to remind myself to include them for a longer post that should appear in the next week or two.
Posted by David Weakliem at 5:04 PM No comments:

In the last couple of months, there has been a lot of discussion of the 1994 crime bill, mostly saying that it started or accelerated a trend to mass incarceration.  I was going to write about that, but several stories in the last few days have made the point I was going to make, which was that the rate of imprisonment started to rise in the mid-1970s, and the most rapid increase occurred before 1994 (see this article and more discussion and statistics here).

So instead I'll go back to the time when it actually started.  In 1973, the Gallup Poll asked:  "The governor of a state has proposed that all sellers of hard drugs such as heroin be given life imprisonment without the possibility of parole.  Do you approve or disapprove of this proposal?"  71% of the people with an opinion said they approved (only 4% had no opinion).

Support was strong among both Republicans (77%) and Democrats (68%).  It was a little lower among college graduates (62%) and younger people (59% among people aged 26 and under).  It was also somewhat lower in New England (57%) and the Middle Atlantic (67%).  The regional differences are interesting, because the governor in question was probably Nelson Rockefeller--New York soon did pass a law that was not quite as draconian as the proposal in the Gallup question, but pretty severe.  There were no clear differences between residents of urban and rural areas.  Finally, there were differences by race:  72% of whites, 66% of black women, and 55% of black men, said that they approved (the interaction between race and gender is statistically significant).

Although there are some group differences, and they are all in the direction you'd expect, they were not that large, and a majority of every group I looked at was in favor of the proposal.

[Data from the Roper Center for Public Opinion Research]
Posted by David Weakliem at 10:16 PM No comments:

Recently a number of people have claimed that anti-black prejudice is a key factor in support for Donald Trump:  for example, Sean McElwee and Philip Cohen and Matthew Yglesias (thanks to my esteemed friend Robert Biggert for the references).  I'd been skeptical of this in the past, but after looking at the data in the 2016 American National Election Studies Pilot Survey, I have to agree that it's true.  For example, ratings of the relative laziness of blacks and whites predicts support for Trump almost as well as position on how many immigrants should be allowed into the country.

But why is Trump popular now?  Anti-black prejudice doesn't change much from year to year, but this race for the Republican nomination is a lot different from the ones that preceded it (remember how people used to say that the Republicans always chose the person who'd finished second last time?).  Another way to look at it is to consider only people who don't display anti-black prejudice.  In the ANES, Trump gets 49% of the preferences among people rate blacks as lazier than whites, and only 30% among people who see no difference, but 30% still puts him in first place in that group, well ahead of the combined totals of the next two (Cruz and Rubio).*

Even setting Trump aside, there are some unusual things about this contest.  One is the strong showing of Ben Carson--although he eventually faded, he held up remarkably well considering his lack of experience, weak organization, and generally casual approach to campaigning.  Another is the uniform failure of the "establishment" candidates: Scott Walker, Jeb Bush, Chris Cristie, Marco Rubio, and maybe a few others who I'm forgetting now.  Of course, you could say that they were just weak candidates, and I'd agree about some of them, but only a year ago a lot of people were talking about the "deep bench" that the Republicans had.

So although race helps to explain who supports Trump, I don't think it explains why there's a lot of support for Trump (or someone like him) now.  To explain that, I would turn to an issue I've written about before:  negative attitudes towards the government.  The ANES has a number of questions that can be used to form an index of confidence in the federal government since 1952, and 2012 was the lowest ever.  The previous lows were in the 1970s and 1992-6, when there were strong insurgent movements from the right (Reagan's challenge to Gerald Ford in 1976, and surprising showings by Pat Buchanan in 1992 and 1996).  That is, outsiders from the right tend to do well when confidence in "Washington" is low.

Although no one has asked the whole set of questions since 2012, one of them "How much of the time do you think you can trust the government in Washington to do what is right," has been asked in several surveys, and the downward trend seems to be continuing.  Hopefully the final ANES survey will ask all of them, and my guess is that the overall score will match or surpass the 2012 low.

*This is based on two five-point scales, one asking people to rate blacks and another asking them to rate whites.
Posted by David Weakliem at 8:41 PM No comments: