Livin' in the USA

This came to mind when I was composing a post in which I said that "American society has become a lot more egalitarian over the last 60 years or so."  It didn't quite fit there, but I thought it still deserved a spot.

When Chuck Berry died in March 2017, the New York Times gave him and his contributions to American popular music a lot of attention.  That led me to wonder how much coverage they gave him when he was making hit records.  In the 1950s, he got only one mention, in a brief (four-sentence) wire service story on August 29, 1959 entitled "Negro Singer Jailed| Accused of trying to date Mississippi white girl."  After playing a dance, Berry allegedly asked a young woman (aged 20) for a date.  He  said it was a misunderstanding, but was held without bond "while authorities conducted an investigation."  The story explained that Berry "was popular among the high school set for recordings such as 'Maybellene' and 'Memphis, Tennessee.'"

The next mention came in September 1963, when he was included in a list of rhythm and blues musicians.  There were a few more incidental mentions in 1965.  Overall, it's clear that in the late 1950s and early 1960s, the New York Times didn't think that Chuck Berry was someone that its readers would or should know about.
Posted by David Weakliem at 5:06 PM No comments:

As discussed in my last post, spending directed at helping the poor has increased, not declined, in the "neoliberal period" (since 1980).  What about regulation of business?  I found a study that gives estimates of federal spending on regulation since 1960.  It distinguishes between "social regulation," which "includes regulatory agencies that address issues related to "health, safety, and the environment" and "economic regulation," which "is more likely to be industry-specific."  Here are the figures for spending on economic and social regulation (excluding homeland security) in constant (2009) dollars. 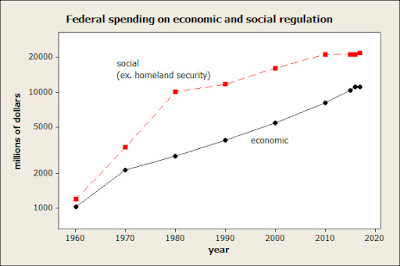 So can we discard the whole idea of "neoliberalism"?  I wish the answer were yes, because I dislike the term (partly because there are too many "neo" and "post" terms already, and partly because it is bound to be confusing to most Americans, since the "liberalism" involved is pretty much the opposite of what we now mean by liberalism).  However, there is a germ of truth in it.  The report distinguished between "financial," "general business," and "industry-specific" regulation.  Spending on the first two increased pretty steadily, but spending on "industry-specific" regulation fell between 1970 and 1980, and didn't reach its 1970 level until 2000.  As a share of the economy, it's now less than it was in 1960.  At one time, there was a lot of regulation of prices and operations in industries like airlines, interstate trucking, and communications.  This was cut back in the late 1970s, and much of it hasn't been restored.  As I recall, the deregulation movement was supported by both conservatives and a significant number of liberals (who argued that regulatory agencies tended to be "captured" by the industries they were supposed to regulate).  You could say that the newer form of liberalism is more inclined to accept that markets are an effective way of producing goods and services, but not more inclined to accept the market distribution of income.  This is an important change, but it's not a simple move to the right.
Posted by David Weakliem at 10:23 PM 1 comment:

In an interview published in the New York Times last week, Noam Chomsky spoke of "the shift of both parties to the right during the neoliberal period."  There's nothing remarkable about that--I've read many similar statements--but for some reason I started wondering what you would find if you looked for evidence of a move to the right.

A reasonable basic definition of left and right (on economic issues) is that the left is in favor of direct government assistance to the poor.  One major program of assistance to the poor is food stamps (SNAP).  The figure shows real per-capita spending on food stamps (2010 dollars) between 1969 and 2016.  It was about 70% higher in 2016 than in 1981, the year Ronald Reagan became president. 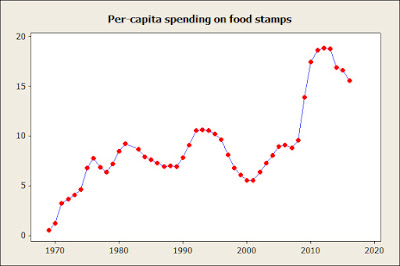 As everyone knows, Bill Clinton promised to "end welfare as we know it," and in 1996 signed a bill placing restrictions on welfare.  This figure shows federal spending on AFDC/TANF from 1975 to 2011.  There has been a slight upward trend since 1981, but the population has grown too, so basically there has been little change.  It is interesting that the 1996 reform didn't have any obvious impact on spending. 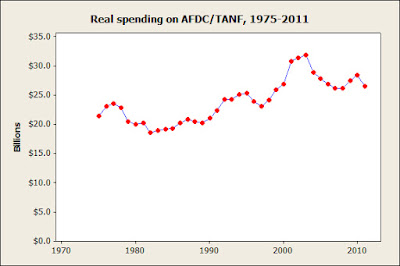 Two other programs that aid poor people are the Earned Income Tax Credit and the Child Tax Credit. 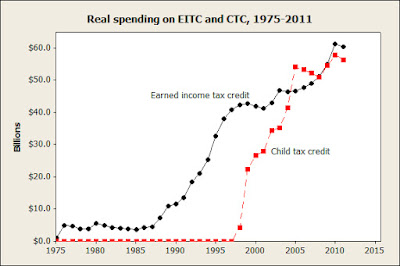 Spending on both has increased greatly during the "neoliberal period" (the CTC didn't exist until 1997).  Also notice the numbers on the vertical axis--total spending on the EITC and CTC is now about four times as large as TANF.

For disability, see this report.  Both the percent of working-age people getting disability and the average payments per recipient have increased pretty steadily since 1970.

Spending to help the poor has increased substantially the "neoliberal period."  You could argue about whether this change should be called a move to the left in policy--declining work opportunities for less skilled people means more government assistance is needed to produce the same standard of living for the poor.  But it's not a move to the right.

What about regulation of business?  I'll look at that in my next post.

Posted by David Weakliem at 2:10 PM No comments:

It is what it is

Among people who had graduated from high school but not gone to college, about 20% agreed with the first statement and 75% with the second; among people with graduate education, 44% agreed with the first, and 50% with the second.  The item was part of a series of about 12 with the same format, covering a variety of issues.  The correlation between education and opinions on fair treatment vs. take advantage was the strongest of all items, with one exception:  whether immigrants strengthen the country or are a burden on the country.

Most analyses of Trump's appeal to less educated voters hold that it was about race, or gender, or a long period of slow wage growth.  The alternative, that it was about what he talked about--taking a hard line on immigration and following an "America first" policy--hasn't gotten much attention.  But as these questions show, there's a lot of support for those general sentiments, especially among less educated people.  Opinions on immigration have become more favorable, as I have noted, but are still mostly negative. Unfortunately the fair treatment/take advantage question has not been repeated, but  I was surprised to see how lopsided the distribution of opinions was--even among people with graduate degrees, people who thought that other countries took unfair advantage were more numerous and more likely to feel strongly about it.  Trump seems to have found a strong current of opinion that no one else had tried to appeal to.  Although comparable questions are not available for a long period of time, there is some evidence that it has been around for quite a while.

[Data from the Roper Center for Public Opinion Research]
Posted by David Weakliem at 6:28 PM No comments: