There has been some debate lately about whether conservatives are more inclined to believe in conspiracy theories than liberals.  You can cite examples on both sides, but then you get into questions of deciding exactly how irrational different beliefs are (sometimes there really are conspiracies).  So I have sometimes looked for questions about non-political conspiracies.  I didn't have much success until a few days ago, when I found a question about the Janet Jackson's performance at Super Bowl 2004:  "Based on what you have read or heard, do you think that executives at CBS, the network that aired the Super Bowl, knew in advance that Janet Jackson’s breast would be exposed during the halftime show, or do you think they were unaware that this would happen?"  About 19% did, 72% did not, and 8% said they didn't know.  There weren't may group differences:  education, race, age, gender, and party preference didn't seem to matter.  Hispanics were more likely to think they knew (31%).  There was no difference between liberals and conservatives, but ideology made a difference:  29% of the people who said they were "very liberal" or "very conservative" thought that they knew, compared to 21% of those who called themselves liberal or conservative and 17% of those who called themselves moderate.
Posted by David Weakliem at 11:18 PM No comments:

A few years ago, I looked for data on corruption in the states.  I thought there would be something along the lines of Transparency International's data for different countries, which are based on surveys of people who have done business in those places.  To my surprise, I couldn't find anything.  The other day, I saw a story about the State Integrity Investigation, which ranked states on having and enforcing anti-corruption measures.   That reminded me that I had once seen two questions on public opinion from the 1930s that seemed relevant.  One asked "does politics play a part in the handling of relief in your locality"; the other, "should government positions . . . be given to those who help put their political party into office or those who receive the highest marks in civil service examinations?"  The rankings on the these two measures are almost completely uncorrelated, but here are the top and bottom on each ("top" as states in which people think that politics plays a part and more people think that positions should go to those who help their party).  The rankings on whether people thought that politics played a part are a reasonably good match with my (vague) impressions about the comparative corruption of the states.  The main factor for opinions about whether jobs should go to those who help their party was region:  that opinion was more popular in the South and border states.

As many people have noticed, the Republican candidates for president have praised Ronald Reagan and said very little about other Republican presidents, even popular ones (it's a long time since I heard anyone claim to be an "Eisenhower Republican").  Even Democrats, notably Barack Obama, have said some positive things about him in recent years.  When did this start?  A number of surveys, mostly Gallup, have asked "How do you think Ronald Reagan will go down in history--as an outstanding president, above average, average, below average, or poor?"  (have did not mention "average" as an option but allowed people to volunteer it, and one asked for a rating of his "leadership" qualities, but there was no evidence that these differences affected the responses).  Here is a figure showing his average score, using +2.....-2 for the different responses. 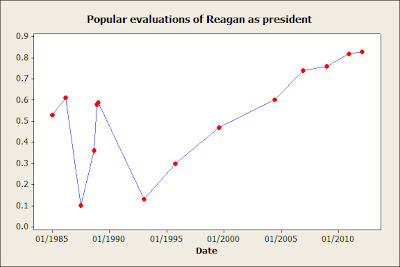 His low point was July 1987, when he was under criticism for a variety of reasons, especially the Iran-Contra affair (on July 13, 1987 the New York Times ran a story entitled "GOP Hopefuls Backing Away from Reagan,' which makes interesting reading today).  His reputation had bounced back by the time he left office, and unfortunately there was a four-year gap before it was asked again.  At that time, he was almost back to his 1987 low, but since then it's been steady improvement:  each of the last four times it's been asked, he's set a new high.  I wonder if that's a common pattern, or something unique to Reagan.
Posted by David Weakliem at 8:38 PM No comments:

The life of the mind

As I mentioned in my last post, Charles Murray holds that social class differences in intelligence are increasing.  The General Social Survey has measures of vocabulary knowledge, which is a surprisingly good measure of IQ, and occupation.  The GSS computes "occupational prestige" scores from a person's occupation.  I computed a measure of the gap between classes (the coefficient in a regression of prestige on vocabulary score.  The results: 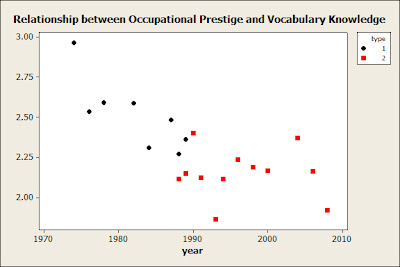 That looks like a clear decline, not an increase.  In fairness, I should point out that they changed the prestige scores (indicated by the different colors) and based on the two years for which they computed both, the relationship is weaker with the second form.  If you adjust for that, then the evidence for a decline becomes weaker.  But no matter how you look at it, the relationship isn't getting stronger.   While this is just a quick analysis based on one short test, Herrnstein and Murray's case was just a plausible story illustrated with some anecdotes.  I haven't read Murray's new book yet, but unless he's found some better evidence, it seems like intelligence is one way in which America is not coming apart.
Posted by David Weakliem at 10:03 PM No comments: