How to become a millionaire

In 1979 and 1992, the Roper Organization did surveys that contained a number of questions about millionaires.  For one, they handed people a card and asked people "which of these fields of work produces the most millionaires."  The results (multiple responses were allowed, so they add to more than 100%).

The biggest change between 1979 and 1992 involves sports, which isn't surprising because salaries did increase in professional sports and this development received a lot of publicity.  The increase in the percent naming government and politics may reflect rising cynicism about politics.  I can't think of a good reason why the professions had a large jump.  People also missed one important development--the increase of high earnings in banking and finance.  But the most remarkable thing to me was that 45-50% of the people named organized crime.  I thought the 1979 figures were some kind of mistake at first, but that's what the numbers said.
Posted by David Weakliem at 7:10 PM No comments:

There's been a controversy about the ratio of federal debt to GDP--is there some level beyond which more debt hurts economic growth?  But I haven't seen any discussion of the ratio of interest payments to GDP, which seems like a more straightforward issue--the more you have to devote to interest payments, the less you have left over for everything else.   Since it's spring break, I have time to indulge my curiosity, and I did some calculations using the National Income and Product Accounts.

First, this is the annual deficit (or occasionally surplus) as a percent of GDP.   In 2010-12, deficits have been much higher than at any previous time except the height of World War II. 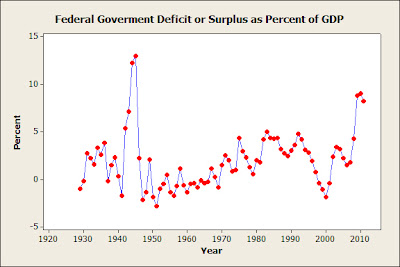 Of course, you can argue that things aren't as good as they seem--that if interest rates go up, we'll be stuck with higher payments.  But looking at this figure, it's hard to see a crisis. 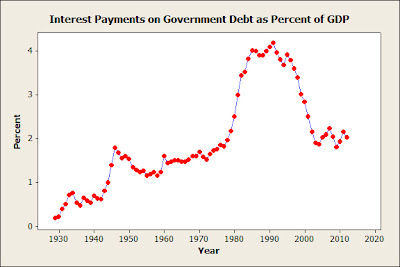 Britain vs. America, round 3

In 2010, I had a post about Americans' increased knowledge of a number of historical figures between 1952 and 1975.  Then about a month ago I discovered that the same questions had been asked in a British survey from 1955.  The British respondents in 1955 were about equal to the Americans in 1975, despite having less schooling.  Now I have found that the questions were also asked in British surveys from 1967 and 1975.  The results (I'll just show the average number of correct answers out of ten names rather than the percent answering each one correctly):


Both the United States and Britain improved over the period, but the British maintained a substantial lead.

However,  there was one case in which Americans did a lot better:  Gutenberg, who is not included in these averages because the 1955 British survey didn't ask about him.  The 1967 and 1975 surveys did, though, and only 8% and 5% knew who he was.  In the United States, 24% knew who he was in both 1952 and 1975.  I don't know why--I can't think of an reason that Gutenberg would receive a lot much more attention in American schools, but maybe he did.
Posted by David Weakliem at 5:37 PM No comments:

Room at the top

The survey I mentioned in my last post also asked people about their chances of becoming rich:  9% said "very likely," 19% said "fairly likely," 27% said "not very likely," and 45% said "not at all likely."  Only 1% volunteered that they were rich now. Applying the same subjective probabilities I used last time, this produces an average expected probability of 23.6%.

The survey also asked about the annual income needed to make someone rich.  Answers ranged widely, but the  median was somewhere between $100,000 and $200,000 dollars a year (in 1990).  Unfortunately it didn't record the exact number, so that leaves a lot of uncertainly.  However, the distribution clearly suggests that the median is in the lower half of the range, somewhere between $125,000 and $150,000.  That would be about the top 4%.  However, since there's turnover among people with high incomes and incomes tend to rise over the course of a working life, a considerably larger number will be in the top 4% at some time (I'd guess 8 or 10 percent).

So people seem to be optimistic about their chances of becoming "rich."  That raises the question of why--is it because they think there are a lot of people with (relatively) high incomes or because they think they will do better than almost everyone else?  That is, do the people who expect to become "rich" expect to make it to  the top 20% or the top 1% (say).  I'll see if I can find any information on that and discuss it in a later post.
Posted by David Weakliem at 5:29 PM No comments:

You may be rich, you may be poor

People usually have a pretty high opinion of their own talents and overestimate  their control over events.  As a result, you might expect them to overestimate their chance of upward mobility and underestimate their chances of downward mobility.  There have been a few survey questions about the chance of getting rich (see my recent paper in Comparative Sociology for more discussion of them), but I know of only one on the chance of becoming poor.  This appeared in an ABC News/Washington Post survey in 1990.  The question was How likely is it that you will ever be poor: Very likely, fairly likely, not too likely or not likely at all?"  12% said "very likely," 12% said "fairly likely," 34% said "not very likely," and 36% said "not at all likely."  5% volunteered that they were poor now.  The survey did not ask them how they defined poor, but a couple of years latr the General Social Survey asked people to give a "poverty line" for several different family types.  The popular estimates were a little bit higher than the official poverty line, and I estimate that roughly 20% of people are poor by the popular estimates.

The survey didn't attach probabilities to the terms, so you can't make a precise comparison between expectations and reality.  But if it seems reasonable to me to say that "very likely" is an 80% chance, "fairly" is 50%, "not very" is 20%, and "not at all" is 1%; that gives a sum of  27.8%. So people arseem to be pretty realistic.  Of course, there's some turnover in the poor population, so the chance of ever being poor is higher than the proportion of poor at any point in time  When you take that into account, people may underestimate their chance of being poor, but not by much.
Posted by David Weakliem at 5:55 PM 2 comments:

Ye have the poor with you always

From time to time, the Gallup poll has asked people "Do you think poverty will ever be done away with in this country?"*  The results:

At all times, the overwhelming majority said no.  However, I'm pretty sure that the differences among the times are statistically significant.  It's hard to make definite statements about patterns given the small number of occasions on which the question was asked, but it's interesting that the three highest "yes" totals were the three earliest ones.

*The 1965 survey said "in the United States" and specified within the next 20 years.
Posted by David Weakliem at 7:29 PM No comments: