Scott Walker, an all-but-declared candidate for the Republican presidential nomination, didn't graduate from college.  That's unusual--as far as I know, the last "major" candidate for president without a college degree was Paul Simon, who sought the Democratic nomination in 1988.  Ted Cruz, a declared candidate for the Republican presidential nomination, got an undergraduate degree from Princeton and a law degree from Harvard.  That's not unusual--George W Bush had degrees from Yale and Harvard.  But most Republicans with degrees from elite schools have downplayed them--Bush talked about Midland, Texas, a lot more than he did about Harvard or Yale-- while Cruz has made them a central part of his story.

Do voters care about this sort of thing?  A 2007 Pew survey asked respondents if they would be more or less likely to vote for a candidate with various characteristics.  One was "attended a prestigious university such as Harvard or Yale," and another was "did not attend college."  People were split on a candidate who hadn't attended college:  49% said it would make no difference and 47% said they'd be less likely to support the candidate (only 3% said they would be more likely to).  Most people (74%) said that attending a prestigious college wouldn't make any difference; 20% said more likely and only 5% less likely.

A common perception is that liberals value educational credentials, while conservatives are less interested, or maybe even hostile.  In fact, that was why I started thinking about the issue:  would Cruz's association with elite colleges hurt him with "the base"?  According to these questions, there might be some difference in the expected direction, but it's small,  Another potential influence is education:  you could make arguments for an effect in either direction.  It turns out that, less educated people may be a little more likely to say that not attending college wouldn't matter; education has no clear effect on views about having attended a prestigious university.

I had no reason to expect gender to make any difference, but since nothing very interesting was going on, why not try?  Gender didn't make much difference for reaction to a candidate who hadn't attended college, but made a substantial difference for reactions to one who attended a prestigious university:  8% of men, and only 2% of women, said they would be less likely to support one.  To put it another way, more than three-quarters (60 out of 79) of the people who said they would be less likely to support the candidate were men.

Even among men, attending a prestigious university was much more likely to be a plus than a minus, but the gender difference needs an explanation.  My thought is that a "man of action, not words" image has appeal to some men, and there's no real parallel to that image for women.

[data from the Roper Center for Public Opinion Research]
Posted by David Weakliem at 7:02 PM 2 comments:

In March 1951, the Gallup Poll had a question in which they gave people a picture (at that time, the polls were done in person rather than over the phone) and said:  "Here are pictures of six different girls all dressed alike.  I'd like you to look at each one and tell me which ONE you think is most beautiful." #4 was the most popular choice with about 57%, followed by #3 and #5 with about 15% each.   The others were at 5% or less.

Preference varied by education:  #4 was uniformly popular in all groups, but  #3 was the choice of less than 10% of the people with a grade school education and 28% of the college graduates, while #5 was the choice of more than 20% of those with a grade school education and only 5% of the college graduates.  There were similar, although less dramatic, differences by occupation and economic level:  #3 got more support in the "higher" groups and #5 got more support in the lower.  There were also big differences by race:  among blacks, #5 led #3 by about 30%-8%; among whites #3 led by about 16%-13%,

At this point, I should show the picture, but I don't have a copy and have never seen it.  It's not included in the documentation at the Roper Center.  The Gallup Poll used to have a newspaper column in which they highlighted findings from their polls, but I did a search and couldn't find it there.  The question is prefaced with "we have been asked to find out", which suggests they did it for some client.  Maybe it was a magazine that published an article about the poll, but if so I haven't found it.  Or maybe it was a commercial client (they occasionally put "market research" questions in their regular polls), in which case it's probably lost for good.

In conclusion, there seems to be something interesting going on, but I have no idea what it is, and little hope of ever finding out.

[Data from the Roper Center for Public Opinion Research]
Posted by David Weakliem at 8:26 PM No comments:

In a review of Robert Putnam's new book, Jason DeParle (a reporter for the New York Times) says "where Putnam succeeds is in describing the diverging life chances of children in rich and poor families. ('Rich' parents finished college; 'poor' parents have high school degrees or less.) "   Of course, education is not really equivalent to riches, as many adjunct professors could tell you, but this led me to wonder exactly how much overlap there is the incomes of different educational groups.

It's easy to find statistics on differences in average income by education, but harder to find information on the whole distribution.  Here is a table, which I made from Bureau of Labor Statistics data on "usual weekly earnings of full-time wage and salary workers."

For a more detailed comparison, I assumed that earnings followed a log-normal distribution (which is usually approximately true except in the highest levels) and estimated the mean and standard deviation from the data above.  The resulting distributions are shown in this figure (I scaled it up to earnings per year): 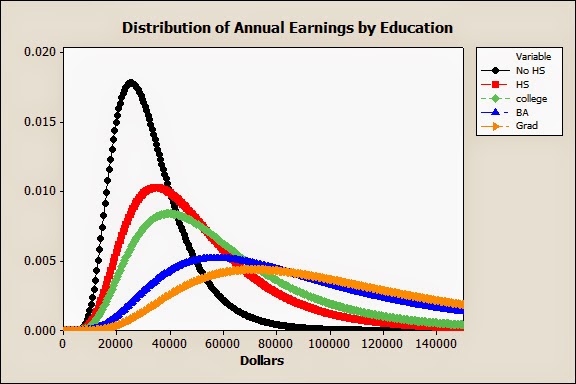 During the 1930s and 1940s, Fortune magazine sponsored a series of surveys conducted by the Roper Organization.  It was probably the most important early series after the Gallup Poll.  Unfortunately it stopped in 1949--the Roper Organization continued, but most of the questions were never repeated.  However, in 1990 Fortune sponsored a survey that replicated some questions from 1939 and 1940.

"Do you think your son's or daughters opportunities to get ahead will be better than, or not as good as those you have" [or "If you had children," etc.]

Do you think the years ahead seem to hold, for you personally, a good chance for advancement or the probability of no improvement over your present situation?

Putting them together, optimism about the future remained about the same.

Do you think your opportunities to succeed are better than or not as good as your father had?

People in 1990 were more likely to see improvement, although at both times most people were favorable.

Do you believe that a high tariff to keep out foreign goods in competition with American goods is a good policy or a bad policy?

A substantial shift towards support for free trade, although tariffs were still more popular.

Do you think the interest of employees and employers are, by their very nature opposed or are they basically the same?

A big change, and one that is the opposite to a what is sometimes said.


Suppose it became necessary to increase taxes, which one or two of these methods would you most prefer?

"Extend" means making more people liable to pay income tax (they had a fairly long description, which I won't quote).  That option wasn't offered in 1990, presumably because the share of people who had to pay income tax had increased a lot.  The big change was an increase in the share who favored increasing taxes on corporate profits.  Like the previous question, it suggests an increase in anti-business sentiment.

It's interesting to think that 1990 was 25 years ago.  I hope Fortune will do a 75th anniversary follow-up.

The New York Times had an interview with Alan Krueger and Austen Goolsbee, chairmen of the Council of Economic Advisors in the first Obama administration, about the bailout of the auto industry.  The bailout was unpopular at the time but seems to have worked out pretty well.  When asked if it was was likely to be an issue in the 2016 election, Goolsbee said no:  "when things work out, there’s a tendency toward revisionism. Didn’t Nixon get only 20 percent of the vote in 1972 according to the polling in 1975?"  Did he? I looked for surveys from 1975 that asked about vote in 1972, but found only one, so I broadened the search to include 1976.  The results:

The actual vote shares were 61% for Nixon, 38% for McGovern, and 2% for others.  Although I'm sure Goolsbee is right about the general tendency, his example doesn't support him.

Posted by David Weakliem at 9:37 PM No comments: