Back to the beginning

My first substantive post on this blog was about a question that was asked in 1950:  "If you had a son of college age and he could enter any college or university in the United States and you had enough money to send him, to which one would you most want him to go?"  Harvard took first place, which wasn't surprising, but Notre Dame was second, which was (at least to me).  I speculated that its high standing was because a lot of Catholics wanted their (hypothetical) son to go to a Catholic college.  It came back to mind this semester when I wanted an example to illustrate the point that the difference between Catholics and Protestants used to be a lot more important in American society than it is today.  So I broke the top choices down by religion:

The University of Chicago was the second choice among Jewish parents, and was just off the top ten among Protestants, but was chosen by only one Catholic parent.  I don't know enough about the history of that university to offer an explanation.

Notre Dame was tied for fifth choice among Jewish parents, and was among the top 15 among Protestants.  That could have been because of academic reputation, but football may also have been a factor.   Notre Dame had been national champions (according to the AP poll) in 1943, 1946, 1947, and 1949.  Most of the people answering the survey had not attended college themselves, and probably didn't have much information to base a response on, so some may have said Notre Dame simply because it was a name that they knew.  However, even if Notre Dame's standing was boosted by football, Catholic parents clearly had a strong inclination to favor Catholic colleges (Fordham was also in the top 10, and Boston College just missed).
Posted by David Weakliem at 4:35 PM No comments:

The future has arrived

This is partly a follow-up to a post from a few weeks ago and partly a reaction to Ross Douthat's column on working-class support for Donald Trump.  Douthat's argument is that in poor areas with a lot of social dysfunction, people who are poor don't vote at all, and people who are somewhat better off have a negative view of the welfare state--they see themselves as paying taxes to support their lazy or irresponsible neighbors.  I think he's  right, and have made essentially the same argument myself.   However, this analysis isn't relevant to the question of working-class support for Trump for two reasons:  it's not about support for Trump, and it's not about the working class.  As far as Trump, a negative view of the welfare state would lead to greater support for Republicans in general, not Trump in particular.  Poor states tend to give more support to the Republicans, but I don't think that they gave more support to Trump--if anything, Trump seems to have done better in the more affluent states. As far as class, the argument is relevant to everybody who's not at the bottom--it's not just the blue-collar worker, but the doctor, lawyer, or successful businessperson who could look around and see people who seemed to be suffering the consequences of their own bad choices.  So the analysis is about why poor areas support the Republicans, not about which individuals support Trump.

Douthat links to Nate Silver's analysis of exit poll data, which indicates that the incomes of Trump voters are not very different from the incomes of people who voted for other Republican candidates.  Trump voters do have less education, but the difference seems to be purely one of education, not income (and therefore probably not class, although as I mentioned in my last post, few surveys now ask about occupation).  Why would education be relevant to support for Trump?  This is where my post from a few weeks ago comes in.  There are a lot of issues on which many people take positions that are pretty much ignored among political elites.  One of them is illegal immigration, on which a lot of people have supported proposals to deport everyone who's here without authorization or build a wall along the Mexican border, but until the rise of Trump, those weren't taken seriously by political elites.  Another is the proposal to ban discrimination by appearance, which I discussed in the post from a few weeks ago.

What unites these issues, and a lot of others, is that there seems to be a lot of popular support for "there ought to be a law" policies:  that people should be discouraged or forbidden to do "bad" things and encouraged or required to do "good" things.  Moreover, this sentiment is often stronger among less educated people.   That may be because education affects values--e. g., education is associated with more support for civil liberties.  Another factor is that educated people may give more thought to how something would work in practice--e. g., would it really be possible to expel all illegal immigrants, or to enforce a ban on discrimination by appearance?

The gap between popular and elite opinions would seem to give a lot of opportunity to candidates who appealed to popular positions that don't get much elite support.  But usually those candidates don't go far (e. g. Tom Tancredo in 2008).  I think that's because people usually figure that the elites know what they are doing to some extent--if all "respectable" political figures condemn or dismiss a position, there's probably something wrong with it.  But when confidence in the elites is very low, like now, that barrier is gone, and there is an opening for candidates who are outside the mainstream.  And for the reasons mentioned in the previous paragraph, the non-mainstream positions may be particularly appealing to less educated voters.
Posted by David Weakliem at 8:00 PM No comments:

Trump and his trumpeters

Many stories about Donald Trump ascribe his support to "working class" voters.  But none of them cite any figures about class differences in support for Trump, for the good reason that almost all commercial surveys stopped asking about occupation sometime in the 1970s.  So if you adopt a conventional definition of the working class as people employed in manual occupations, we don't know, and maybe never will know,  if working class voters helped Trump to get the Republican nomination.   (The American National Election Studies and General Social Survey still ask about occupation, so eventually we'll be able to say something about class and the general election).

Surveys today generally ask about education and family income, and Trump clearly does better among less educated voters.  In the ANES Pilot Study, 42% of people without a high school diploma and only 29% of people with a college degree said they favored Trump*.  If you control for education--that is, compare people with the same levels of education but different incomes--there's no evidence that income makes any difference.

You could say that the conventional view is right:  since people in working-class occupations have less education than people in middle-class occupations, it's reasonable to think (although not certain) that working-class voters are more likely to support Trump.  However, speaking of a class difference focuses attention on economics; calling it an educational difference focuses attention on other factors.  For example, there's a lot of evidence that education increases support for civil liberties and acceptance of complexity and ambiguity, and those things certainly seem potentially relevant to support for Trump.  If we just had information on education, those two interpretations would be about equally credible.  But the fact that income doesn't make any clear difference after controlling for education suggests that the non-economic side of education is more important.

The usual account is that working-class voters are turning to Trump out of frustration with a long period of flat incomes.  But it's not just the working class that has experienced that--it's a substantial majority of people.  Depending on the exact time period and how you measure things, the group that's had a substantial increase in income might be as small as the top 1%, and not bigger than the top 20%.  So to the extent that economic frustration matters, it should apply to large parts of the middle class.  In fact, there is a hint in the ANES data that support for Trump is lower among people with incomes of more than $100,000, but the sample is too small to be sure about that.


*All figures refer to Republicans and Independents who leaned Republican or didn't lean towards either party.
Posted by David Weakliem at 7:58 PM No comments:

The Pew Research Center reports that polarization in opinions has increased, in the sense that there are more people who are uniformly liberal or uniformly conservative, and fewer who are liberal on some issues and conservative on others.  More exactly, they find that there was no change between 1994 and 2004, but an increase between 2004 and 2014.

The General Social Survey provides an alternative source for analysis of this issue, since it also has a lot of repeated questions.  An advantage of the GSS is that it was conducted every year (until 1994) or two (starting in 1994), making it possible to track changes more closely.  A disadvantage is that unlike the surveys in the Pew analysis, it doesn't repeat exactly the same questions.  However, I did an analysis based on the following questions*:

1. should a woman be allowed to get a legal abortion if she is married and doesn't want more children
2.  sex between two adults of the same sex is always wrong....not wrong at all
3.  favor or oppose the death penalty for murder
4. favor or oppose requiring permit for gun ownership
5.  favor or oppose school prayer
6. vote on (hypothetical) law requiring homeowner to sell to person of any race
6a.  government spending on improving the conditions of blacks
7.  should marijuana be legal
8.  should government reduce income differences 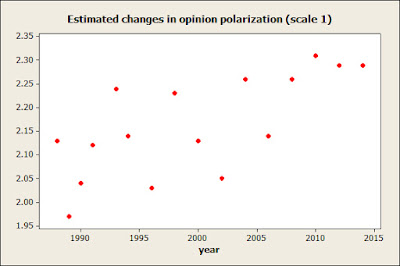 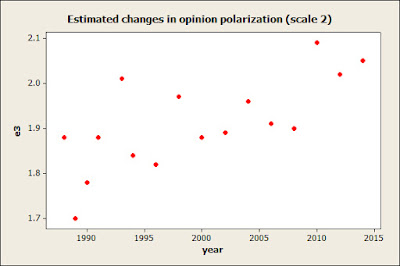 In both, the estimates vary more from year to year before 1994, because the samples were smaller.  Either way, there is a definite increase over the period.  As far as the timing, the model of a trend over the whole period fits slightly better than the model of an increase only after 2004.  However, the difference in fit is small; either one is compatible with the data.

The GSS questions go back to the 1970s, some as far back and 1972, so the analysis could be extended to cover a longer period, although they weren't all asked in the same year until 1988, making the analysis less straightforward.  In fact, I did an analysis of that about 15 years ago.  I didn't find evidence of a general trend; there were some changes in the association among opinions, but they were complicated, and I never figured out a satisfying interpretation, so eventually I gave up before publishing.  But it seems like reality finally caught up to my hypothesis.

*The numbers on the vertical axis are the eigenvalue of the first principal component.
Posted by David Weakliem at 5:50 PM No comments: