Who are the rich?

A 1997 survey by Princeton Survey Research Associates asked "Which one of the following areas of the economy do you think accounts for the largest number of new wealthy Americans?"  and offered several choices.  The percent choosing each:

It's not possible to compare these responses to reality, since the categories omit major areas of the economy (including real estate and most retail and manufacturing), and aren't always mutually exclusive (e. g., small business and computers and software).  Still, the percentage naming "entertainment and sports" is remarkably high, beating Wall Street and banking combined.  The best estimates of the occupations of rich people, by Jon Bakija, Adam Cole, and Bradley Heim, are that about 12% of the top 1% were in finance and 1.7% in "arts, media, and sports."  If you use the top 0.1%, the figures were 14% for finance and 3.5% for arts, media, and sports.  By their estimates, the biggest occupation for rich people is "executives, managers, and supervisors, non-finance".

People with higher incomes were more likely to choose "small business formation" and less likely to choose "banking and other financial services," but those are minority opinions in all groups.  The proportions choosing computers, entertainment, and Wall Street were about the same regardless of income.
Posted by David Weakliem at 8:45 PM No comments:

The survey I mentioned in my last post also asked whether people approved of the job Barack Obama was doing as president.  If you regress approval on reaction to the six terms, these are the results.

But as I've said a number of times, understanding of political terms is likely to differ by education.  Here are the results if you break the sample into people without a college degree and people with one:

Feelings progressive, liberal, conservative, and libertarian have the expected sign in both groups, but are stronger among people with a college degree--that's what you'd expect if more educated people have a better (or more conventional) understanding of what those words mean.  Feelings about socialism have a weaker association among more educated people.  That could be because "socialism" is mostly a term of abuse in American political discussion.  So some educated people who support Obama may go out of their way to say that they're not an socialist.

Education and the isms


Education makes people more negative about socialism, progressive, libertarian, and conservative, and more positive about capitalism.  "Liberal" is more complex:  people with the least and most education are more positive than people with moderate amounts.  Reaction to capitalism is the most strongly affected by education.   Among people with graduate education, capitalism gets the most positive reaction among all these terms; among people without a high school degree, it gets the least positive.  This is a surprise, since a classic theme in conservative thought is that education makes people more critical of capitalism (or in some accounts, makes them think that they could  run things better than the market).

Some of the difference probably is just  a matter of schools teaching people that "capitalism" is a name for the economic system we have in America, not changing views about that system.  But it's hard to argue that the educational system is turning people against capitalism.

Posted by David Weakliem at 8:25 PM No comments:

John Hinderaker, a conservative blogger, says "to me, the most telling incident of the campaign season was a poll that found that among young Americans, socialism enjoys a higher favorability rating than free enterprise."  The last poll I could find asking about "free enterprise" was in 2010, when 86% Americans said they had a positive reaction to "free enterprise."  It was actually higher (over 90%) among people aged 18-29.  However, there is a Pew survey from 2011 that asked for reactions to "socialism" and "capitalism"; among people aged 18-29, 52% had a favorable reaction to socialism and 47% had a favorable reaction to capitalism.

There were big differences in the reaction to "socialism":


Age differences in the reaction to "capitalism" were much smaller:

Paul Krugman suggests an alternative:  "after decades in which right-wingers have attacked long-established institutions — Social Security, progressive taxation, unemployment insurance — as 'socialism,' a lot of young people now believe them, and think that this 'socialism' thing really isn’t so bad." That sounds plausible:  a related point is that many older people probably associate "socialism" with the Union of Soviet Socialist Republics.

The March Into Socialism

Is support for socialism on the rise in America?  Looking at the outcome of the election, some  conservatives say yes (and aren't happy about it).  I remember some similar talk after 2008, but then it was forgotten in the wake of the 2010 election.  What's actually happening?  There haven't been many questions, but here's what I could find:

"Would you say you have a favorable or unfavorable opinion towards each of the following ideas... socialism?"  (Comparative Study of National Character)
c. 1990  11% favorable, 32% depends, 50% unfavorable

It's hard to be sure because of the changes in question wording, but it looks like Americans may have a more favorable view of socialism now than they did 20-30 years ago.

Posted by David Weakliem at 11:09 PM No comments:

A New York Times story yesterday pointed out that presidential candidates have appeared in only ten states since the conventions, while John F. Kennedy campaigned in 49 states and Richard Nixon campaigned in all fifty during the 1960 election.  The story said that this change reflected a decline in the number of states that are close enough to be worth fighting for and cited a few examples.  I decided to look more systematically, using all presidential elections from 1916-2008.  The figures show the interquartile range--the difference in percentage of the two-party vote between the states with fairly high (75th percentile) and fairly low (25th percentile) Democratic shares of the vote.  I show two figures, one for all states and one excluding the South. 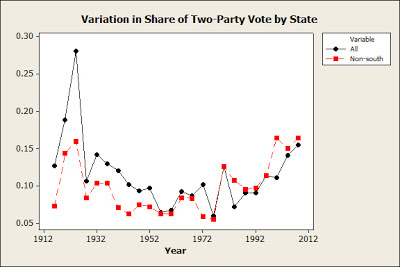 By both measures, the gap has been rising since the 1970s--that is, Democratic states are more Democratic and Republican states are more Republican.  Of course, even in 1960 both candidates had states that were out of reach, so their decision to campaign in all of them must have reflected some kind of convention or sense of obligation rather than a real expectation that they could win.  But it does seem like the states are pulling farther apart, leaving few close ones.

PS.  The unusually high figure for 1924 occurred because there was a significant third-party candidate, Robert La Follette (Progressive), who pulled a lot of votes from the Democrats in the Midwest and West.  For example, in California the Democratic candidate got only 8% of the vote, vs. 57% for the Republican (Calvin Coolidge), and 35% for La Follette.   There were 18 states in which the Democrats received less than 30% of the two-party vote.
Posted by David Weakliem at 7:07 PM No comments:

"President Obama is in electoral trouble"

In August, I saw a reference to an election forecasting model by Michael Berry and Kenneth Bickers (University of Colorado) that predicted a Romney win based on state unemployment data.  I couldn't find the full paper at the time, but after seeing another reference, I looked again and found it.  Their assessment is given in the quotation that provides my title.  The predict Obama will win only 218 electoral votes (with new data, they've revised that down to 208) and 47% of the popular vote.  It turns out that the state-level data doesn't have that much to do with the forecast--the important variable is the national unemployment rate.  According to their estimates, high unemployment costs a Democratic incumbent a lot of votes, which is why things look bad for Obama.  That's right, just Democratic incumbents--for Republican incumbents, the national unemployment rate doesn't matter.  Why do they get this result? The state-level data go back only to 1980, so the eight elections from 1980 to 2008 are the only ones they can use to estimate the model.  In that period, there was one Democrat who ran for re-election with a high unemployment rate (Jimmy Carter in 1980), and one Republican who ran for re-election with a high unemployment rate (Ronald Reagan in 1984).  Carter lost, and Reagan won big.  When you put it that way, the "evidence" that the national unemployment rate has different effects for Democratic and Republican presidents is really just one example.

But since Berry and Bickers use state data (plus DC), they have fifty-one cases in which a Democrat ran for re-election with a high national unemployment rate, and fifty-one in which a Republican ran for re-election with a high national unemployment rate, which seems like a lot of evidence.  The problem is that the cases aren't independent--to a large extent, they're just duplicates of two cases (Carter and Reagan).  On some level, this is a fairly sophisticated statistical issue.  But on another level, it's pretty simple--really surprising results (Republican incumbents aren't hurt by high unemployment) usually mean you did something wrong.
Posted by David Weakliem at 7:11 PM No comments: