1.  On Sunday, the New York Times had a piece by Alec MacGillis called "Who Turned My Blue State Red?" on the question of why poor states vote Republican.  I started reading it with low expectations, but perked up when I read "the people who most rely on the safety-net programs secured by Democrats are, by and large, not voting against their own interests by electing Republicans. Rather, they are not voting, period."

Those of us who are interested in politics tend to forget that a lot of people, and probably a majority of working class people, don't vote even in Presidential elections.  In a post last year, I suggested that working-class turnout might have declined in states like West Virginia because of the decline of manufacturing and mining, so the people who continued to vote would be the local middle class.  Although they might have relatively low incomes by national standards, they would compare themselves to the local people who didn't have steady jobs.  From that perspective, they could be drawn to the Republicans, and especially sympathetic to the idea that poor people got that way because they made bad choices:  they could think of examples from personal experience.

MacGillis  seemed to be saying pretty much the same thing.  He basically took the traditional journalist's approach of going out and talking to people--he offered some survey evidence, but it seemed sort of tangential.  But it makes me think that someone should look at changes in the relationship between class and turnout by state. 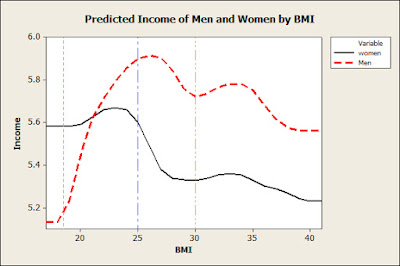 There are some interesting and unexpected things here:
1.  There is a penalty for having a high BMI, but it's not much different for men and women.
2.  Contrary to what I thought based on the figures in the previous graph, women do not benefit from being thin. Predicted income is about the same in the whole "normal" range (actually a little higher in the upper reaches, although I don't think the difference is large enough to be worth taking seriously).
3.  Men suffer a substantial loss from being "underweight."  That does match the results from my previous post.

Putting it together, it looks like men are the ones who lose the most if they don't have the "ideal" body.  I don't really believe this--the numbers of men with low values of BMI are small, so I suspect that most or all of the apparent difference is just chance variation.  But it's worth considering.


Posted by David Weakliem at 7:52 PM No comments:

Too rich or too thin?

The Behavioral Risk Factor Surveillance System, despite its ominous-sounding name, is just a survey focusing on health.  It asks people for their height and weight.  As a result of an example I used for a class, I started thinking about the relationship between weight and earnings.  The BRFSS doesn't have a measure of individual earnings, but it has a question on family income, and for people who are single (never married) and employed, it seems safe to assume that income and earnings are usually very close.  Since the BRFSS obtains very big samples, that still leaves over 20,000 cases.  I controlled for gender, height and weight.  For both height and weight, I included the original and its square and allowed both to differ by gender.  The following figures show the predicted values for a range of weights at selected heights. 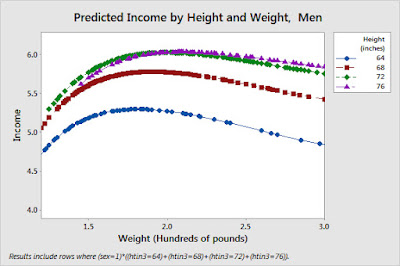 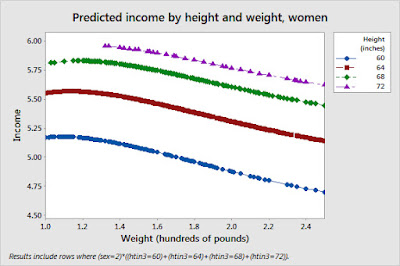 For women, being thinner goes with having a higher income.  The relationship seems to flatten out at the lowest weights, but basically if your goal is to be rich (or at least reasonably well paid), you can't be too thin.  For men, the relationship is different--the highest expected earnings are at the middle weights, and the penalty for being below the "ideal" weight is at least as large as the penalty for being above it.  For example, at 6 feet, the highest predicted earnings are at a bit over 200 pounds, and the predicted values for a man who weighs 150 and a man who weighs 295 are about the same.

Although I was primarily interested in weight, I noticed that the influence of height also differs by gender.  Women benefit from being taller through the whole range. but the predicted values for tall men (6'4") and fairly tall men (6') are almost identical.

I wouldn't put too much faith in the exact shape of the curves, since I didn't experiment much with alternative specifications, but the possibility that "underweight" men earn less is intriguing.  I put "underweight" in quotes because men who are in what is officially classified as the "normal or healthy" range earn less than men who are in the "overweight" range and sometimes even the lower reaches of "obese."
Posted by David Weakliem at 11:37 AM 1 comment:

Coulda been a contender

A few days ago, the New York Times had a story called "Boxing is a brutal, fading sport.  Could football be next?"  It pointed out that boxing used to be very popular, but said "there came a time when the fight game’s hold on the American spirit began to loosen, when it stood widely condemned as plain brutal."  As the title suggests, it went on to say that maybe the same thing was starting to happen to football.

I looked for questions about whether boxing should be banned, and found a number going back to the 1950s.  Several gave a simple choice:

Public opinion didn't turn against boxing in a straightforward sense--in fact, support for abolishing boxing was generally lower in the 1980s and 1990s.  Or looking at it another way, boxing's hold on the American spirit wasn't secure even in its glory days:  about 40% wanted it abolished.

There are no questions about whether football should be abolished, but several in the past few years have asked if the respondent would allow a son to play football:  about 70-75% say they would.  People do seem to be aware of the dangers of football:  in 2011, a survey asked "in which one of the following professional sports do you think athletes are most likely to sustain a permanent injury that will affect them after they retire?...NFL (National Football League) football, martial arts, boxing, hockey."  More chose football (49%) than boxing (36%).

The lesson is that changes in the fortunes of the sports didn't directly reflect changes in public opinion.  I think the basic reason that football flourished while boxing declined is that football developed an organization that could supply a consistent "product," and boxing never did.

[Source:  iPOLL,  Roper Center for Public Opinion Research.  The Roper Center has moved from UConn, where it had been since 1977, to Cornell University.  I'm sorry to see it go (I was interim director from 2004-6), but I'm glad that it found what promises to be a good home.]
Posted by David Weakliem at 8:15 PM No comments:

False consciousness in the donor class?

Paul Krugman recently had a column asking why Republicans claim that they will deliver faster economic growth, even though growth has actually been considerably faster under Democratic presidents since at least the 1940s.  His answer is that it's partly "epistemic closure: modern conservatives generally live in a bubble into which inconvenient facts can’t penetrate" and partly that they "need to promise economic miracles as a way to sell policies that overwhelmingly favor the donor class."  It seems to me that he's trying too hard to make a mystery out of this.  I think Republicans promise faster growth because they believe they can deliver it, and they believe they can deliver it because they have a "common sense" argument that they can:  there are tradeoffs between different goals, and if you insist on things like equality or environmental protection, you'll pay a price in economic growth.  And in my experience, most people (probably all people most of the time) base their opinions on what seems like common sense to them rather than on careful analysis of the available data.

However, his column led me to wonder if the "donor class" actually does better under the Republicans, or if a rising tide lifts all boats, so that all income groups do better under the Democrats.  I obtained data from the World Top Incomes Database on the average income (adjusted for price levels) of the bottom 90%, the 90-5 percent, the 95-99 per cent, and the top one percent.  Then I did a regression with percent change over the previous year as the dependent variable and party of the president as the independent variable.  The classification of years when party control changes is difficult:  the president is inaugurated in January, so the new party is in control for the great majority of the year, but the American economy is big and there's a lot of inertia.  So I counted those years as half one party and half the other.

The average annual change in real income under the two parties:

The numbers in the World Top Incomes Database are pre-tax incomes, so it's likely that the top 1% really has done better under Republican presidents in terms of after-tax income.
Posted by David Weakliem at 7:11 PM No comments: