In the NY Times, Ross Douthat links to some Gallup data showing a decline in support for gun control since 1990, and offers an interesting argument about the reason.  He suggests that it's one aspect of a general move towards individualism--the idea that people should be allowed do what they want as long as it doesn't directly hurt other people.  With many issues, this idea has "liberal" implications (same-sex marriage, legalization of marijuana) but with gun control it has "conservative" implications.  Before his column came out, I found another series of questions on gun control, "do you favor or oppose stricter gun control laws?"  (There were minor variations in question wording, but they seem unlikely to have made a difference).  Here is the plot of percent favor minus percent opposed: 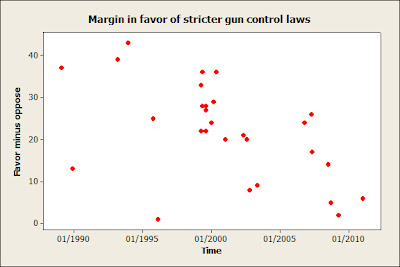 There is also some downward trend, but also a lot of short-term change (maybe in response to events in the news).  I think this volatility counts against the idea that the decline reflects a general change in values.  That kind of change is driven mainly by generational replacement, producing a gradual and steady change (which is what you see with same-sex marriage).   Also, as Douthat notes, the decline in support for gun control 1990 might also be explained as a response to declining crime rates.   If support for gun control declined in the 1970s and 1980s, when crime was steady or increasing, that would be stronger evidence that it was related to a rise of individualism.  Gallup also asked a question about handguns that goes back farther, and my impression is that opinion didn't start to show a trend until about 1990.  I may take a closer look in a future post.
Posted by David Weakliem at 2:05 PM No comments:

The other day I heard something on NPR saying that, by one measure, support for gun control had declined from over 80% (I believe they said that was in the 1980s) to less than half today.  I'd thought that it had been pretty steady over time, so I checked for surveys that asked comparable questions over a period of time.

There have been a number of questions on assault rifles, with the basic form "are you for or against a law which would make it illegal to manufacture, sell, or possess semi-automatic guns known as assault rifles?"

It looks like a substantial decline in support for a ban on assault rifles.  But the 1995 question had an introduction:   "if you would favor or oppose the following proposal which some people have made to reduce crime:  a ban on the manufacture, sale, etc."  The mention of reducing crime might have made people more inclined to say they favored it.  If you leave that question aside, there has been some decline in support for a ban, although not as dramatic.

Mitt Romney's unwillingness to release more than two years of tax returns is currently getting a lot of attention in the media.   The Romney campaign says "there is no evidence that voters care about this.  They think they know enough about Mitt Romney's finances."  Of course, this is what you'd expect the Romney campaign to say, but there are a lot of things that seem important to journalists and political insiders but not to the public (pretty much all "gaffes," for example).  I didn't expect to find many surveys asking about Romney's tax returns, although that may change soon if the issue stays in the news, so I looked for more general questions about candidates and tax returns.  To my surprise, there were only a handful.  The most interesting one is from back in 1988, asking "if it would prevent you from voting for the candidate or if it would have no effect" if a candidate "refused to release tax returns to the public."  72% said it would prevent them and 19% said it would have no effect.  They also asked about a number of other things.  The complete list:
Prevent from voting for

So there's evidence that voters care about releasing tax returns in general, although not about whether two years versus ten years makes a difference.


Posted by David Weakliem at 6:28 PM No comments:

In honor of July 4th, this post is about a survey of where America ranks of various qualities.  (July 4th was almost two weeks ago, but I blog at a leisurely pace).  The survey was sponsored by the Center for Public Leadership at Harvard University and US News.  The questions were introduced with "the UN Human Development report has ranked 32 industrial countries, including the United States, on a number of dimensions. Where do you think the United States ranks – from 1 being first to 32 being last – on each of the following?"  The items were:
Median perceived              Actual

I was unable to find the original UN report ranking 32 nations, and the Center for Public Leadership didn't report the actual rankings for R&D and gender equality, but I think the median public rankings are pretty close to the true ranking on those items (see the Human Development Report for rankings of all countries).

That raises the question of who perceives the United States as ranking higher or lower.  I looked at the effects of self-rated ideology and education.  Conservatives see the United States as ranking better on every item.  I thought that math literacy might be an exception, since conservative leaders often are critical of American education, but the association was about equally strong for all.

The effects of education were more varied:  more educated people thought we ranked worse on math scores and better on life expectancy, gender equality, and R&D expenditures.  There was no association with perceived rank on inequality.

Posted by David Weakliem at 6:15 PM No comments:

Another question from the Opinion Research Corporation:  "In normal times, do you think we can depend on competition to keep prices at fair levels, or is some sort of government control needed to keep prices fair?"

That was the last time they asked about "normal times," but they later asked:  "Do you think we can depend on competition to keep prices at fair levels this year, or is some sort of government control needed to keep prices fair?"


Between 27% and 43% of the public said that there should be price controls in "normal times," a proposition that would get almost zero support among policymakers and professional economists.  Clear majorities supported price control in 1971, and again in 1974 even though price controls had then been in effect for several years and hadn't been very effective in reducing inflation.

Of course, it's possible that there would be less support for price controls today.  However, I think these results illustrate an important point about public opinion on economic policy:  it can't really be classified as liberal or conservative.  The best term might be "dirigiste":  people think that the government should be more active in regulating "bad" things, whether they involve companies raising prices or workers going on strike.

Posted by David Weakliem at 8:31 PM No comments:

Over a period of about 40 years, the Opinion Research Corporation occasionally asked:
"In [all] industries where there is competition, do you think companies should be allowed to make all [the profit] they can, or should the government put a limit on the profits companies can make? "
The results (* indicates that the question included the words in brackets).

Support for limits on profits rose in the 1970s and early 1980s, before dropping in 1986. The most plausible explanation of the rise is that it was a reaction to the high inflation of that time.  There seems to be no real trend over the longer term--opinions in 1986 were just like opinions in 1946--but unfortunately the question hasn't been asked since then.
Posted by David Weakliem at 5:35 PM No comments: