In my last post, I showed trends in answers to four questions in the General Social Survey proposing possible explanations for why blacks have worse jobs, income, and housing than whites.  The proposed explanations were discrimination, less inborn ability, less chance at education, and lack of motivation.  I briefly mentioned the relationships of answers to these questions to opinions about what should be done, but thought it deserved more attention.

Some philosophical defenses of egalitarianism hold that whether or not there are innate differences is irrelevant.  For example, in 1929 R. H,  Tawney said the idea "that men are, on the whole, very similar in their natural endowments of character and intelligence . . . is a piece of mythology against which irresistible evidence has been accumulated by biologists and psychologists."  But he went on to say that didn't matter--the equality he valued was "not equality of capacity or attainment, but of circumstances, and institutions, and manner of life."  (Equality, pp. 34, 37).  That is, people of different natural abilities should have different jobs, but not radically different standards of living.
However, you don't hear this sort of thing much today.  For example, Charles Murray (Coming Apart, p. 298) says that the belief that people "are equal, or nearly so, in their latent abilities and characteristics" is a foundation of the welfare state.  Many of his critics seem to go even farther, saying that talk about innate differences means denying people's "right to exist."   But for the average person, it doesn't seem to matter much.

PS:  there was no evidence to support my suggestion in the previous post that people who answered "no" to all were more conservative.
Posted by David Weakliem at 10:10 PM No comments:

The decline of reasons

The General Social Survey has a series of four questions introduced by the statement, "On the average [Negroes/Blacks/African-Americans] have worse jobs, income, and housing than white people.  Do you think these differences are."  The possibilities offered are "mainly due to discrimination," "because most [N/B/A-A] have less in-born ability to learn," "because most [N/B/A-A] don't have the chance for education that it takes to rise out of poverty," and "because most [N/B/A-A] just don't have the motivation or will power to pull themselves up out of poverty."  These were separate questions, not options--respondents answered yes or no to each one.

Yes answers to the discrimination or education questions was correlated with more liberal opinions on policy (e. g., that the government should spend more on improving the conditions of blacks); a yes answer to the willpower question was correlated with more conservative opinions.  A yes answer to the in-born ability question was in the middle--it had some association with conservative opinions, but not as strong as the willpower question.  This may seem strange, but you can argue that people should not be held responsible for conditions that are not their fault.

Here are the figures for the proportion of blacks and whites saying yes to each question; I omit people of other races because the numbers were small.  (Blacks were not asked these questions in 1977). 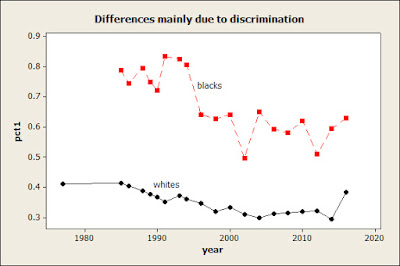 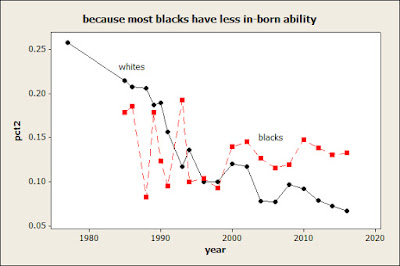 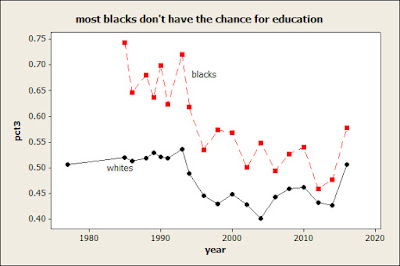 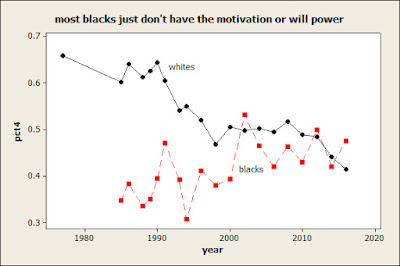 The proportion saying that discrimination was the main reason declined for both whites and blacks, but more for blacks.  There was, however, a substantial rise between 2014 and 2016 for both races.  I wonder if that resulted from the news stories and videos about police treatment of blacks in the last couple of years?

The proportion of whites who said that the differences were because blacks had less in-born ability declined substantially; the proportion of blacks increased, and has been consistently higher than the white proportion since 2000.

Finally, the proportion of whites who said that the differences were because blacks had less motivation declined, while the proportion of blacks rose.  Opinions on this question among blacks and whites are now about the same.


Posted by David Weakliem at 8:20 PM No comments:

Where the working class are

For several years, I have been saying that journalists write as if the "white working class" is found somewhere out in the Midwest.  It occurred to me that there was a way to check on my impression--search for news stories that included "white working class" and the name of a particular state.  I did that for stories in the New York Times for the last 12 months.  Many of the mentions of states are incidental--for example, this story is mostly about the views of some Democratic politicians in Ohio about how to win back the white working class, but it says "it's not enough for new national Democratic Party Chairman Tom Perez to tell voters, as he did recently in New Jersey, that Trump and Republicans don't care about them," so I count it for both Ohio and New Jersey.

Some states in the Northeast:

Pennsylvania, which could be regarded as split between the Northeast and the Midwest, has 93.  My impression is that almost all of them are about the part of the state from Allentown and Scranton on west, but I didn't check that.  Moving on to the Midwest:

The Midwestern states got substantially more mentions in conjunction with "white working class" than the Northeastern ones did.  In some cases, that might be because they were "battleground" states or unexpected wins for Trump, but Ohio was a pretty safe Republican state in this election, and West Virginia, which was a lock for Trump, got twice as many mentions as Maine, which was competitive.

I also tried three large states from various parts of the country:

Those were higher than I expected, but the Midwest is still over-represented relative to its population--the combined total for California, Texas, and Florida is below the total for Ohio and Michigan or Ohio and Wisconsin.  So my impression seems to have been correct.

Note:  I left out New York because many of the mentions were for the New York Times, and Indiana and Vermont because stories might mention Mike Pence or Bernie Sanders and include their state in describing them.

In January 1983, the Roper Organization asked "In America, each generation has tried to have a better life than their parents, with a better living standard, better homes, a better education, etc. How likely do you think it is that today's youth will have a better life than their parents--very likely, somewhat likely, somewhat unlikely, or very unlikely?"  The question wasn't asked again until 1995, but since then it has been picked up by other survey organizations and asked fairly often.  The averages, counting very likely as +2, somewhat likely as +1, somewhat unlikely as -1, and very unlikely as -2: 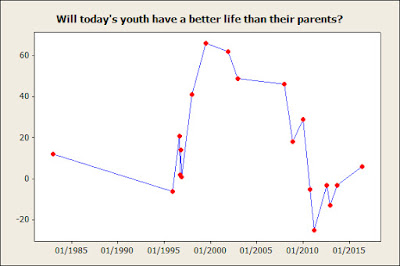 There seems to be some correlation with economic conditions.  The drop between 1983 (when employment was over 10%) and the mid 1990s is puzzling, but as I've noted in other posts, Americans seemed to be disgruntled in the mid-1990s.  The other puzzle is that it hasn't recovered much since the recession of 2008.

The original data was available for some of the surveys, so I broke it down by party identification for those.  In the 1980s and 1990s, the supporters of the different parties all had about the same expectations.  In the two surveys taken while George W. Bush was president, Republicans were more optimistic; in the surveys taken while Barack Obama was president (counting December 2008 as part of his presidency), Democrats were optimistic.  That is, expectations have become polarized by party identification.  That could be because of change in communications technology, with supporters of each party increasingly living in "bubbles."  However, I think that what has happened since 2008 suggests that something else is also at work.  Between January and December 2008, expectations dropped among Republicans and Democrats, which is to be expected given the decline in economic conditions (unemployment rose from 5% to 7.3%).  They dropped by more among Republicans, which is reasonable because their candidate had lost in the presidential election.  Between December 2008 and October 2010 they dropped sharply among Republicans and stayed about the same among Democrats.  By that point, unemployment was even higher (9.4%), although it was dropping, so either response could be seen as reasonable.  Between October 2010 and April 2011 expectations dropped sharply again among Republicans and stayed the same among Democrats.  Unemployment had fallen slightly (to 9.1%), so it's not clear why expectations should have declined.  Finally, the last survey for which a breakdown by party is available was in December 2012, when unemployment had fallen to 7.9%.  Democrats became a bit more optimistic, while Republicans remained as pessimistic as ever.  That is, during the Obama presidency, expectations kept becoming more negative among Republicans even while conditions were improving--Republicans were far more negative in December 2012 than they had been in December 2008, when there seemed to be a real possibility that we were facing another Great Depression.  That is, opinions among Democrats have pretty much followed economic conditions, while opinions among Republicans have diverged from them. 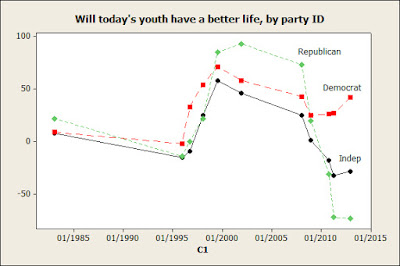 My thought is that this is connected to the rise of ideological conservatism that I discussed in my last post.  A lot of conservative intellectuals have become attracted to the idea that we are at a crossroads, with a choice between advancing towards utopia and falling into barbarism (or at least becoming like Western Europe).  That mood can trickle down to ordinary people who aren't paying that much attention to politics.  As a result, things like Obamacare and raising the debt ceiling, or whatever else was going on in Obama's first term, had as much effect on Republican views as the economic collapse of 2008.

[Data from the Roper Center for Public Opinion Research]
Posted by David Weakliem at 10:22 PM No comments:

A return to facts

[Data from the Roper Center for Public Opinion Research]
Posted by David Weakliem at 8:46 PM No comments: