The survey also contained a few basic questions on politics.  I made an index of political views from questions on approval of President Bush, party identification, and description of political views as liberal or conservative.  Controlling for age, gender, education, income, and race (black vs. all others), people who have read more of these authors were more liberal/Democratic.  It was the second strongest predictor, exceeded only by race.

I also did a regression with a separate variable for each author, which produced a significant improvement in fit.  The biggest effects (positive numbers mean a liberal/Democratic direction and negative mean a conservative/Republican direction):

That's six more or less contemporary authors plus Flaubert.  At first glance, it seems odd to have Flaubert in a group with Stephen King and Danielle Steel, but I think they have something in common--compared to most of the other authors on the list, they're less likely to be required reading in high school or introductory college English classes, so people have to make a more active choice to read them.   The relationship to political views doesn't correspond to the political views of the authors--for example, Bellow was pretty conservative by that time while Michener was an active Democrat.

I wasn't surprised to find some relationship between reading and political views, but I was surprised at how strong it was.  Among people who hadn't read Flaubert only 8% were liberal Democrats who disapproved of Bush; among people who had, 34% were.
Posted by David Weakliem at 5:56 PM 2 comments:

In 1970, Milton Friedman wrote a famous essay entitled "The Social Responsibility of Business is to Increase Its Profits."  In his view, "the key point is that . . . the manager is the agent of the individuals who own the corporation . . . and his primary responsibility is to them."  Forty years later, a survey sponsored by the Public Affairs Council asked "In your opinion, whose interests should most major companies put first? The interests of...
Their stockholders
Their top executives
Their employees
Their customers or
The communities where they are located"

The most popular choice was customers (39%), followed by employees (25%), communities (19%), stockholders (14%), with top executives bringing up the rear at 3%.  Republicans, conservatives, and supporters of the Tea Party were more likely to agree with Friedman, which isn't surprising.  (Although the liberal/conservative difference was smaller than I expected).  The pattern of demographic differences is more interesting.  There were some racial/ethnic differences in the percent choosing "stockholders," but they weren't that big:

The educational differences remained substantial after controlling for age and income.  In the discussions over the future of the Republican Party over the past year, some people have proposed "libertarian populism" as a winning strategy.  But as these figures show, the libertarian (or classical liberal) position is more popular among affluent, well-educated people.  Among people with low income or education, more than half say the primary responsibility should be to employees or the community.  And even among people earning over $150,000 a year, the combined total for employees and the community is larger than the number choosing stockholders.  The idea that the primary responsibility of business is to its employees or the community has sometimes been called "corporatist," which ironically has become a favorite term of abuse among conservative critics of the Obama administration.  But if you want to be a populist, that's the direction to go.
Posted by David Weakliem at 6:48 PM No comments:

The hope that springs eternal

Paul Krugman frequently says that conservatives live in an "information bubble," and sometimes gives the belief that Mitt Romney would win as an example: "the polls clearly pointed to an Obama win but Republicans lived in a closed information loop where such information was excluded ..."   He may be right on the general point, but I've never found the example to be convincing.  First, even though election polls have a pretty good track record, there are sometimes systematic discrepancies.  In 2012, the polls showed only a narrow lead for Obama, so it wasn't irrational to think that Mitt Romney was going to win.  Second, it seems to be a general human tendency to think that things will turn out the way you want them to turn out.

I looked for questions of the general form "Regardless of how you plan to vote, who do you expect to win the **** presidential election, ***** or ****?"  There was some variation in question wording, but it seemed to make little or no difference to the results.  In recent elections, the question has been asked pretty frequently, so I used examples from within about ten days of the election (four or five per election).  In earlier years, they were less common, so I used anything from the end of September on.  In most cases, there were still only one or two, and a few were missing entirely.  The figure shows the relationship between the proportion who expected the Democrat to win (out of the people who had an opinion) and the Democratic share of the two-party vote. 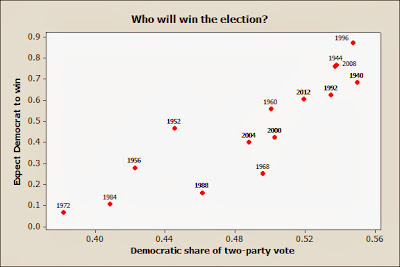 There's a strong relationship to the actual election results--for example, only 6% thought that George McGovern would win in 1972, but more than 80% expected Bill Clinton to win in 1990.  There was no systematic difference in expectations about Democrats and Republicans, but there were a few cases in which expectations were substantially different from what you would expect given the actual votes.  One was 1968, when only 25% expected Humphrey to beat Nixon, but the election was very close.  That survey was taken at the end of September.  I've heard that the election tightened up near the end, so if the question had been asked just before the election expectations might have been more evenly split.  The other elections that stand out are 1952 and 1956, which both involved Adlai Stevenson vs. Dwight Eisenhower.  In 1956, about 30% expected Stevenson to win.  Eisenhower had won pretty easily in 1952 and been a popular president, so I'm surprised that anyone except a few die-hards thought Stevenson had a chance.  For 1952, the only data available was from August, but at that point about 45% expected Stevenson to win.

My guess about the reason that 1952 and 1956 were different is that after 1948, when all the polls said that Dewey would beat Truman, people (especially Democrats) were more inclined to go with their gut.  But maybe it was something about Stevenson or the political climate of the time.  In any case, there's no sign that Republicans were particularly unrealistic in 2012.

Another interesting point is that in 1968, 6% expected George Wallace to win.  In 1992, only 2% expected Ross Perot to win, even thought Perot got a considerably higher share of the vote than Wallace did (19% vs. 13%).

Posted by David Weakliem at 8:30 PM No comments:

Should we be worried about inflation?

One part of this question is about the chances that inflation will increase.  The other part is how bad it would be if inflation increased.   There's been a lot of discussion of the first part, but not much of the second--people just seem to take it as obvious that inflation is bad.   Of course, hyperinflation can bring the economy to a standstill, but would inflation of 5% or even 10% be a serious problem? Presumably the idea is that higher inflation leads to lower economic growth, so I looked for research on that issue.  The most widely cited paper seems to be one by Robert Barro in 1995.  He found that higher inflation indeed went with lower growth.  Moreover, the relationship appeared linear--every increase in inflation would reduce the expected growth rate by about .02 percentage points.  (For example, a country that was predicted to grow by 2.1% if it had stable prices would be predicted to grow by 2% if it has 5% inflation, 1.9% if it had 10% inflation, etc.).  That is, there was no "safe" level of inflation.  But another widely cited paper published at about the same time, by Michael Sarel, came to very different conclusions: inflation didn't have any negative effects on growth until it got beyond 8%.

Oddly, there didn't seem to be much later research trying to see who was right, so I took a look myself.  Data on real GDP per capita going back to 1950 can be found in the Penn World Tables.   I got data on inflation from the Bureau of Labor Statistics.  The BLS data includes only 16 countries, but they are all industrialized economies and reasonably stable democracies, so you don't have the questions of comparability and data quality that you have when using large numbers of nations.

So inflation appears to have no association with growth until you reach about 10%, a level that the United States hasn't reached since 1981 (we haven't even passed 5% since 1991).  That suggests that we have a lot of safety room.  The relationship continues to hold if you use an average of the last three years of inflation and if you add controls for country-level fixed effects.  This obviously isn't a definitive analysis, but it's more than I've seen in any of the warnings about the dangers of inflation.

Posted by David Weakliem at 6:48 PM No comments:

Nothing to see here

A question very similar to the one I discussed in my last post--"The federal government controls too much of our daily lives"--has been asked in the United States fairly often beginning in 1987 (most often in the Pew surveys).  The figure shows average opinion with completely agree as 4, somewhat agree as 3, somewhat disagree as 2, and completely disagree as 1. 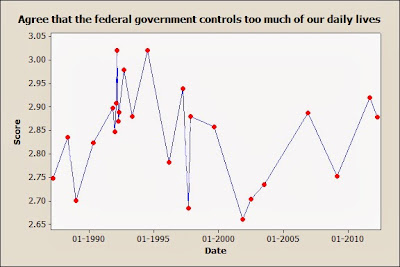 There's not much pattern.  The lowest scores occurred in Nov 2001 and July 2002, presumably as a reaction to 9-11, which was followed by a general rise in  support for the government.  There may have been more distrust in the early 1990s, which as I've mentioned before, seemed to have an anti-government mood (for no obvious reason).  However, I'm not sure that's statistically significant, and most of the ups and downs are small enough to be the result of sampling variation.  Average levels of agreement are the same regardless of the party of the President, The two most recent scores are about the same as the scores in the late 1990s, which was a period of prosperity and if not exactly good feeling (there was the attempt to impeach Bill Clinton), at least less acrimony than we have now.
Posted by David Weakliem at 8:07 PM No comments:

In 2007, the Pew Global Attitudes Project asked people for their reaction to the statement :  "The state [or government] controls too much of our daily lives."  In the United States, 28% said they completely agreed and 37% mostly agreed.  This was more agreement than in Canada (a combined total of 59% agreeing), Sweden and Spain (both 61%), but no different from Britain and France (64 and 65%), and less than Italy and Germany (73% and 74%).

In less developed countries, people are generally less likely to agree, but there is a lot of variation.  For example, in Bangladesh, 43% completely agree and 41% mostly agree, but in Peru, only 8% completely agreed and 23% mostly agreed.  There are some general patterns--for example, agreement is relatively low in East Asian countries--but also a good deal of variation among countries that seem pretty similar in other ways:  for example, Brazil (76% agree) and Argentina (40%).