David Brooks recently wrote about a paper by James Lindgren which found that people who supported economic redistribution were more racially prejudiced and less tolerant than those who opposed redistribution.  That is the data suggested that support for redistribution was driven by resentment and envy rather than altruism or sensitivity to injustice.

I took a look myself, using the same data set Lindgren did (the General Social Survey), and he's on to something.  The GSS has been used a lot, so I'm sure someone else had run the relevant statistics before, but he seems to have been the first to notice that there's a definite pattern. Here are some correlations between answers to a question on whether the government should try to equalize wealth and income and some questions about race, tolerance for unpopular points of view, and general assessments of people (are they fair, can they be trusted, would they try to help).  The positive correlations mean that people who are opposed to redistribution tend to be more tolerant and optimistic.  (The words in capitals are the names the GSS uses for the questions).

I thought of an interpretation of the pattern.  Altruists--people who care about others--will be more tolerant than selfish people.  Poor people who are altruists will tend to oppose redistribution, but affluent people who are altruists will tend to support it.  But that interpretation implies that the pattern would show up even more strongly if you divided people by income.  It doesn't--it's education that makes the difference, not income.
Posted by David Weakliem at 12:03 AM 2 comments:

Most people seem to think that income tax rates keep inching upwards.  For example, in 1997 a New York Times/CBS poll asked "By the end of Bill Clinton's term in office, do you think income taxes--the percentage of your income you pay in federal taxes--will be higher, lower, or about the same as they are today?"  52% said higher, 6% said lower, and 42% said about the same.  In 2005, they asked the same question referring to "By the end of George W. Bush's second term in office":  41% said higher, 9% lower, and 47% about the same.  In October 2008, a Gallup/USA Today poll asked "Four years from now, do you think your federal income taxes will be--a lot higher, a little higher, the same, a little lower, or a lot lower...if Barack Obama is elected president (in 2008)"  49% said higher, 29% lower, 18% about the same.  For John McCain, the numbers were 49% higher, only 15% lower, and 31% about the same.

If I'd been asked, I would have said that income tax rates had stayed about the same over the last 30 years.  Reagan lowered them, then raised them, then Clinton raised them and Bush lowered them, so on the whole not much change.  Actually, when looking at historical statistics on the budget recently I saw that in 2010 personal income tax revenues amounted to 6.2% of the GNP, the lowest level since 1949.  Of course, that's partly because of the recession--unemployed people don't have much income on which to pay taxes.  But this I estimated a trend for the "full employment" --what income tax revenues would be if unemployment were 4%. 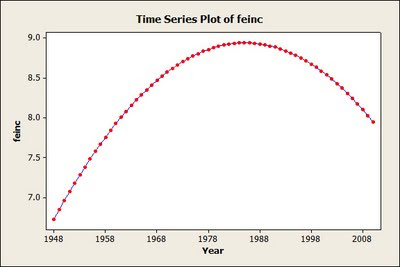 The figure indicates that income taxes have been dropping and are about where they were in the late 1950s.  Of course, the numbers in the figure are from a statistical model, but if you want raw numbers, you can compare 2010 to 1982 and 1983, when unemployment was about the same but personal income tax revenues were 9.2 and 8.4 percent.
Posted by David Weakliem at 8:16 PM No comments:

Found while looking for something else

In the current budget debate, it seems like Republicans are convinced that the public wants budget cuts and doesn't mind tax cuts for high earners.  Democrats don't seem to have the same conviction about what the public wants.  Of course, this gives Republicans an advantage in bargaining.  This observation led me to wonder if there were survey questions about what people thought that most people thought.  There are a few, which I will talk about in a later post, but while searching, I was diverted by a question in a Gallup poll from 1949:

28% said voters thought about the country as a whole, 66% said themselves, 5% didn't know, and 1% gave a qualified answer.

John Taylor, a distinguished economist at Stanford, observes that there is a strong relationship between investment and unemployment and suggests that "the anti-business sentiment coming out of Washington" has been keeping investment down.  Paul Krugman replies that investment is low simply because the market is bad--unemployed people don't buy much.  The stuff about business being spooked by what the government is doing or saying is "just politically motivated mythology."

This is an old issue, one that's been debated since at least the 1930s, so you'd think that people would have collected data.  I did a search and to my surprise found very little.  The only data I found for the United States that covered a significant period is the NFIB Optimism Index, which has been collected since the 1970s.  Changes between 1979 and 2009 can be found in this report.  It would be pretty straightforward to look at the relations among investment, the optimism index, and government policy, but I couldn't find any research that tries to do that.
Posted by David Weakliem at 11:30 PM No comments: 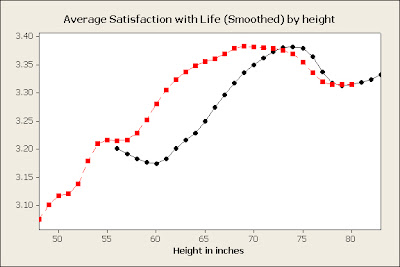 After posting the figure on height and satisfaction with life, I started wondering if the model (a cubic polynomial) might be hiding some other differences between men and women.  The figure above gives average satisfaction by height (e. g. averages for people who said that were 65, 66, 67... inches tall), smoothed in order to reduce the effect of sampling variation.  It confirms that satisfaction drops for the very tallest people, for both men and women.  The people who are happiest, on the average, are tall but not exceptionally tall.

But it also shows something that's hard to see in the polynomial estimates:  for women, there is a substantial range, from about 65 to 75 inches, in which height makes very little difference.  That is, short women are less satisfied with their lives, but there's little difference between women who are just a little taller than average and those who are a lot taller than average.  For men, there's a clearer peak at about 74 inches--that is, men who are tall are more satisfied than men who are pretty tall, who are more satisfied than men of average height.
Posted by David Weakliem at 3:57 PM No comments: