I picked up a copy of the Hartford Courant today and was reading an opinion piece by Jonah Goldberg.  Amidst a bunch of mysterious pop-culture references, a familar name jumped out:  James Stimson, a political science at UNC who has developed a measure of "policy mood":  basically, average public opinion on a liberal-conservative spectrum based on specific political issues, not self-description as liberal or conservative.  Then something surprising:  Goldberg said "In 2012, James Stimson, arguably America’s leading expert on U.S. public opinion, found that the country was more conservative than at any time since 1952."  I'm familiar with the policy mood measure, and that didn't fit with what I remembered.
It turns out Goldberg is right:  see the policy mood data here.  He's also wrong:  see the policy mood data  here.  Here are the two measures shown on one graph (higher values mean more conservative).  They track each other closely until the early 1980s, and after that point have little in common 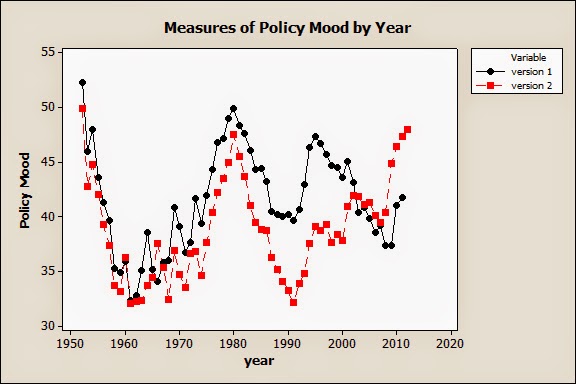 I don't know why. Neither of the data sites and none of the discussions and citations I've found mention the difference.


Posted by David Weakliem at 8:18 PM No comments:

Rudy Giuliani has gotten a lot of attention for saying "I do not believe that the President loves America."  Brendan Nyhan points out that a number of other prominent Republicans have said similar things, and proposes race as an explanation:   "people dissociate Mr. Obama and other African-Americans with American identity."  But before thinking about explanations, we should ask whether there's anything that needs to be explained.  Although Giuliani says he felt a love of country from Bill Clinton, many Republicans weren't so indulgent when he first ran for president in 1992.   To some extent, lack of patriotism is a standard Republican accusation against Democrats, just as lack of compassion is a standard Democratic accusation against Republicans.

Unfortunately there aren't many useful survey questions, but in 1988 a CBS/New York Times poll asked people if they would consider the presidential candidates very patriotic, somewhat patriotic, or not very patriotic.

During the 2008 primary season, the same question was asked about John McCain, Hilary Clinton, and Barack Obama:

After McCain and Obama had won the nominations, it was asked again:

So there is something to explain, although it's not just about Obama:  Hilary Clinton was also seen as considerably less patriotic than Dukakis had been in 1988.

[Data from the Roper Center for Public Opinion Research]
Posted by David Weakliem at 6:56 PM No comments:

Among whites, people who think that more people on welfare are black differ on many questions--I have put the option they are more likely to favor in bold:

"Would you be willing or unwilling to pay more in taxes in order to provide job training and public service jobs for people on welfare so that they can get off welfare?"

"what is more to blame if people are poor--lack of effort on their own part, or circumstances beyond their control?"

"what is more to blame if people are on welfare--lack of effort on their own part, or circumstances beyond their control?

"Do you think that most welfare recipients really want to work, or not?"

"Do you think that there are jobs available for most welfare recipients who really want to work, or not?"

"Do you favor or oppose limiting how long mothers with young children can receive welfare benefits?"

"As part of a welfare reform program, do you think the government should create work programs for people on welfare and require them to participate in the programs, or not?"

However, there were also some questions on which there was no statistically significant difference (and in most cases, not even a pattern suggesting a difference):

"Do you agree or disagree:  it is the responsibility of the government to take care of people who can't take care of themselves."

"Do you think that government spending on programs for poor children should be increased, decreased, or kept about the same?"

"Do you think that government spending on welfare should be increased, decreased, or kept about the same?"

"Do you think that most of these jobs [that welfare recipients could get] pay enough to support a family?"

"Do you think that women with young children who receive welfare should be required to work or should they stay at home and take care of their young children?"

"Do you think that unmarried mothers who are under the age of 21 and have no way of supporting their children should or should not be able to receive welfare?"

[Data from the Roper Center for Public Opinion Research]
Posted by David Weakliem at 6:35 PM No comments:

A few weeks ago, Amitai Etzioni had an article entitled "The Left's Unpopular Populism."  It was mostly just a collection of "New Democrat" (new as of circa 1985) bromides, but one of his remarks caught my eye "the public views [the poor] as including mainly minorities."  That's true, or at least probably true:  a Los Angeles Times survey from 1985 asked people what percentage of poor people were black:  the median was about 40%.  A number of surveys between 1982 and 2000 asked "Of all the people who are poor in this country, are more of them black or are more of them white?"  In the latest one, 42% said more are black, 18% said more are white, 21% said about equal, and 19% didn't know.  In fact, only about 23% of the poor are black, 42% are non-Hispanic whites, 28% are Hispanic, and 8% are other races.

If you take the figures at face value and do the calculations, it turns out that people generally underestimate the association between race and poverty.  I wouldn't take the exact numbers that seriously,  but I think it is fair to say that, on the average, people have a pretty accurate view of the relationship:  they realize that the poverty rate is higher among blacks, but don't imagine that poverty is just a black problem.

The natural follow-up question is whether it matters:  from the context, it's clear that Etzioni is suggesting that whites who think that more of the poor are black are less likely to support anti-poverty programs.  My next post will look at whether that is the case.

[Data from the Roper Center for Public Opinion Research]
Posted by David Weakliem at 8:21 PM No comments:

Nicholas Kristof followed up the column discussed in my last post with another called "How do we increase empathy," which offered a smorgasbord of research findings and speculations about factors affecting empathy.  One was false (the claim that rich people give less to charity), but the others ranged from plausible to very likely.  However, that leaves the question of how closely empathy is related to political and social opinions like the "poor people today have it easy" versus "poor people have hard lives" item.

1.  He cites evidence suggesting that affluence makes people less empathetic.  So if opinions about the poor are largely a matter of empathy, they should either become steadily less favorable as income increases, or drop off sharply at high incomes.  Neither of these is the case:  as discussed in my last post, opinions among affluent people are not noticeably different from opinions among middle-income people.

2.  He cites Dacher Keltner (Berkeley) saying that "prayer, meditation, yoga" will boost empathy.  So it seems clear that people who attend religious services more frequently will be more empathetic.  Do they have more favorable views of the poor?  No: they are substantially more likely to choose "poor people today have it easy."

3.  He cites Steven Pinker (Harvard) as saying that "cuteness: paedomorphic features such as large eyes, a large head, and a small lower face,” is an important factor.  So do people have more favorable views of government programs to help children than of programs to help old people?  No:  Social Security and Medicare are very popular, while Aid to Familes with Dependent Children was unpopular enough to be abolished by the 1996 welfare reform.

Of course, I think empathy is a good thing.  But how nice people are is only a minor influence on their political views.
Posted by David Weakliem at 9:02 PM No comments: