A working-class voter is something to be

There has been a lot of talk about "white working-class voters" in this election season.  I did a Google News search for that phrase and found 623 mentions, compared to 7 for "white middle class voters."  That raises the question of why the candidates should be more interested in one type of voter rather than another--a vote is a vote.  One possible reason is the size of the group--people used to talk a lot about the "farm vote," but that's faded as the number of farmers has declined.  There are a lot white working-class people, but also a lot of white middle-class people, so that doesn't explain why the working class is getting all the attention now.  Another possibility is the possibility of changing votes--a group that can be persuaded will get attention, while one that is pretty much fixed can be written off (or taken for granted).  That raises the question of whether there are bigger "swings" among working-class voters.  If so, then the focus on the (white) working class would make sense.

Before trying to answer,  I should note that discussions in the media usually define "class" by income or education.  My impression is that education is the more common standard.  Sociologists normally define "class" by some combination of occupation and employment status, but most opinion polls stopped asking about occupation in the 1970s.  Back then, a lot of people thought that class didn't matter any more, or that the working class was disappearing.

The American National Election Studies go back to 1952 and contain measures of income, occupation, and education.  For income and occupation, there's no evidence that any group varies more than another, but for education there is:  the "swing" among people without a high school degree is about 50% larger than the "swing" among people with a college degree.  For example, say that the Democrats gain 4% vote share among college graduates than they did in the previous election--then they will probably gain about 6% among people without a college degree.  (And about 5% among high school graduates).  Candidates like Barry Goldwater and George McGovern did poorly among college graduates, but very poorly among less educated voters.

This pattern could be explained by saying that college graduates are more likely to have a strong ideological position which will keep them voting Democratic or Republican, while less educated voters are more likely to be influenced by everything else that's going on at the time. "Everything else" covers a lot of ground, but I looked at one thing that's easy to measure:  incumbency.  Being an incumbent president seems to help among all groups, but has a bigger impact among less educated voters.  That also seems reasonable, if less educated voters tend to be less politically engaged and less ideological.  This is based on a small sample (14 elections), but if the pattern holds, Romney's efforts to win over "working class" (less educated) voters won't pay off.
Posted by David Weakliem at 8:39 PM 2 comments:

In my last post, I found no relation between spending growth (2007-9) and economic growth (2009-11) using data from the International Monetary Fund.  I tried the same thing with data from the Organisation for Economic Cooperation and Development. More precisely, I looked at the relation between "general government final consumption expenditure" (P3S13) and "gross domestic product, expenditure approach" (B1_GE).   "Final consumption expenditure" is government spending on goods and services; it does not include transfers of money (like social security payments).  In principle, this kind of spending should be more relevant to stimulus, since individuals who receive transfers might save them rather than spend them. 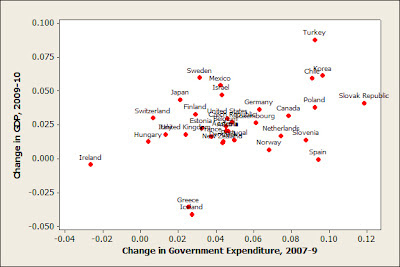 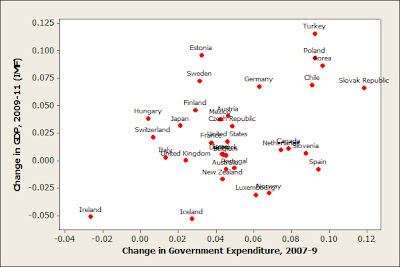 Posted by David Weakliem at 11:00 PM No comments:

Last week, Arthur Laffer published a piece in the Wall Street Journal in which he presented data purporting to show that among industrialized nations, "those that stimulated the most from 2007-2009 saw the least growth in subsequent GDP rates."  Some critics (follow links from Paul Krugman) pointed out that the things he measured didn't make sense:  most obviously, the growth data covered 2006-9, which isn't "subsequent" to 2007-9.  But that led me to wonder what you would see if you did a straightforward comparison of change in government spending and change in GDP.   I looked at three periods:  2005-7, 2007-9, and 2009-11, which roughly you could call pre-crisis, crisis, and recovery (such as it is).   Here is the relationship in graphical form: 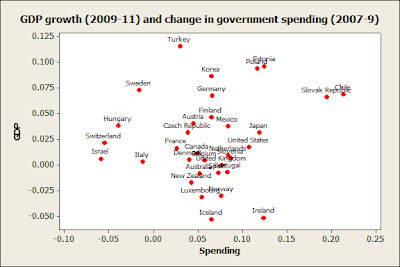 It turns out that spending in 2009-11 is related to GDP in 2007-9--the higher the GDP growth (or smaller the losses), the higher the subsequent spending growth.  In other words, countries that had suffered the most in 2007-9 tended to subsequently follow "austerity" policies.

An interesting point is that some of the countries that are generally regarded as examples of austerity had substantial spending growth in 2007-9, 2009-11, or both. For example, these numbers show Ireland and Estonia as having tried stimulus in 2007-9.  Laffer used IMF data, and I did too.  I don't know is the mismatch reflects a problem in the IMF data, or in what "everyone knows," or some technical issue in the definition of government spending.


Posted by David Weakliem at 7:05 PM No comments:

Liberals and Conservatives at Thanksgiving

There is a lot of discussion of psychological and/or lifestyle differences between liberals and conservatives.  The differences aren't all that large, when you look at them closely--see this example--but there are some, and they are fun to think about.

An October 2010 survey conducted by CBS News for Vanity Fair and 60 Minutes contained the following question:  "Besides turkey and football, Thanksgiving isn't Thanksgiving without which ONE of the following:  a good nap, a good family argument, a travel delay, a stiff drink, or indigestion."  The results, by self-described political views:

One interpretation is that conservatives are more likely to be placid people with good digestion, while liberals are more likely to get stressed.  Or maybe conservatives don't like to be negative about tradition.  A family argument, travel delay, stiff drink, or indigestion are all somewhat cynical responses (at least to me, a "stiff drink" suggests a drink taken to relieve stress, not for pure enjoyment),  so that would leave people who see no downside to Thanksgiving with a nap or nothing.
Posted by David Weakliem at 3:45 PM No comments: