In a previous post, I considered the idea that watching Fox News reduces knowledge. I will now be fair and balanced by considering the possibility that attending an elite university reduces knowledge. In 2005 the Intercollegiate Studies Institute conducted a survey of “civic literacy” among freshman and seniors at 50 colleges and universities. The questions were mostly about American history and institutions: a complete list can be found at the ISI site. Seniors got an average of 54% correct, which the ISI presented as a “failing grade.” Of course, having 60% as the minimum passing grade is just an arbitrary convention, so whether 54% is actually a good, bad, or mediocre score is a matter for individual judgment. But they also found an interesting pattern: gains from freshman to senior year were usually smaller at more prestigious universities.
Here are the averages for the Ivy League and four groups of universities based on the US News rankings: the top 50 national universities, the next 50 national universities, the top 51 liberal arts colleges, and all others. (All Ivy League universities are in the top 50 of the US News rankings—Rhodes College is ranked 51 among liberal arts college).
N Freshman Seniors  Gain
Ivy League           6   64.0    63.9   -0.1
Top 50 universities 15   58.8    60.5    1.7
51-100 universities  6   49.1    52.3    3.2
Top 51 colleges      4   57.1    62.8    5.7
Others              25   42.9    48.2    5.3
The gains in the top 100 universities were smaller than the "others," and in the Ivy League, seniors scored slightly worse than freshmen:  in the ISI's interpretation, the Ivies (plus Duke and Berkeley) “reduced civic knowledge.”  The problem with that interpretation is that there are two things at work: learning and forgetting. Students at more selective institutions start out knowing more, so they have more to forget. I estimated a regression predicting senior from freshman year scores:
S=12.6+0.83F
For example, freshman at the University of Southern Maine had an average score of 37.5, which gives a predicted senior score of 43.6, for an expected gain of 6.1. Freshmen at Brown had an average score of 63.4, which gives a predicted senior score of 65, an expected gain of only 1.6. The top and bottom performers relative to expectations:
Concordia College    +4.4
Harvard University   +4.4
Rhodes College       +4.2
Smith College        +4.0
Murray State         +3.6
St. Thomas College   -4.7
Rutgers              -4.7
Cornell              -6.8
Oakwood College      -7.0
St. John's           -7.2
The scores are influenced by sampling error (the report says that 14,000 students were surveyed, which averages out to 140 per class at each institution), but probably there are some real differences in the rate of learning (or forgetting) at different colleges.
Posted by David Weakliem at 9:40 PM No comments:

Support for residstribution: to the poor

In October, I had a post on the claim that support for redistribution has "plummeted" in the current recession.   It turns out to be either false or misleading, depending on how you look at it.  The important thing was Obama's taking office:  support for redistribution, as measured by this question, is consistently higher when a Republican is in office.  I interpret that as people make an implicit comparison--should we do more or less than we are doing now?  The rate of unemployment seemed to have no effect on opinions, and the shift from 2008 to 2010 was not unusually large given the change of presidents.

That question involved the desirability of reducing the differences between the rich and the poor.  There are two ways to do that:  giving to the poor and taking from the rich.  They're not the same:  we could take from the middle class and give to the poor, or take from the rich and give to the middle class.  Economic conditions won't necessarily have the same effect on opinions about these two kinds of redistribution.  So I looked for a question that focused on the poor, and found one that asked people to choose between two statements:

This has been asked pretty frequently since 1994, first by Times-Mirror and later by the Pew Research Center.  The last time (Feb 2011), 41% said that poor people had it easy, and 47% said they had hard lives.  To simplify, I combine the two figures by computing percent "easy" minus percent "hard":  in this case, -6.  Larger positive numbers indicate more conservative opinions.  The changes since 1994: 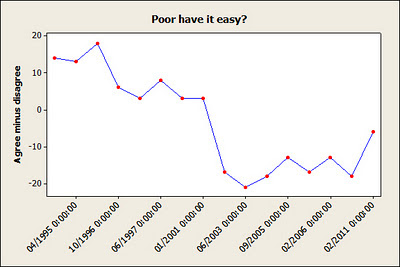 Opinions were most conservative in the 1990s, and have been more liberal since 2000.  I tried a regression equation predicting average opinions from the party of the president, the unemployment rate, and whether the survey was before or after the enactment of welfare reform in August 1996.  As with redistribution in general, opinions were more conservative under Democrats.  They became more liberal after welfare reform.  I interpret these differences as people responding to changes in the way things are, or the way they think things are.  The unemployment rate also makes a difference:  opinions become more liberal when unemployment increases.  So hard times don't make people turn against the poor:  they make them more sympathetic.

I'll try to find a question that focuses on views of the rich--if I find one that's been repeated often enough to make a comparison, I'll write about it in a future post.
Posted by David Weakliem at 6:04 PM No comments:

Continuing my exploration, I found a 1958 Gallup Poll that asked "Are people who are intellectual more likely to be Democrats or Republicans?"  The most popular answer was "no opinion," at 39%, followed by "Neither," at 27%.  Only 15% said Democrats, and 19% said Republicans.  This question was asked after the Democrats had nominated Adlai Stevenson, who had a reputation as an intellectual, for president in both 1952 and 1956.  Apparently the identification of intellectuals with Democrats hadn't caught on in the general public.

The survey also asked "If you were going to a meeting of the garden committee of the Women's Club, would you find more Republicans or Democrats there?"  Again, the most popular answer was "no opinion" (50%).  24% said Republicans, 12% said Democrats, and 13% said "neither."  People had a stronger impression in this case, but it still wasn't very strong.

It would be interesting to ask similar questions today.  People who are interested in politics are constantly offering generalizations (or stereotypes) about the tastes, lifestyles, and occupations of Democrats and Republicans, but it's hard to say how much of this has sunk in with the average person.
Posted by David Weakliem at 6:56 PM No comments:

We need a leader, not a reader

A few weeks ago, Herman Cain got some attention when he said that "we need a leader, not a reader."  He's left the presidential race, but he was connecting to an image which I talked about in my November 24 post:   Democrats are intellectuals and Republicans go with their gut instincts.  People from both parties seem willing to embrace this image, although they put a different spin on it.  Of course, there are some Republicans who present themselves as readers (or even acknowledge having been a college professor), but it's a pretty clear tendency.  My question is how far back it goes.  You could trace it back to the 1950s (the "egghead" Adlai Stevenson)  or farther (FDR's "brains trust").  But my guess is that it started with Ronald Reagan's presidency--not Reagan himself, but the way that people reacted to him.

A 1978 Los Angeles Times survey provides a good opportunity to look at this issue.  The survey asked people which qualities were most important "when you think about who should be president."  One of the qualities on the list was "intelligent."  The percentages choosing each option (they add to more than 100% because people could choose up to two):

A recent survey of New Jersey residents found that people who watched Fox News were less likely to know the outcomes of the recent uprisings in Egypt and Syria--not just less than people who got their news from other sources, but less than people who didn't follow the news at all.  Is this part of a general pattern?  I found a Pew survey from 2010 which had several questions about current affairs:  which party had a majority in the House of Representatives, which position Eric Holder had, which company Steve Jobs headed, and which country had recently had a volcanic eruption that disrupted air travel.  It also had questions about how frequently people watched or listened to various programs.  I computed scores of how often people followed liberal (Keith Olbermann, Chris Matthews, Jon Stewart, Stephen Colbert, and Rachel Maddow) or conservative (Sean Hannity, Bill O'Reilly, Rush Limbaugh, and Glenn Beck) programs.

Watching both kinds of programs was associated with greater knowledge (even controlling for education).  The association with conservative programs was actually slightly bigger, although the difference was not statistically significant.  And both had stronger associations with knowledge than reading newspapers and news magazines.  (I say associations rather than effects, since there's no way to know how much of the information people got from the programs).  So apparently Fox News doesn't always make people less informed.  On the other hand, the comparison suggests that there was something wrong with their coverage of the Middle East uprisings--their audience is not just generally ignorant of basic political facts.
Posted by David Weakliem at 6:10 PM No comments: