There used to be a question

Since 1972, the General Social Survey has asked "Generally speaking, would you say that most people can be trusted or that you can't be too careful in dealing with people?"  The question has been widely used in research, especially after the publication Robert Putnam's Bowling Alone, and it's been picked up by other survey organizations.  Since 2010, it's been asked in 27 different national surveys.

There's another question on trust that's not nearly as well known.  Until recently, I either didn't know about it or had forgotten about it.  It is "Do you think most people can be trusted?"  It was first asked in 1942, and then asked off and on until 1964.  After that it has been asked only once, when the GSS included it as an alternate form of its usual trust question.  The percentages answering "yes": 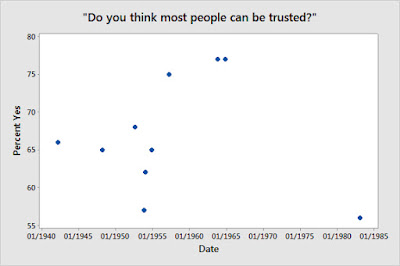 The lowest level of agreement was in 1983 (56%), but it was almost as low in November 1953 (57%).   The samples were not all that large, so you could probably make a case that the apparent differences between surveys in the early 1950s were mostly (or maybe all) sampling error.  For the same reason, the series doesn't tell us much about long-term change, since there's only one post-1960s observation (I'm not certain of sample size, but I think about 800).

There's one thing that would let us say more about long-term change, which would be if someone would ask the question today.  I'm surprised that hasn't been done.

[Data from the Roper Center for Public Opinion Research]
Posted by David Weakliem at 10:39 AM No comments:

This post was inspired by a story about the scarcity of Republicans among prominent rock musicians.   However, it;s not about Trump, but about an idea in the sociology of culture:  that more educated people tend to be "omnivores," who like all genres, rather than liking just a few things.  Of course, this doesn't mean that more educated people like every artist better, but that they like "quality" artists from all genres.  I recently wrote about a 2009 Pew survey that asked people how well they liked various popular musicians.  My impression is that all of the musicians are pretty well regarded by critics, so the "omnivore" idea suggests that education should have a positive correlation with feelings about each one.  The correlations, ranging from highest to lowest:

Two factors that might affect the correlations are when the musician was most popular, since education might increase the chance of being familiar with the older ones, and whether the musician was a tabloid celebrity, which might make educated people regard them less favorably (even though the question asked about the music, it's hard not to think about the general image).  I did a regression with my ratings of when they had their musical peaks and whether they were a tabloid figure, and found some support for both ideas.  But there's still significant variation left unexplained.  The fact that education has a negative correlation with ratings of Nirvana seems particularly interesting, since although they sold a lot of records, they made a point of being outside the mainstream and not being focused on popular success, qualities that would be expected to increase their relative appeal to educated people.

[Data from the Roper Center for Public Opinion Research]
Posted by David Weakliem at 11:27 AM No comments:

The Washington Post has compiled a database of fatal shootings by police in 2015 and 2016.  Breaking it down by state seems like an obvious thing to do, but I haven't seen anyone do it, so here are the rates (per 100,000) by state.

The general pattern is clear: fatal shootings by police are most common in the West and least common in the Northeast.  The South may be a little higher than average, but doesn't stand out:  southern states range from 10th (Louisiana) to 35th (Virginia).  Of course, there are racial and ethnic differences:  27% of those killed were black and 18% were Hispanic.  But controlling for population composition would make the West stand out even more, since the black population is relatively small in those states.
Posted by David Weakliem at 3:02 PM No comments:

I have seen several articles saying that Donald Trump is "to the left" of Hillary Clinton on trade (e. g., this one by Fareed Zakaria).  The idea is that support for free trade is the conservative position, and that protectionism is the liberal (or leftist) position.  This idea seems hard to square with the history of trade agreements.  For example, NAFTA was negotiated mainly by the George H W Bush administration, then passed with strong support from the Clinton administration.  It was not a party-line vote:  in the Senate, Republicans voted for it by 34-10, Democrats against by 27-28.  Supporters included Ted Kennedy and Phil Gramm; opponents included Paul Wellstone and Strom Thurmond.

But that's about political elites--what about the general public?  In 2009, the Pew Research Center asked "In general, do you think that free trade agreements like NAFTA, and the policies of the World Trade Organization, have been a good thing or a bad thing for the United States?"  Among people who said they were conservative or very conservative, 38% said "good thing" and 43% said "bad thing"; among those who said they were liberal or very liberal, 49% said good and 31% said bad (the rest weren't sure).  Democrats were more favorable (44% good, 33% bad) than Republicans (39% good, 40% bad).

Does the conventional wisdom have it backwards?  Pew also asked the question in 2008.  At that time, Republicans and conservatives were more favorable.  For example, 41% of Republicans said they were a good thing (44% bad thing), compared to only 30% of Democrats (55% bad thing).  (Overall support for "good thing" was considerably lower in 2008 than in 2009--I'm not sure why).

There were some consistent patterns--people with more education were somewhat more favorable at both times, as were people in the highest income category (over $150,000).  But whether support for free trade was a "liberal" or "conservative" position seems to depend on the party of the president.  My interpretation is that most ordinary people, even well-informed people, don't have a very definite position--almost everyone is in favor of "free trade" as long as it's "fair trade," and almost no one knows enough about the details of particular agreements to be able to say if they are "fair trade."  In recent history, presidents have consistently been in favor of free trade agreements, so the position gets associated with its most visible supporter--the incumbent president.

[Data from the Roper Center for Public Opinion Research]
Posted by David Weakliem at 5:12 AM No comments: