You started it, part 2

Here are a few more questions on which it's possible to see if there's been a growth in extreme opinions.  Gallup asked " In your opinion, is the death penalty imposed too often, about the right amount, or not often enough?" a number of times between 2001 and 2018.  The results, as summarized on the Gallup website: 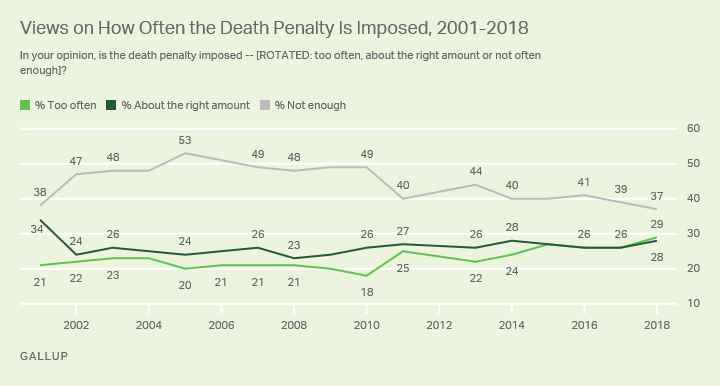 That looks like just a slight move against the death penalty, not a move towards the extremes.  Gallup does not give a breakdown by party.

Democrats have moved in favor of immigration--on the average, they are somewhat in favor of increased immigration (zero means "remain the same"), while Republicans haven't changed much.

Now the standard deviation of opinions:

Basically a movement towards regarding climate change as a serious problem.  The standard deviation:

So putting the results from this post and the last post together, polarization increased on two out of the five issues, didn't decline for any of them, and stayed about the same for three.  In one of the cases where polarization has increased (abortion), it's roughly symmetrical--both Democrats and Republicans have moved towards extreme positions.  It's hard to say for climate change, since we don't have a breakdown by party and there's a strong general trend which can plausibly be attributed to new information (average temperatures have continued to increase).  Overall, there's no evidence for the general claim that Democrats have moved towards extreme positions more than Republicans.

Posted by David Weakliem at 8:09 PM No comments:

Kevin Drum has attracted a lot of attention with an argument that "It is not conservatives who have turned American politics into a culture war battle. It is liberals."   He starts out by making a valid point--over the past couple of decades "Democrats have moved significantly to the left on most hot button social issues while Republicans have moved only slightly right."  I think he's correct on the leftward movement, but that wasn't what made American politics more polarized.  First, there's been a leftward movement on "social issues" for a long time, at least as long as surveys have been around, but polarization didn't start growing until much later.  Second, contemporary polarization isn't just (or even mainly) about "culture war" issues.  As I've observed before, during the Obama years the most polarizing issue was probably the Affordable Care Act, and several "culture war" issues faded (notably same sex marriage).  In fact, you could argue that the biggest source of polarization isn't any kind of policy issue, but a sense that the other side isn't playing fair--Democrats bring up Republican treatment of Merrick Garland, Republicans reply by talking about Democratic treatment of Brett Kavanaugh, and pretty soon we're back to arguing about whether Robert Bork was treated unfairly.   When people say that the Republicans are responsible for the growth of polarization, they usually mean that Republicans have been more aggressive about playing  "constitutional hardball".  Since this question involves the behavior of political elites, data on opinions in the general public can't shed much light on it.

But Drum does bring up an interesting question about the public--has there been a movement towards extreme positions?  His primary data source is a series of Pew surveys which used ten questions to make an index of liberalism/conservatism.  This shows a substantial growth in the numbers on the extreme left, a slight growth on the extreme right, and a decline in the number of moderates.  But the questions in the index all just give two options--e. g. "homosexuality should be accepted by society" or "homosexuality should be discouraged by society."  So an "extreme" score just means taking liberal or conservative positions on every issue.  So public opinion has polarized in that sense, but it doesn't mean that there's been a growth of extreme positions on any particular issue.  In order to see if that's happened, you need survey questions (or series of questions) giving three or more options, which are relatively uncommon.*  Drum presents data on some specific issues, but only one of them gives more than two options--on this, both Democrats and Republicans have shifted towards the extreme positions.  I looked and found a few others.

The GSS has a series of questions about whether abortion should be legal in various circumstances.  Here are the figures for the percent of Republicans who say that it should not be legal when the pregnancy is due to rape or when the woman's health would be endangered without one.

Those who say abortion should be legal "if the woman wants it for any reason."

The number of Democrats who take this position has increased.  I also show Republicans because I was surprised to see that even today about 35% of them say that a woman should be able to get a legal abortion for any reason.  Is that because there's still substantial support for legal abortion among rank-and-file Republicans, or maybe because some people misunderstood the question as essentially asking whether abortion should ever be allowed.

Another issue on which it's possible to identify extreme positions is gun control.  Between 1993 and 2013, the following question was asked a number of times:  "Which of the following statements comes closest to your view?...There should be no restrictions on owning guns. There should be some restrictions on owning guns. All guns should be illegal for everyone except police and authorized personnel."  The overall results:

I have other things to do, so I'll break here and continue the discussion in my next post.

*Questions which give a range going from "strongly agree" to "strongly disagree" are pretty common, but strong agreement or disagreement doesn't necessarily mean taking an extreme position.  For example, someone might strongly favor an increase in the minimum wage, but think that it should only be a small one.

Posted by David Weakliem at 3:17 PM No comments: