A comment on my previous post asked about the percent of people rating the parties at 100.  Here is the figure: 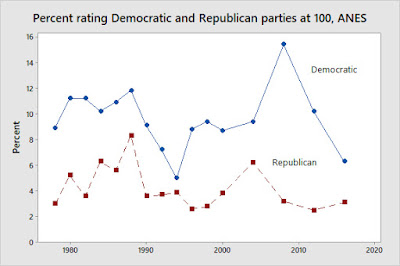 There is no clear trend for either.  Although it may not be evident from the figure, there is a positive correlation (about 0.25) between the percent rating each party at 100.  If you add them together to get an index of positive feelings about the parties, you get: 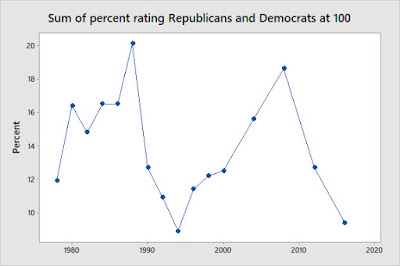 This tracks general confidence in government reasonably well.  It rose in the 1980s, then declined until 1994, then rose into the early 21st century, and then declined.  It was relatively high in 2008, presumably because Obama's nomination increased good feelings about the Democrats.

If you calculate the difference between percent rating the parties at 100 and 0, you get: 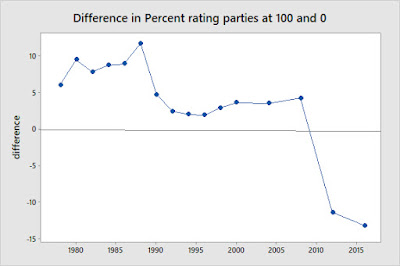 So the kind of partisan polarization that has grown isn't a matter of enthusiastic support for one's own party, but dislike or fear of the other party.

Notes:
1.  For this post and the previous post, I used the online data analysis system SDA, which lets anyone do basic analysis of the GSS and ANES.  I have a link to it in the data sources section.
2.  In 2012, Shanto Iyengar, Gaurav Sood, Yphtach Lelkes  published an article entitled "Affect, Not Ideology: A Social Identity Perspective on Polarization," which argued that contemporary partisan polarization was based primarily on feelings of dislike rather than ideology.  I thought it was pretty convincing when I first read it and this analysis has made me more convinced.
Posted by David Weakliem at 8:08 PM 1 comment:

We have met the enemy and they are you

Since 1978, the American National Election Studies has asked people to rate the Democratic and Republican parties on a scale of 0-100 ("When I read the name of a group, we'd like you to rate it with what we call a feeling thermometer.  Ratings between 50 degrees-100 degrees mean that you feel favorably and warm toward the group; ratings between 0 and 50 degrees mean that you don't feel favorably towards the group and that you don't care too much for that group.  If you don't feel particularly warm or cold toward a group you would rate them at 50 degrees").  Here is a figure showing the percentage who give each party the lowest possible rating: 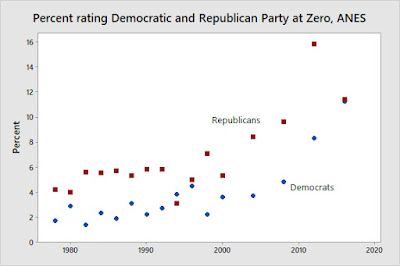 It has risen for both parties.  For example, in 1979, 1.7% of people rated the Democrats at zero and 4.2% rated the Republicans at zero; in 2016 the corresponding figures were 11.2% and 11.4%.  I also calculated the individual-level correlation between ratings of the Democratic and Republican parties--that is, the extent to which people who felt favorably towards one party felt unfavorably towards the other. 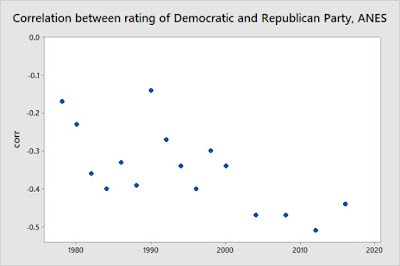 The correlations are negative, so the downward slope means that the relationship is getting stronger.

You can combine the three measures (with a principal components analysis) to get a general measure of partisan polarization. 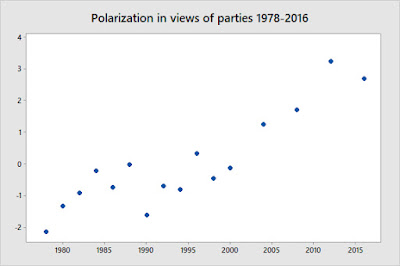 There is an upward trend, and it seems to have become stronger in the 21st century.  An interesting thing is that it doesn't track trust in government (discussed in this post) all that closely.  However, confidence in many institutions has followed a general downward trend (this post).   Of course, a lot of things have followed a trend since the 1970s, but it seems plausible in principle that polarization could cause or reflect declining confidence in institutions.

What if he couldn't?

About a week ago, Richard Kahlenberg had a piece in the New York Times in which he held up Robert Kennedy as a model of "inclusive populism."  He concluded by saying "If Robert Kennedy, the civil rights champion, could attract Wallace voters at a time of national chaos, surely the right progressive candidate with the right message could bring a significant portion of the Obama-Trump voters back home."  I had a recent post where I talked about the idea that Kennedy had a special appeal to Wallace's supporters, but in looking back at it I realized I downplayed the basic point.  This table shows it:

What if we set the South aside?

Once again, Wallace's support was just about equal in all of the hypothetical races.

So there's no evidence that Kennedy actually could attract Wallace supporters any more than Humphrey or even Eugene McCarthy could.  What did seem to matter was the Republican candidate.  In this survey, when they asked about hypothetical races involving Nelson Rockefeller, Wallace consistently did less well than in races involving Nixon.  In a survey taken a couple of weeks before, Wallace consistently did better in contests involving Rockefeller than in those involving Nixon.  I have no idea why there would be a change involving Nixon and Rockefeller in those few weeks, but the pattern suggests that Wallace supporters had become disenchanted with the Democrats, and the only question was whether they would vote for the Republican or for Wallace.


[Data from the Roper Center for Public Opinion Research]
Posted by David Weakliem at 11:53 AM No comments: 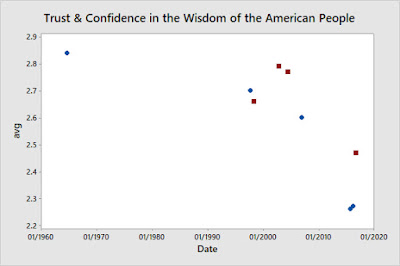 Confidence in the wisdom of the people was only slightly lower through 2006 than it had been in the 1964, but fell sharply between 2006 and 2015.  This pattern is in contrast with confidence in most institutions, which has declined pretty steadily since the 1970s, as discussed in this post (maybe with a bigger drop from the 1960s to the 1970s, as discussed in this one).  It would be tempting to say the decline was a response to the rise of Trump, but the average in a survey from September 2015, when the campaign for the Republican nomination was just getting started, and March 2016, when he was moving toward the nomination, were almost exactly the same.  So in terms of this question, he seems to have been a symptom more than a cause.

[Date from the Roper Center for Public Opinion Research]
Posted by David Weakliem at 10:04 PM No comments:

Everyone is right, sort of

In the last couple of months, Donald Trump has been boasting that "Black Unemployment has just been reported to be at the LOWEST RATE EVER RECORDED!"  At the same time, a report from the Economic Policy Institute says that black unemployment is higher than it was fifty years ago.  The figures for black unemployment, which I got via FRED, start in January 1972.  The 6.8% in December 2017 is indeed the lowest since those records began (the previous low was 7.0% in April 2000). 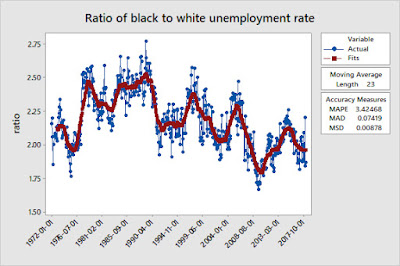 The ratio bounces around from one month to the next, presumably mostly because of sampling error, so I also show a 23-month moving average in red (chosen because it seemed to give a reasonable balance between simplicity and detail).  It seems like the ratio increased somewhat through the late 1980s and then fell, leaving it just slightly lower at the end than the beginning.  Things are a bit more complicated than that, because the ratio tends to be higher when general unemployment is low, as it is now--if you adjust for that, there is more of a downward trend in the ratio.  Still, the trend is not as large as I would have expected given the narrowing of racial differences in education.

Posted by David Weakliem at 8:37 PM No comments:

Protestant, Catholic, Jew .... and beyond?

Since the 1930s, the Gallup Poll has asked questions of the form "IF YOUR PARTY NOMINATED A GENERALLY WELL-QUALIFIED MAN FOR PRESIDENT AND HE HAPPENED TO BE _____, WOULD YOU VOTE FOR HIM?"  (Later they changed it to "person" and "that person.")  The figure shows the percent who said they would vote for a Catholic and a Jew: 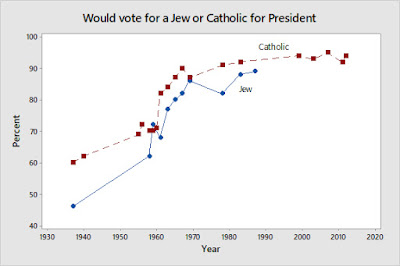 Starting in the late 1990s, they have asked about "a generally well-qualified person who happened to be Jewish"--over 90% have said that they would.  In the late 1950s, the percent saying that they would vote for a Catholic was only a little higher than the percent saying they would vote for a Jew.  Since Catholics were about 25% of the population and Jews were about 3%, that suggests that among Protestants, willingness to vote for a Catholic was lower than willingness to vote for a Jew.

In April 1960, the Gallup poll had a survey asking about hypothetical contests for President, including Kennedy vs. Nixon.  In that match, 46% said they would vote for Kennedy and 44% said Nixon.  Then they asked "As you may know, Kennedy is a Catholic in his religion.  Supposing Kennedy were NOT a Catholic—which man would you like to see win—Nixon or Kennedy?"  51% said Kennedy and 40% said Nixon.  In October 1960, they asked "AS YOU KNOW, SENATOR KENNEDY IS A CATHOLIC. HAS THIS FACT MADE YOU MORE IN FAVOR OF HIM, LESS IN FAVOR OF HIM, OR HASN'T IT MADE ANY DIFFERENCE AT ALL? (Oct 1960)"  5% said more in favor and 19% said less in favor.  That is, Catholicism made a difference to voters in 1960, and it didn't take subtle techniques to detect it.

Starting in the late 1950s, Gallup also asked about voting for an atheist: 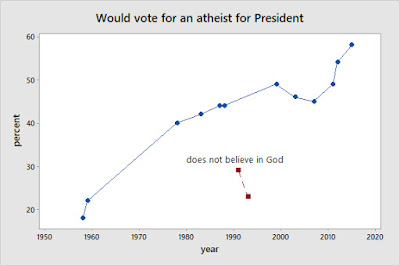 Willingness has grown, and it's now a little below willingness to vote for a Catholic or a Jew in the late 1950s.  I also show two from Time/CNN/Yankelovich surveys in the 1990s, which asked "Would you vote for a candidate for President who did not believe in God?" Those showed much lower support, although by a dictionary definition "did not believe in God" is weaker than "atheist," since it could be interpreted to include agnostics.  Unfortunately, those questions have not been repeated.


[Date from the Roper Center for Public Opinion Research]
Posted by David Weakliem at 12:25 PM No comments:

A lot of the coverage of Donald Trump's decision to impose tariffs on steel and aluminum has talked about how this is a departure from the traditional Republican position.  For example, this story in the New York Times says  "Mr. Trump has strayed from the party’s traditional orthodoxy of embracing free and open markets," quotes Republican senators Orrin Hatch and Ben Sasse with critical remarks, and then Sherrod Brown (D-Ohio) with a positive comment.  I've said it before, but it's worth saying again:  support for free trade is not a traditional Republican or conservative position.  For example, a 2008 Fortune/Abt SRBI poll asked people how they felt about a proposal to "Place high tariffs on goods coming from countries that produce low-priced goods so that American companies can compete with them."  60% of conservatives, 64% of moderates, and 57% of liberals said they were strongly or somewhat in favor.  The breakdown by party ID:  64% of Republicans, 59% of Democrats, and 66% of independents in favor.  That is, partisanship and ideology made little if any difference.

Education mattered:  68% of people with no college were in favor, compared to 52% of college graduates.  So did gender:  68% of women and 54% of men were in favor.   However, as I observed in my previous post, tariffs are pretty popular with all segments of the general public.  The groups that are strongly against them are elites, or more exactly professional and diplomatic elites, and people who listen to those elit

[Data from the Roper Center for Public Opinion Research]
Posted by David Weakliem at 10:35 AM No comments: