Since the 1970s, the Gallup Poll has asked "I am going to read you a list of institutions in American society.  Please tell me how much confidence you, yourself, have in each one--a great deal, quite a lot, some, or very little?"  The list has changed, but there is at least twenty years of data for the following:  the church or organized religion, the military, the US Supreme Court, banks, the public schools, newspapers, Congress, television news, organized labor, the presidency, the police, the medical system, the criminal justice system, and big business.  Tables giving the data are available at the Gallup website.  I converted them to figures in order to get a clearer sense of changes--the y-axis gives the percent saying they have "a great deal" or "quite a lot" of confidence.

I don't think anyone will be surprised to see that confidence in all three branches of government has declined, with Congress taking the biggest loss: 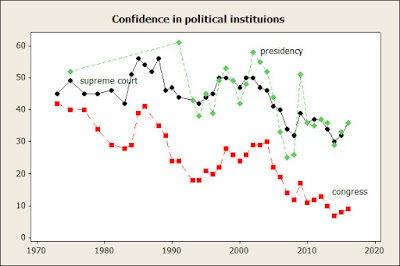 Or confidence in the media: 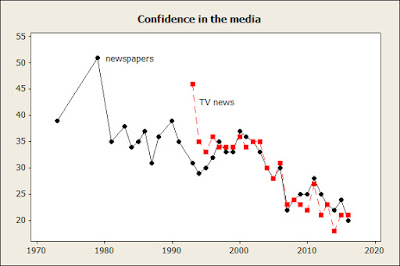 Confidence in big business and labor was never high, but it's declined for both.  Confidence in banks had ups and downs, but was generally pretty high until the onset of the 2007-8 recession, when it suffered a fall from which it hasn't bounced back: 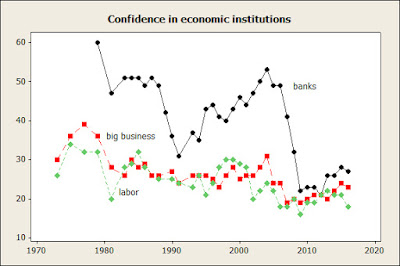 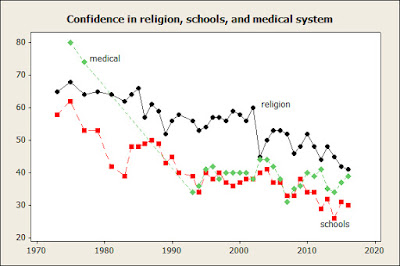 So far, confidence in everything has declined.  You could offer specific explanations for each one, but the fact that it's so widespread suggests that the declines reflect a general mood of dissatisfaction.  I think the decline for public schools is particularly telling, since if you go by the numbers academic performance has improved since the 1970s.

But the decline in confidence isn't universal: 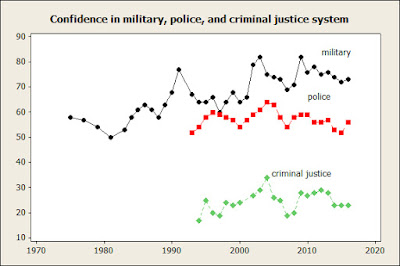 Confidence in police and the criminal justice system has stayed about the same since the early 1990s, and confidence in the military has clearly increased since the 1970s.

It's not possible to say what the "right" degree of confidence in any institution is.  Still, a situation in which confidence is highest in the military and the police doesn't seem healthy.

Posted by David Weakliem at 9:54 PM