Race to the bottom?

A few months ago, four economists writing in support of Jeb Bush's tax plan said we are experiencing "the weakest economic expansion since World War II."  I was going to do a post on that subject, but didn't get around to it.  I was reminded of the issue when Paul Krugman posted a figure showing better economic performance under Obama than under GW Bush.   If Obama is the worst, how could Bush have been even worse?

The National Bureau of Economic Research provides dates of the beginning and end of recessions (an expansion is anything that's not a recession).  Those go back to the 1850s, but modern data on GDP go back only to 1947, so I looked at recessions and expansions since then.  The current expansion has indeed had the slowest average growth rate, breaking the record previously held by the 2002-7 expansion, which broke the record previously held by the 1991-2000 expansion.  You may notice a pattern here.  This is a scatterplot of average GDP growth in expansions since the late 1940s--the x axis is just a sequence number. 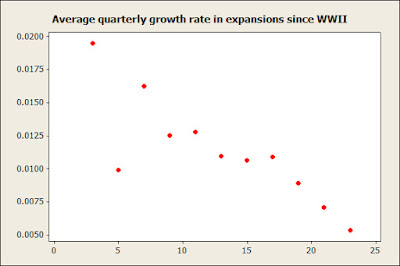 There's definitely a pattern there--the average growth keeps getting smaller.  Hopefully that won't go on forever.  The good news is that the average duration of expansions has tended to increase.  The latest one, which started in the third quarter of 2009, is already longer than average, and is still going on. Another way to make the same point is to say that recessions are becoming less frequent. 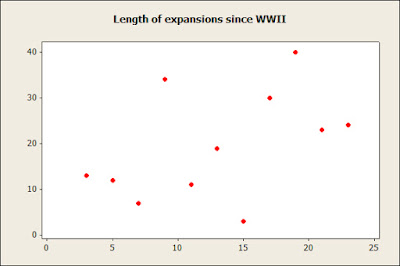 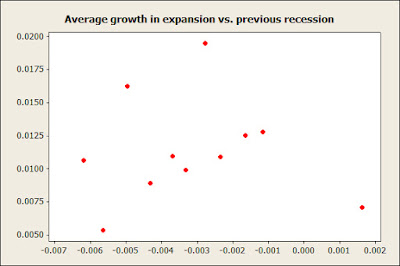 So under Obama, it's been slow expansion, but almost all expansion (everything except the first quarter or two); with GW Bush, it was slow expansion and quite a bit of time in recession.


Posted by David Weakliem at 9:47 PM No comments:

Many democratic nations have laws against "hate speech."  The United States does not--it's safe to say that the immediate reason is because the courts would strike them down as violating the first amendment, but I wondered if the difference in laws corresponded to a difference in public opinion?  I couldn't find any questions specifically on "hate speech," but in 2006, the International Social Survey Programme asked about "people whose views are considered extreme by the majority.  Consider people who want to overthrow the government by revolution.  Do you think such people should be allowed to . . . hold public meetings to express their views" and "publish books expressing their views?"  The choices were "definitely," "probably," "probably not," and "definitely not."

I summed the answers to the two questions, counting definitely as 4, probably as 3, etc.  The average in the United States is 6.39--ie slightly more favorable than "probably."  This was the highest value in the 33 nations surveyed, by a pretty substantial margin.  The complete list:

What I find most interesting is that the US and other countries with a British heritage don't have much in common, in contrast to views on inequality.  That is, relatively high support for the rights of "extremists" is not part of some general cultural heritage, but something distinctive to the United States, presumably attachment to the Constitution, and especially the Bill of Rights.    Another striking point is the difference between Portugal (second most favorable) and Spain (second least favorable).  I wonder if it has to do with the way that they emerged from dictatorships in the 1970s?  In Portugal, it was a revolution, or at least a coup--the dictatorship was forced out of office.  As a result, "revolution" may have a favorable sound.  In Spain, the transition was guided by a constitutional monarch.
Posted by David Weakliem at 6:01 PM No comments:

Back in August, I said that Donald Trump's appeal was similar to Ross Perot's in 1992:  it was based on economic nationalism.  Another view, which seems to be gaining in popularity, is that his appeal is based on racial and ethnic prejudice--comparisons to fascism are popular, but you could also look to what Geoffrey Wheatcroft calls the "long and unlovely American tradition of know-nothing bigotry and nativism."  George Wallace would be an example.

The difficulty in distinguishing these interpretations is that economic nationalism, and particularly opposition to immigration, could be a disguised form of racial and ethnic prejudice.  Although surveys show a substantial decline in straightforward expressions of prejudice, many social scientists say that the underlying attitude is still there--people just don't reveal it as directly.  In effect, saying that you're against "illegal immigration" is an acceptable way of indicating that you're against non-whites.

You can also look at support for deportation among different groups.  It was highest among non-Hispanic whites (56%), but not that much lower among blacks (42%), Asian-Americans (46%), people of mixed race (56%), and "other" (47%).  Even among Hispanics, there was significant support (24%).

I think these results count against the idea that a call for general deportation of illegal immigrants is primarily a coded appeal to racial prejudice.  They also raise a question of why Trump is the only candidate who advocates (at least so far) a fairly popular position.  The main reason is probably that people who have been involved in policy-making regard it as totally impractical--it's not just that it would involve enormous numbers of people, but many families include minor children who are citizens, it would complicate foreign relations, have negative effects on the economy......    Plus there would undoubtedly be many sympathetic individual cases--people who had been in the United States for most of their lives, were well-liked by their neighbors, were to ill to travel safely, etc.  As a result, a policy of mass deportation might not remain popular if it were implemented.  As an outsider, Trump isn't restrained by these kind of considerations.

So I'd continue to put Trump closer to Perot than to Wallace.  Or maybe I should say "Trump supporters"--Trump the man is one of a kind, as he would be the first to tell you.

Posted by David Weakliem at 9:28 PM No comments:

This post was inspired by the "is Donald Trump a fascist?" debate.  I think that trying to define the essence of fascism is a pointless exercise, but like a lot of pointless exercises, it's hard to resist.  If I were to give a definition, one of the key features would be irredentism:  the belief that one's nation has a historical and/or cultural right to some territory that is currently part of another country.

That reminded me that a Pew survey from 2002 which I've written about before asked people for their views on the statement "There are parts of neighboring countries that really belong to [survey country]."    The options were strongly agree, mostly agree, mostly disagree, and strongly disagree.  About 13% said "don't know"; rather than treating those as missing values, I regarded them as a form of disagreement--in effect, "not as far as I know."  To simplify things, I reduced the answers to agree and disagree plus don't know.

In the United States, 29% agreed.  That was 38th of 42 nations in the sample--only Kenya, Ukraine, France, and Canada were lower.  Still, it was higher than I expected--given the geographical location of the United States and its history of expansion, it's hard for me to imagine what "parts of neighboring countries" people could be referring to.  None of the questions in the survey illuminate this point, but I looked at what kinds of people were more likely to say yes.  Education was an important factor:  over 40% of people who were not high school graduates agreed, but only 13% of those with a graduate degree.  Agreement was higher among conservatives, people who said that religion was more important in their lives, and people who said the government controls too much of our daily lives.

So far, this is starting to sound like it fits into the usual right wing plus disaffected working class account of Trump supporters.  Maybe they would respond to a call for "fifty-four forty or fight"? But there are some discordant findings.  Racial/ethnic differences are small, but agreement is higher among blacks and Hispanics than among whites.  People who agreed that the government had a responsibility to take care of poor people who couldn't take care of themselves were more likely to agree.  Views on a couple of questions suggesting alienation from the government (when something is run by the government, it's usually inefficient and wasteful and the government is run for the benefit of all the people) had little or no relation to views on whether their were parts of other countries that really belonged to us.

Rather than a hidden reservoir of irredentist sentiment, I suspect that the "agrees" represent a combination of historical ignorance and idiosyncratic answers (for example, I could imagine someone treating Guantanomo Bay as a reason to say yes).

[Data  from the Roper Center for Public Opinion Research]
Posted by David Weakliem at 5:37 PM 2 comments:

As I said in my last post, most discussions of the "Phillips curve" consider the relationship between unemployment and prices, but Phillip's idea (which is a straightforward application of supply and demand reasoning) implies a relationship between unemployment and real wages.  Of course, the two are related, because the change in real wages is the difference between the change in money wages and change in the price level.  I calculated the equilibrium values of the annual rate of change in both for different levels of unemployment (see note 1 at the end for details):

Posted by David Weakliem at 5:18 PM No comments:

The Curve Nobody Knows

Recently there has been a lot of discussion of the "Phillips curve" in the media.  It's usually described as involving the relationship between unemployment and inflation.  Phillips actually wrote about the relationship between unemployment and wages, but even people who remember that treat the step from an increase in wages to an increase in the general price level as automatic.  For example, Justin Wolfers says "lower unemployment would yield higher wage growth and hence higher inflation."

Phillips's opening sentences were:  "When the demand for a commodity or service is high relatively to the supply of it we expect the price to rise . . . . Conversely when the demand is low relatively to the supply we expect the price to fall . . . . It seems plausible that this principle should operate as one of the factors determining the rate of change of money wage rates, which are the price of labour services."  That is, he was talking about about relative prices, not the price level.  If the "commodity or service" is used to produce other goods and services, there will be some spillover into the general price level, but it won't wipe out the change in relative prices.  In the case of the "price of labour," a given amount of labor can be exchanged for more goods--real wages will rise.

The estimate for 1/unemployment is not significantly different from zero (t=1.3).

Here's a regression of change in wages on change in the CPI last year and 1/unemployment:

The estimate for 1/unemployment is significantly different from zero (t=3.5).

I used change in manufacturing wages because that has been collected for the whole period.  A broader measure of change in wages (private, non-supervisory) is available starting in 1964.  The results:

The estimated effect of unemployment is almost the same and the t-ratio is actually larger.

Finally, what about the "hence" connecting wage increases and inflation?

So only a fraction of wage increases get passed through to price increases.  The primary result of low unemployment is higher real wages, as Phillips suggested.  Oddly, this point seems to have been forgotten as more sophisticated models were developed.