In a recent post, I discussed a Pew survey of eight nations in 1994 that asked whether various things were good or bad influences "on the way things are going in this country" (people could volunteer "neither" or "both").  Americans were unusually positive about religion (73%-15%, more favorable than all except Mexico), computers and technology (85%-7%, also second after Mexico) and the military (71%-18%, most favorable).

*in some nations, they asked about "TV variety shows," but the documentation doesn't specify which ones.
Posted by David Weakliem at 6:04 PM No comments:

What's a Democrat worth?

When straightening up my office at the end of the semester, I ran across a paper by Alan Blinder and Mark Watson that came out this summer.  It points out that since the 1940s the American economy has grown faster under Democratic presidents than under Republicans--a lot faster.   If we restrict it to the complete presidential terms in the data (starting with Truman 1949-53 and ending with Obama's first term), per-capita GDP growth has averaged  12.4% per term under Democrats and 5.7% under Republicans.

The ranking of individual terms is shown below--the worst performance among Democrats (Obama) is almost equal to the Republican average.


As Blinder and Watson observe, the difference "while hardly a secret, is not nearly as widely known as it should be."   Ironically, the magnitude of the difference is probably part of the reason that it's not well known.  Given that the American economy is large and complex, and that presidents don't have total control over government policy, it's hard to believe that presidents could make this much difference.  So any reasonable person has to say that a lot of it is "luck"--growth varies in mysterious ways, and the Democrats just happened to be there when growth was stronger.  Once you've allowed a lot of it was luck, it's easy to assume that it was all luck.  So even people who know this fact don't talk about it, because they assume that it's just a fluke (that was my first thought when I encountered it in Larry Bartels's Unequal Democracy).

But this is not a reasonable conclusion.  The reasonable conclusion is a compromise--that the observed difference is partly luck and partly "real" (that is, the result of differences in economic policies). More precisely, you can obtain a Bayesian estimate by specifying a distribution that represents your prior beliefs and combining it with the evidence of the data.  For a prior, I took a normal distribution with mean 0 and standard deviation of 1.  That amounts to assuming about a 67% chance that any real effect over a term is less than 1%, 95% chance that it's less than 2%, and almost no chance (less than 1 in a billion) that it's as large as the observed difference of 6.7%.  So this distribution amounts to a strong prior belief that any difference will be small.  Since the normal distribution is symmetrical, the chance of an x% difference in favor of the Republicans is the same as the chance of an x% difference in favor of the Democrats.

Given this prior distribution, after observing the data there is about an 85% chance of a real difference in favor of the  Democrats.  The most likely value is a 0.9% difference in favor of the Democrats.  That doesn't sound like much, but for someone earning $50,000 a year, it would mean they could expect to earn about $450 more at the end of a Democrat's term than at the end of a Republican's term (and given that growth compounds, $450 a year more for the rest of their life).

On the other hand, there's a 15% chance of a real difference in favor of the Republicans--that is, that Republican policies were more effective in producing growth, but because of bad luck they ended up with worse performance.  So the data don't give a definitive answer, but if you're betting, 85% sounds pretty good.

Of course, you don't have to accept my prior distribution, but the point is that luck vs. a real difference isn't all-or-nothing choice.
Posted by David Weakliem at 5:33 PM No comments:

A few days ago, I saw an article that referred to a survey question on "confidence in police officers in your community to treat blacks and whites equally."  That question has been asked seven times starting in 1995, most recently in December 2014.  Among whites, confidence rose substantially between the last two times it was asked, September and December 2014, and the level of confidence in December 2014 was the highest ever.
This led me to look for other questions on the subject--specifically, for questions about police in the country as a whole rather than your own community.  The good news is that there are some, and that they go back to 1981.  The bad news is that they stop at 2000.  The two questions that were asked multiple times:  [agree or disagree that] "these days police in most cities treat blacks as fairly as the treat whites" and "do you think the police in most big cities are generally tougher on whites than on blacks, or tougher on blacks than on whites, or do the police treat them both the same?"  I summarize the results as percent favorable (agree or treat both the same) minus unfavorable.  (The percent saying they were tougher on whites ranged from 0 to 2--I combined them with treat both the same). 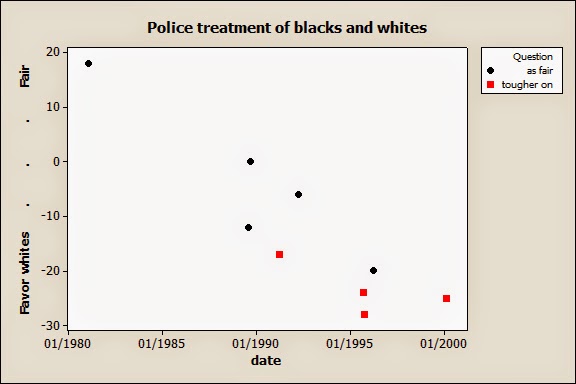 Between 1981 and 2000, there was a substantial move towards seeing treatment as less fair.  The figures are for blacks and whites combined, but given that blacks are only about 12 percent of the population, there must have been a substantial move in this direction among whites.

Posted by David Weakliem at 6:42 PM No comments:

The United States is fairly favorable by international standards.  I expect that the unfavorable opinions in France and Italy were because strikes were more frequent there, and public opinion is usually negative about strikes (or any kind of disorder).  I'm not sure about Canada--I'd have to check if anything special was going on in 1994.  But American opinion being as positive as West German is a surprise.

The survey also asked the same question about other things, including business executives or management.  The results:

The United States is not unusual here:  the surprises are Canada and France.

The full report can be found at the Pew Research Center website.  It's not clear if the individual-level data have been preserved.

The title for my last post was especially appropriate, since I overlooked the obvious question about the popularity of unions.  As Andrew Gelman pointed out in a comment, the Gallup poll has asked people "Do you approve or disapprove of labor unions."  A figure can be found at the Gallup web site:  it shows a substantial decline in approval between the 1950s and late 1970s, and probably some decline between the late 1970s and now.

The question I looked at in my last post showed no clear change between 1952 and the 21st century, so I looked for additional questions on unions that covered a long period of time to see which way they pointed.    There are two questions that go back to the 1940s or 1950s--there is some variation in question wording, but they seem close enough to be roughly comparable

There are also a substantial number of questions asking if people are favorable or unfavorable, but they don't start until the 1985.  I would characterize them as showing some increase in favorable views from the 1980s to the early 2000s and some decline since then, with no definite trend over the whole.

Putting it together, it seems like there was a substantial decline in support for unions between the 1950s and the 1970s/1980s, some increase until the early 2000s, and some decline more recently.  Returning to my original question of whether unions are popular or unpopular, I'd still say that opinions are somewhat favorable, although not strongly so.