The following figure gives the average rate of change in consumer prices in the 34 nations that are members of the Organisation for Economic Cooperation and Development.  (The simple average would be strongly affected by a few very high rates, so I transformed them to normal scores before taking the average). 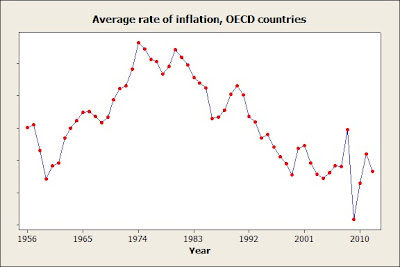 There are some ups and downs, but the general picture is of a rise from the mid-1960s to the mid-1970s, roughly ten years of high inflation, and a pretty steady decline since then.  Paul Krugman recently considered a larger sample of countries since 1980 and found that high (double or triple-digit) inflation has become less common.  In affluent countries, even moderate inflation has become rare--in 2012, the rate of inflation was over 6% in only one of the OECD countries (Turkey).  In 1980 it was under 6% in only two (Germany and Switzerland).
Posted by David Weakliem at 9:44 PM No comments:

In 1939, the Roper Organization asked people to choose from five statements giving their feeling about New York City.  In 1992, they repeated the same question.  The distribution of responses:

The three mixed responses were about equally common on both occasions, but there was a big decline in "one of the best" and big increase in "one of the worst."  In 1992, New York  had just finished a couple of bad decades--it would be interesting to repeat the question today and see if its reputation has bounced back.
Posted by David Weakliem at 5:34 PM No comments:

More on the "Perot coalition"

Sean Trende said that Ross Perot appealed to "downscale" voters because "his campaign was focused on his fiercely populist stance on economics."  As I noted a previous post, Perot's strongest support actually came from the middle class.  Also, as I remember it, his campaign wasn't focused on economics, but on "fixing the mess in Washington."  Perot's pitch was that he was an outsider, a businessman with no history of political involvement, who would straighten things out by applying common sense.  In his more visionary moments, he talked about "electronic town hall meetings" in which the people could weigh in directly.

Of course, that's just my memory, and it's hard to get clear evidence on what a campaign was about.  But there was a lot of dissatisfaction with government in the early 1990s.  This is an index based on questions in the American National Election Studies.* 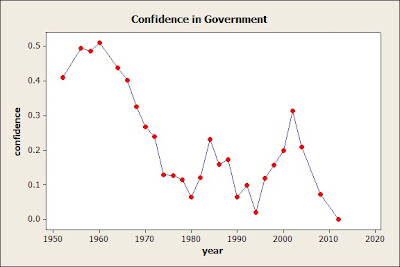 It's not clear why people were so discontented in the early 1990s.  The two biggest events around that time were the breakup of the Soviet Union and the first Gulf War, which could both be claimed as major successes for the American government.  There was a recession in 1990-1, but it was pretty mild.  But whatever the reason, people were unhappy with the government.  All this suggests that Trende is right in the most general sense:  that there are parallels between 1992 and today.  But they don't involve "downscale" voters and economic populism (especially a "populism" based on being a "deficit hawk").

Posted by David Weakliem at 3:04 PM No comments:

Dissatisfied but not unhappy

Last week Maureen Dowd wrote a column about how the France had fallen into a mood of general malaise.  Today Roger Cohen wrote a column saying that he'd said the same thing back in the 1990s, but now realized that pessimism or cynicism was an enduring characteristic of the French.    Dowd seemed to say the same thing at the end of her column--the difference is that Cohen seemed to think it was just a foible while Dowd seemed to think it indicates something profoundly wrong with the French (which is not to single out the French--she seems to think there's something profoundly wrong with virtually everyone).

There have been quite a few international surveys that ask people about happiness or related issues.  The World Values Survey includes both a question on happiness--"taking all things together, would you say you are very happy, rather happy, not very happy, or not at all happy?"--and one on satisfaction "all things considered, how satisfied are you with your life as a whole these days?" (rate on a scale of 1 to 10).  On average happiness, France ranks 14th out of 57 countries in the 2005-6 wave.  That is a bit low given its economic level, but not remarkable (ahead of Italy, Spain, and Germany).  But France is only 34th on satisfaction, the lowest of any "Western" nation (Western Europe plus Canada, the US, Australia, and New Zealand) in the survey.  The figure below gives more detail on those nations: 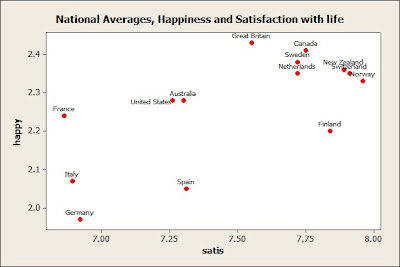 France and Britain are (relatively) more happy than satisfied; Germany, Spain, and Finland seem to be more satisfied than happy.  Surprisingly, Americans and Australians, who have reputation for being optimistic, don't rank all that high on either, and the British, who have a reputation for grumbling, rank first in happiness among these nations (second in the whole sample, behind Mexico).
Posted by David Weakliem at 5:09 PM 2 comments:

Sean Trende of Real Clear Politics argues that the Republican loss in 2012 was because white turnout was down.  Specifically, turnout among "downscale, Northern, rural whites. In other words, H. Ross Perot voters."  He goes on to say "the 'Perot coalition' . . . was strongest with secular, blue-collar, often rural voters who were turned off by Bill Clinton’s perceived liberalism and George H.W. Bush’s elitism."  They were attracted to Perot because "His campaign was focused on his fiercely populist stance on economics. ... Given the overall demographic and political orientation of these voters, one can see why they would stay home rather than vote for an urban liberal like President Obama or a severely pro-business venture capitalist like Mitt Romney."

Perot voters were definitely white:  only 2% of the blacks in the American National Election Studies sample said that they voted for him.   Trende is right about the "secular" part too:  if we break the sample into people who said they attend religious services every week and those who don't (all results from now on are just for non-black voters)

Perot actually did best among businessmen, not blue-collar workers.  There's a reason I said "businessmen" instead of a gender-neutral term:

So no matter how you look at it,  Perot voters were not "downscale" or blue collar or working class.  They were primarily  middle class, or slightly above the middle.  The interesting thing here is the tendency of many political commentators to assume that every "populist" movement appeals mostly to the working class.
Posted by David Weakliem at 8:38 PM No comments:

The rich get poorer?

But which is better, having a salary of $200,000 and $300,000 in investments or having a salary of $250,000 and $300,000 in investments?  Of course, if there was actually a long-term decline in the rate of return on investments, then that would be bad for affluent people, but that doesn't seem to be the case.  Investment returns (especially stocks) just go up and down from year to year--there's some relation to the business cycle, but it's not very strong.  So in effect, they're adding an error term (investment returns).  Doing that naturally makes it harder to see the trend (the rich have gotten richer).