None dare call it redistribution

A letter to the New York Times on Sunday protested against the language in the article in public opinion towards redistribution mentioned in my last post.  I no longer have my copy of the Sunday paper, and can't find the letter online [it finally appeared--May 19], but the author said that the issue wasn't about "soaking the rich" or "redistribution," but about fairness, and that surveys showed most people didn't think that they rich paid their fair share of taxes.

This reminded me of a story in 2013 about how the White House was avoiding the word "redistribution."  From the story:  "'Redistribution is a loaded word that conjures up all sorts of unfairness in people’s minds,' said William M. Daley, who was Mr. Obama’s chief of staff at the time. Republicans wield it 'as a hammer' against Democrats, he said, adding, 'It’s a word that, in the political world, you just don’t use.'"

Here is the distribution of responses to the ISSP question about taxes:

The median answer is "about right," but more people think they are too low than too high.

The Gallup Poll has asked "People feel differently about how far a government should go. Here is a phrase which some people believe in and some don't. Do you think our government should or should not redistribute wealth by heavy taxes on the rich?"  The last time it was asked (April 2013) responses were like this:

Close, but most people were on the "redistribute" side.

The ISSP also asked people to respond to the statement "It is the responsibility of the government to reduce the differences in income between people with high incomes and people with low incomes."

Finally, the General Social Survey "Some people think that the government in Washington ought
to reduce the income differences between the rich and the poor, perhaps by raising the taxes of wealthy families or by giving income assistance to the poor. Others think that the government
should not concern itself with reducing this income difference between the rich and the poor. "

If you treat 4 as equivalent to "neither agree nor disagree" 46% are basically in favor of the government reducing income differences, 36% basically opposed.

Taking the questions together, it seems that you can conclude the following:
1.  Americans don't react negatively to the term "redistribution."
2.  What Americans do react negatively to is "responsibility of the government."  Of course, I don't know what people who disagreed had in mind, but I'd guess it's something like this--"it's the responsibility of people with low incomes to work hard and improve their own situation."
3.  People are pretty evenly divided--more are in favor of the government acting to reduce the gap than opposed, but it's not a big difference.


Posted by David Weakliem at 8:46 PM No comments:

What Don't We Want?

The New York Times has had several articles recently noting that growing inequality over the last 40 years hasn't led to growing support for redistribution.  One of them, entitled "Why Americans Don't Want to Soak the Rich," says that since the 1970s "Americans’ views on whether the government should work to redistribute income — to tax the rich, for example, and funnel the proceeds to the poor and working class — have, depending on which survey answers you look at, either been little changed, or shifted toward greater skepticism about redistribution."  I agree with that--I'd favor the "little change" summary, but you could argue it either way.  Then it says "in other words, Americans’ desire to soak the rich has diminished even as the rich have more wealth available that could, theoretically, be soaked."

I don't agree with that--at least the "in other words" part, because taking from the rich and giving to the poor are two different things.  There are lots of survey questions about aid to the poor, but few about taking from the rich.  There are some that combine the two issues, for example by asking about "reducing differences between people with high incomes and people with low incomes," but then you don't know which aspect people are focusing on in their answers--my guess is that it's the low incomes side.  So we don't really know how opinions about "soaking the rich" have changed. The same is true for international comparisons:  there's a lot of evidence that Americans are less favorable to aid to the poor than people in Western Europe, but very little on opinions about  taking from the rich.

But the 2009 edition of the International Social Survey Programme, which I've written about before, contains some interesting information.  It had the following questions:

Overall, the United States is one of the least egalitarian nations, but there are differences among the questions.  I give the standardized scores, which are comparable across questions, with higher meaning less egalitarian:

2.83  government responsibility to reduce differences
2.20  government should provide for unemployed

1.27 differences in income are too large
*1.00 people with high incomes should pay a larger share in taxes

The two items with asterisks involve the rich.  Americans are less favorable to "soaking the rich" than average, but the differences aren't that big--in fact, Americans are barely different from the average in views about whether taxes for people with high incomes are too high or too low.   The American mean is  3.29 and the mean for all nations is 3.34 on a scale of 1-5, with 3 meaning about right and higher scores meaning too low).

Where the United States really stands out is the two questions that mention the government's responsibility.
Posted by David Weakliem at 6:05 PM No comments: 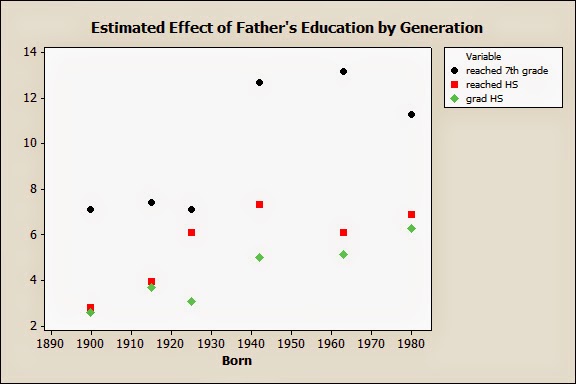 There is an upward trend in the influence of father's education on all three transitions.  More exactly, there was an upward trend, although it's not clear that it's continued in the last couple of generations.

This figure shows the next two--attending college and graduating from college given that you attended.  Again, both show an upward trend. 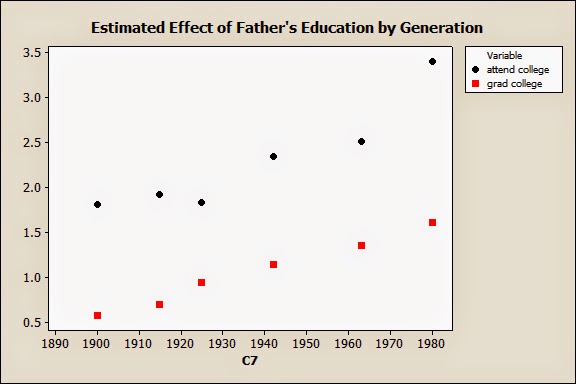 There's one more transition--getting graduate education--but the effect of father's education is near zero in all generations.  That is, if you've graduated from college, how much education your father has doesn't predict whether you will get graduate education.

In a recent article, Thomas Edsall gave a graph showing that the percentage of people saying that religion was losing influence had increased substantially between 2012 and 2014.  I thought that the question went farther back than that, so I searched for it.  I got more than I bargained for, because it was asked no less than 78 times between 1957 and 2014, first by Gallup, which still asks it from time to time, and then by other organizations, notably Pew.  The exact question is:  "At the present time, do you think religion as a whole is increasing its influence on American life or losing its influence?"  Sometimes people volunteered that it was staying the same, or some other intermediate answer like "some of both," but those number varied widely (from 1% to 17%), so I think that organizations must have differed in the extent to which they pressed for an answer.  To take them out of the picture, I took the odds of "increasing" to "losing."  For example, the last time it was asked, 22% said increasing and 72% said losing, for odds of about 1:3.3.  Here are the results over time (shown on a log scale): 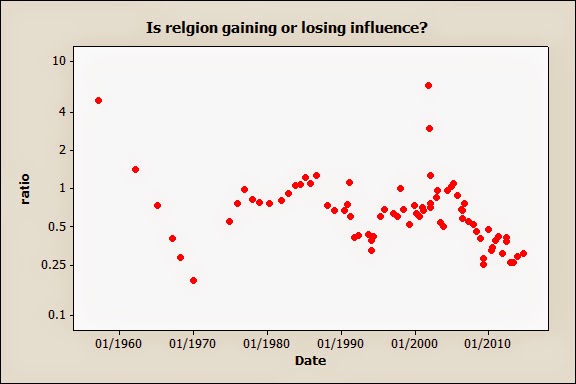 This is a follow-up to my post of a couple of weeks ago.  In the general media, I've encountered a lot of claims that educational mobility is declining--that it's become less common for children of parents with little education to move "up" or children of parents with lots of education to move "down".*  Although I'm reasonably familiar with the scholarly literature on occupational and income mobility, I don't know of anything on educational mobility, and a search of Google Scholar didn't come up with anything very promising.

So I did a basic analysis using the General Social Survey, which asked people how much schooling they had, and also how much their father had.  I made a tables of father's education by own education for six groups:  born in 1909 or before, born 1910-19, 1920-29, 1930-54, 1955-69, and 1970-90.  Both were classified into seven categories:  6th grade or less, 7th or 8th grade, some high school, high school graduate, some college, college graduate, and graduate education. I restricted this to white men because it seems pretty likely that the trends will be different for women and non-white men, and to people age 25 or over because many of those below that age are still in school.

I fit a model that described the changes with a single number representing the difference from the last cohort.  The number represents the association between father's and son's education, so high numbers mean less mobility.  Here are the results as a figure: 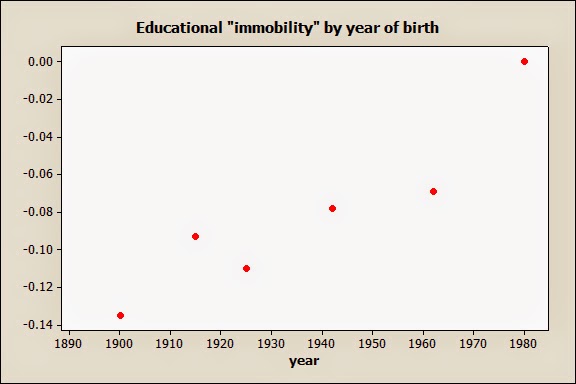 The conventional wisdom seems to be right:  the association is substantially higher in the last generation (people born 1970-90), although there was some upward trend before then.  The scale of the vertical axis isn't meaningful, but in a rough way you could say the association is about twice as strong in the youngest cohort as in the oldest.

*I mean those in relative terms--how much education a person has relative to what other people in their generation has.  In an absolute sense, upward movement has been much more common, because average levels of education rose from generation to generation until the 1970s.
Posted by David Weakliem at 6:44 PM 2 comments: