[Data from the Roper Center for Public Opinion Research]
Posted by David Weakliem at 9:08 PM No comments:

Not sure I believe this

"How serious a problem do you think racial discrimination against blacks is in this country--a very serious problem, a somewhat serious problem, not too serious, or not at all serious?":  This question was first asked in October 1995 and repeated a number of times, most recently in September 2016.  The means, with "very serious" counted as 4, "somewhat" as 3, "not too" as 2, and "not at all" as 1: 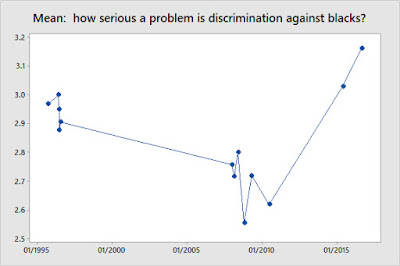 There is a decline between 1995-6 and 2008-10, but then an increase.  The lowest value was in November 2008, just about the time that Barack Obama was elected president.  As the title suggests, I'm not sure I believe that there really was a large increase between 2010 and 2015-6.  It seems that answers to this question might be influenced by context--if you ask the question after questions about various kinds of racial inequality, ratings of seriousness would be higher than if it's part of a serious of miscellaneous questions.  Perhaps the surveys were different in this respect.  However, the possibility of a shift is interesting, since most recent commentary on racial attitudes has emphasized the lack of change--for example, a column by Thomas Edsall in the New York Times today said that Obama's health care proposals "hit the wall that often confronts Democratic policymakers: race" and drew parallels to the late 1960s.

If there was a change between 2010 and 2015, and a further change between 2015 and 2016, why did it happen?  The most obvious possibility would be the publicity given to police violence against blacks, which in many cases was supported by video evidence.  Some people argue that this led to a backlash, with whites rallying around police, but maybe it had a straightforward effect--some people were persuaded that there was a real problem.

[Data from the Roper Center for Public Opinion Research]
Posted by David Weakliem at 9:09 PM No comments:

I had posts a couple of weeks ago about views of the "honesty and ethical standards" in various occupations.  The figures for "college teachers" had an unusual pattern, rising from the 1970s until about 2000 and then declining.  Breakdowns by party ID are available for some years and shown in this graph: 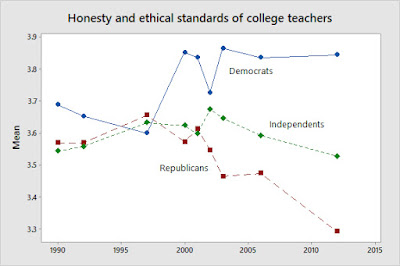 Also divergence, although it grew more in the 1990s--most of the divergence on college teachers was after 2000.

Maybe a slight divergence, but nothing dramatic.  The substantial changes are for two groups that are favorite targets for conservatives.  It's also worth noting that there are obvious reasons that the ratings of executives would have declined between 2000 and 2012, just because of the state of the economy.  However, that doesn't apply to college teachers--the economy has ups and downs, but the amount and quality of what professors do doesn't change much from year to year.  So my guess is that conservative media outlets just started running more stories about outrages on college campuses, and ratings among Republicans declined as a result.  The rise among Democrats might have been a reaction to that, but I think it's more likely to be a continuation of the previous upward trend (which I would attribute to more people having attended college).

[Data from the Roper Center for Public Opinion Research]
Posted by David Weakliem at 10:44 PM No comments:

In 1992, a poll asked "In your view, are most people who receive welfare payments genuinely in need of help or are they taking advantage of the system?"  The question was asked several times over the next couple of years, and then there was a long gap before it was asked in 2012, and then in 2016 and 2017.  The figure shows percent saying "genuinely in need" minus percent saying "taking advantage." 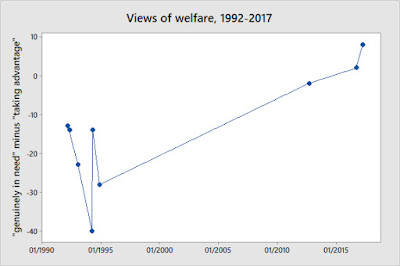 Views are considerably more favorable in recent years--in fact, the April 2017 survey is the first one in which more than half chose "genuinely in need."  Why the change?  Several possibilities occur to me:
1.  Welfare may be less strongly associated with race in the public mind.  At one time, blacks were overrepresented in news stories on poverty and welfare.  I don't know about more recent research, but it seems possible that news organizations became more aware of this and made efforts to avoid it.  My impression is that there is more attention to small-town and rural (that is, mostly white) poverty than there used to be.  If there has been a change in media coverage, public perceptions might have followed.
2.  Animosity to blacks is declining, so even if welfare is still associated with race, people may not be as bothered by the idea that the government is spending to help blacks.  The idea that there has been real decline in anti-black prejudice is not popular in sociology now, but there's a lot of evidence for it.
3.  It may be a result of changes in anti-poverty programs.  There's been a big growth in the Earned Income Tax Credit and Child Tax Credit, which are popular, rather than AFDC/TANF, which are not.  Also, my guess is that welfare programs are administered more efficiently now--one thing that computers are good for is keeping track of people and money.


Notes:
1.  See this post for a related question.
2.  I noticed a poll from 2013 which showed 30% "genuinely in need" and 56% "taking advantage"--more like the 1990s than the other surveys from the 2010s.  But on reading the fine print, I found that it was a sample of Hispanics only.  Hispanics have more negative views of welfare than non-Hispanics?  Apparently yes--I checked one of the other recent surveys and it was the case there.

Posted by David Weakliem at 7:03 PM No comments:

Changes in average ratings of the "honesty and ethical standards" of more occupations.  First, some professions: 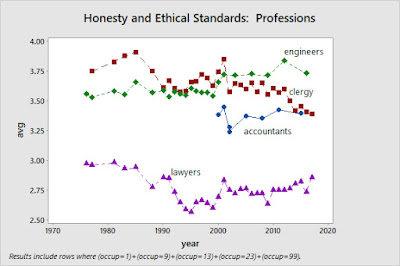 Ratings of the clergy declined over most of the period, and ratings for lawyers might have declined a little.  Engineers increased, and there was no clear change for accountants.
Ratings for professions related to medicine rose; 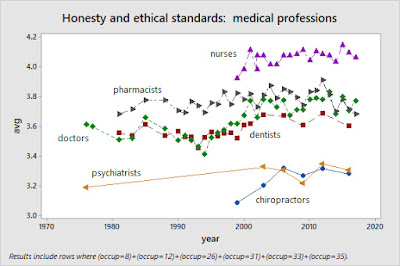 Then some occupations that don't fit into any of the previous categories.  They generally increased. 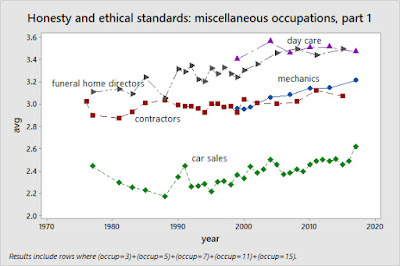 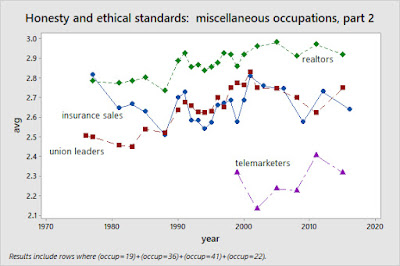 Finally, a group that's of particular interest to me.  There's a unique pattern for college teachers:  an increase until about 2000 and then a decline, with a big drop between 2012 and 2016.  Data for elementary and high school teachers don't begin until about 2000, but both of them seem to have a declining trend since then. 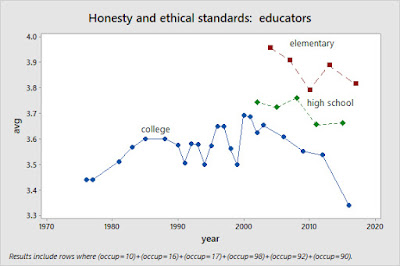 That's a lot of data.  What conclusions can be drawn?  Here's what I notice:

1.   There are more upward than downward trends.  And the trends are upward for almost all of the "ordinary" occupations--ones that are not in the news or the subject of political controversy.   General trust in people has been declining since the 1970s, and you might think that this would lead to a declining trust in most occupations.  But this is not what has happened.
2.  Almost all of them rose in 2001.  Of the 21 occupations which were included in 2000 and 2001, 19 had increased, and the two declines were very small.  This was presumably because the 9/11 attacks (the 2001 survey was taken in late November) created more general solidarity.  I thought that the increases might be larger for occupations that could be seen as closer to the center of American life, but there was no obvious pattern.
3.  There are differences among the political occupations.  Members of Congress and Senators declined a lot after 2000, governors and state officeholders declined by a smaller amount, and local officeholders didn't decline at all.   That is, people are making distinctions, at least to some extent:  turning against congress more than against "government" or "politics" in general.
4.  The decline for all types of journalists is pretty closely.  I thought it might track views of politicians (especially Congress) more closely--that is, that journalists would be blamed when they brought bad news.  But there's not much sign of that.

I also have some thoughts about the recent decline for college teachers, which I will discuss in a future post.
Posted by David Weakliem at 2:39 PM No comments: