Is anything else holding back the recovery?

In a recent post, I compared nations and found no evidence that ones with more inequality are recovering more slowly from the recession.  That led me to think about other ideas of what might hold back the recovery.  One thing that's sometimes said is that measures which make wages less "flexible" make it harder to rebound from a recession.  This argument relies on the basic economic principle that if the price of something becomes lower, people will buy more of it.  So if wages decline during a recession, employers will buy (hire) more.  If they don't, that's good for people who still have jobs, but employers won't hire, and unemployment will remain high.  A paper by Juan Botero et al.  compiled measures of the strength of employment protection laws, collective bargaining laws, and social security measures in different countries.

Employment protection includes things like regulation of work hours and laws limiting employers' ability to lay off workers.  Collective bargaining laws protect workers' right to unionize and encourage or require employers to negotiate with unions.  "Social security" includes unemployment insurance and benefits for retirement, disability, and sickness.  The measures are available for 30 of the 33 OECD countries (all except Estonia, Iceland, and Luxembourg).  The data are from about 2000, but things like that usually don't change rapidly, so they're probably still pretty accurate for the recession.

If you regress economic growth from 2009-11 on these factors plus log GDP and stimulus spending, you get:

In terms of the combination of policies that's associated with faster recovery (high stimulus spending, low employment regulation), South Korea ranks at the top, followed by Austria, Canada, and the United States.  At the other extreme is Portugal, followed by Hungary, and Greece.

Posted by David Weakliem at 9:03 PM No comments:

A recent survey that's been getting some attention asks people whether they have a more favorable opinion of Congress or various widely disliked things.  Congress ranks behind many of them--cockroaches seem to be getting the most publicity.  On looking at the complete list, I noticed one that seemed out of place--France.  France did get more approval than Congress (46%-37%), but the margin wasn't impressive:  traffic jams got more approval by 56%-34%.  Do Americans really dislike France that much? 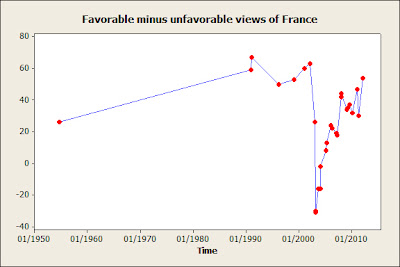 Favorable opinions have consistently outnumbered unfavorable ones, except in 2003-4.  That stretch of unpopularity was presumably the result of France's opposition to the Iraq war, but apparently most of us have forgiven them.  The latest survey (Feb 2012) had 75% favorable and 21% unfavorable, which is somewhat below the favorability ratings in the 1990s, but still pretty good.

I would try to figure out a way to reconcile the results, but  the survey on Congress was an automated one (press 1 for .... ), and as I've said before, I suspect that people don't take automated surveys very seriously.   I hope they don't--otherwise we have to conclude that Americans are pretty fond of lice, which beat Congress by 67%-19%.
Posted by David Weakliem at 6:41 PM No comments:

Is Inequality Holding back the Recovery?

In the New York Times, Joseph Stiglitz says "Inequality is Holding Back the Recovery,"  but Paul Krugman is skeptical and says there no reason to expect that inequality will affect short-term economic growth.  Using data from the Organisation for Economic Cooperation and Development, here is the relationship between inequality (the Gini coefficient) as of about 2005 and economic growth between 2009 and 2011--that is, since the bottom of the recession. 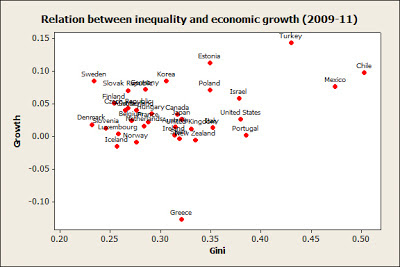 It looks like the more unequal countries have recovered more rapidly.  But most of the countries that combine strong growth and high inequality are also poor (relative to the OECD nations as a whole), so they have more room to grow.  As I said in an earlier post, the amount of stimulus (government spending growth) in 2005-7 also seems to have affected economic growth in 2009-11.  If you use all three of these factors to predict growth, you get

Of course, that's not proof that inequality makes no difference:  the confidence interval (range of plausible values) is large enough to include pretty substantial effects, both negative and positive.  But there's no sign that countries with more inequality have had a slower recovery from the recessions.   So this evidence comes down on Krugman's side.

Notes:  "Wealth" is the logarithm of per-capita GDP, as of 2009.  For "stimulus," see my earlier post on the subject.  Greece is an outlier on economic growth, but it doesn't make much difference to the results, since it's pretty much average in terms of the three predictors.


Posted by David Weakliem at 4:34 PM No comments:

Posted by David Weakliem at 6:14 PM No comments:

Labor Shares Around the World

A few weeks ago, Paul Krugman noted that the share of compensation in national income has declined over the last 40 years or so.  That is, labor (broadly defined as everyone who gets a wage or salary) is relatively getting less and capital is getting relatively more.   Thomas Edsall also wrote about the issue last week.  I wondered whether this was happening in other countries too.  Here are figures on labor share based on OECD data from 1975 until recently (between 2009 and 2011 depending on the country).

The "Trend" is the average change per year in that country.  For example, in the US, the average annual change is 0.1%, which means 3.5%-4% over 35 to 40 years.  The trend is negative in every nation, but its size varies greatly, and the decline in the United States is relatively small compared to other countries.  Looking at it another way, in 1975 the labor share in the US was eighth out of nine countries (just ahead of Canada); in the latest year the US ranked fifth.


PS:  I limited this to countries that were relatively affluent by world standards at the beginning of the period.  Labor share seems to fluctuate more from year to year in small countries, so I included only a few:  Canada and Australia because they are culturally similar, and Sweden because sociologists always like to compare the US and Sweden.

Posted by David Weakliem at 10:39 AM No comments:

In the late 1980s, a survey of people in seven nations (France, Italy, Japan, the US, Great Britain, the Netherlands, and West Germany) asked people to choose between two statements about what happens "when the state provides for families whose income is insufficient":  (1) "It enables them to live" or (2)  "It takes away their sense of responsibility."  It also asked a more unusual question, about Aesop's fable of the grasshopper and the ant, and asked how the ant should have responded when the grasshopper asked for help:  "the ant sends the grasshopper away because It is only natural that the grasshopper should suffer now" or "The ant first admonishes the grasshopper, saying, 'You are to blame for having been lazy. You should work harder from now on,' and than shares his food.  The results, summarized as percent giving the "generous" versus the "hard-hearted" answer:

So there is some evidence that people in nations with attitudes that are more favorable to the welfare state are less generous in a personal sense.  I've heard arguments that this is the case on a personal level--in effect, that liberals want the government (ie other people) to take care of the needy so they don't have to do it themselves--although I haven't seen any real evidence. The information here is at the national level, not the individual level, but it suggests that support for the welfare state isn't the same as generosity or soft-heartedness.
Posted by David Weakliem at 5:07 PM No comments:

In 1952, a survey on "Religion and the American People" asked "Do you think that young people today have as strong a sense of right and wrong as they did, say, fifty years ago?"  The question was asked again in a 1965 Gallup survey.  Then there was a long gap before it was asked again, but it was repeated in several surveys (by various firms) between 1998 and 2005.  The results: