Education and taste in reading

In the early days of survey research, there weren't nearly as many surveys as there are today, but they were more likely to venture outside the usual range of topics.  For example, in 1948 a Roper/Fortune survey focused on "cultural interests."  One question gave people a card with a list of possible plots for a novel or story and asked "if you were going to spend this evening reading, which would you select--assuming that they all would be well-written?"  It also asked whether there were any that "you'd rather not read about at all?"

The plots were:
1.  "A stuffy banker is outwitted in an amusing way by a group of farmers"
2.  "A plain girl to whom no one had paid much attention in her home town goes to Washington,  becomes a great social success, and marries a brilliant young Senator."
3.  "An amateur detective solves an unusually puzzling murder."
4. "A soldier returns to find that his wife has been blinded in an air raid."
5. "The adventures of a little-known sea captain who had a great influence on the outcome of the American Revolution."
6.  "The problems of a man who can't make decisions because he always had been tied to his mother's apron strings."
7.  "The wife of a European diplomat runs away with an American businessman."
8.  "Two high school sweethearts drift apart but finally realize they have loved each other all along and are married."

It seemed to me that 4, 6, and 7 were the plots that were most compatible with "literary" fiction, since they didn't involve a clear happy ending or solution.  Therefore, I expected that they would be less popular overall, but that education would increase the taste for them.  The actual rankings by popularity are:

I regressed each person's ratings of each story on five characteristics, education, economic level (as estimated by the interviewer, age, and dummy variables for black and female:

Back in July, I had a couple of posts on gun control.  Unfortunately, recent events brought the issue back to mind.  Since 1980, the Gallup Poll has asked the following question (with minor variations):  "Do you think there should or should not be a law that would ban the possession of handguns except by the police and other authorized persons?"  Between 1959 and 1979, they asked the same question about "pistols and revolvers."  Here is a figure showing changes over the whole period: 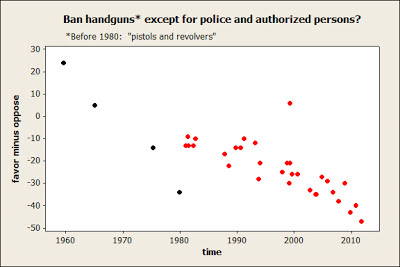 There has been a large decline in support for a handgun ban over the period.  Looking more closely, support seems to have fallen rapidly in the 1960s and 1970s (although the question was asked only a few times, so it's hard to be sure), then more slowly until about 2000, and the more rapidly again.   The sustained decline in support supports Ross Douthat's claim, mentioned in my earlier post, that it reflects a more general shift in values.  I'm not convinced by his idea of "individualism" as the source, but I don't have a good alternative at the moment.
Posted by David Weakliem at 4:27 PM No comments:

The Evils of Europe

During this election, there seemed to be a lot of talk about the danger that Barack Obama was going to turn America into Europe. I recall hearing similar things said about Democratic candidates in previous elections, but I don't think it was nearly as common. That doesn't sound like such a terrible fate to me, but I'm not a typical voter. What do most people think about life in Western Europe? There haven't been many questions on the subject, but back in 1990 a survey sponsored by Parents Magazine asked which scored the highest in various areas of life, the United States, Japan, or "major Western European countries such as Britain, France, Germany, or Italy." The results, arranged by size of America's lead on Europe (questions slightly abbreviated):

A recent survey by Public Policy Polling asked "Do you think that Barack Obama legitimately won the Presidential election this year, or do you think that ACORN stole it for him?"  Only 35% of the respondents who voted for Romney said that he won it legitimately--59% said that ACORN stole it and 16% didn't know.  In December 2004, a Gallup/CNN/USA Today Poll asked "Which comes closer to your view of this year's (2004) presidential election--(George W.) Bush won fair and square, or Bush only won because of vote fraud or other illegal means?"  60% of Democrats said he won "fair and square," while 34% said that he won because of fraud.

So it seems like Democrats were more willing to accept defeat in 2004 than Republicans were this year (although even 34% is a lot).  The questions aren't quite the same, but they seem pretty comparable.   The bigger problem is that PPP is an automated survey, where the questions are recorded and people answer by pushing buttons on the phone.  I don't know of any research about differences in answers between automated surveys and conventional surveys with a human interviewer, but I suspect that people may take the automated survey less seriously and be more likely to pick "outrageous" options.  Response rates are also lower, although it's not clear what effect that would have.  Hopefully one of the conventional survey firms will ask something on this topic.

PS:  I once looked for similar questions after the 1960 election, when there were many claims of fraud.  But there weren't any, which says something in itself.
Posted by David Weakliem at 10:44 PM No comments:

About a week ago the New York Times had a story on taxes which said that over the last 20 years, the percentage of people who thought high-income people paid too little income tax had fallen, while the percentage who thought low-income people paid too little had risen.  That seemed like a surprisingly big change, so I checked the source (the Gallup Poll).

The figure shows the percent who say taxes for the given group are too high minus the percent who say they are too low.  The changes are almost mirror images of each other, so you can combine the two sets of numbers into one--differences between opinions about the tax burden of the rich and the poor.  The Gallup Poll also asked about "middle-income people" and "you."  Those figures tracked each other closely, so they can also be combined into one.   The result is two numbers, one representing views about the tax burden of the average person and the other representing views about the relative burdens of the rich and poor.

Here are the averages for four periods:

The changes in opinion through 2008 can plausibly be exchanged by actual changes in tax rates--Clinton increased them and made the system more progressive, while Bush cut them.  There haven't been major changes in tax rates under Obama, so my guess is that views about the gap between rich and poor have changed in response to political discourse--in the last few years, many Republican leaders have made a point of  saying that low income people pay too little and high income people pay too much, so ordinary people who support the party followed along.  The puzzle is why the Bush tax cuts didn't have any discernible impact on opinions about the tax burden on people with high income.

Posted by David Weakliem at 8:43 PM No comments: