Almost everyone who's paid attention to the issue believes that inequality has been increasing in the last few decades:  specifically, a small minority at the top has been pulling ahead of everyone else.  In the New York Times today, Thomas Edsall wrote about a new study that says almost everyone is wrong:  between 1989 and 2007, household income grew by about 13% for the bottom quintile, about 6% for the middle quintile, and declined for the top 5%.  That is, the poor are getting richer and the rich are getting poorer.  Edsall gave a quotation from the authors of the study (Richard Burkhauser, Jeff Larrimore, and Philip Armour) giving a few examples to illustrate their calculations:


Posted by David Weakliem at 6:23 PM No comments:

Since 1987, a number of surveys (mostly by Pew) have asked people whether they agree or disagree that "When something is run by the government, it is usually inefficient and wasteful." Here is a figure of the average response (4=strongly agree .... 1=strongly disagree). 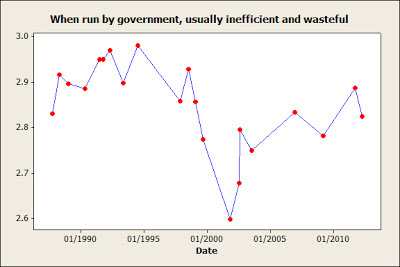 The lowest levels of agreement were in November 2001 and July 2002.  I assume that those are part of the general tendency to rally around American institutions that occurred after Sept 11, 2001.  Apart from that, there's not a lot of change.

However, closer examination suggests a tendency for agreement to decline:  in a regression including a variable for the wake of September 11 and a time trend, the coefficient on the time trend has a t-ratio of -2.78 (controlling for autocorrelation, it's -2.25 or -2.36).  This really surprised me for two reasons.  First, I thought that conflict involving the President and Congress would lead to more negative views of "government" in general.  Second, although anti-government sentiments were strong in the Republican party in the late 1980s, they seem to have become much stronger since then.  As a rough index, Grover Norquist was mentioned only twice in the New York Times through the end of 1994, and over 1,000 times since then.      As a result, I expected views of "government" to become more negative at least among Republicans.  Maybe answers to this questions are affected more by routine dealings with government agencies, which probably have become more positive over the period (see my post on the Postal Service).
Posted by David Weakliem at 6:48 PM No comments:

Since 1990, the General Social Survey has asked "What do you think the chances are these days that a white person won't get a job or promotion while an equally or less qualified black person gets one instead? Is this very likely, somewhat likely, or not very likely to happen these days?"  Although the GSS evaluates proposed questions carefully, they missed a problem of interpretation here:  people can evaluate the hiring of "equally" and "less" qualified blacks very differently.  A person who believes in that hiring should be according to merit would believe that if two people are equally qualified the choice should be made at random, or on a first-come-first-served basis.  That is, if some equally qualified blacks are getting chosen over whites, that's justice; if less qualified blacks are chosen over whites, that's injustice.

However, I think that people focused on the "less qualified" part:  the GSS had some questions about why blacks generally earned less than whites, and people who said that the "equally or less qualified black person" was likely to get a job were more likely to say it was because of lack of will power or inborn ability and less likely to say it was because of discrimination.  So this question can be taken as a measure of "resentment":  belief that blacks are getting unfair advantages.  (Logically, someone might say that a less qualified black person is likely to get a job and that's a good thing--that is, they might accept the "classic" argument for affirmative action and think we have a lot of it--but it seems safe to say that's a minority position). 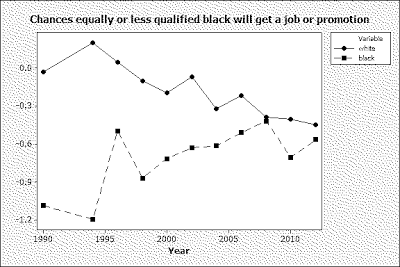 The figure shows the trends in opinions for whites and blacks:  higher numbers on the vertical axis mean that people on the average think it's more likely.  Whites have moved pretty steadily away from thinking that it's likely (except maybe between 1990 and 1994).  Blacks have become more inclined to think that it's likely.  As a result, the differences in opinions between blacks and whites have almost disappeared.  So this question suggests a clear decline in "racial resentment" over the last 20-25 years.
Posted by David Weakliem at 10:03 PM No comments:

Socrates vs. a fool

Most research on subjective happiness has found that education doesn't make any difference once you control for income.  That is, if you compare two people with the same income but different amounts of education, there's no tendency for the one with more education to be any more (or less) happy than the one with less education.

Of course, you can follow John Stuart Mill and say that more educated people are better off in some sense even if they aren't happier ("better to be Socrates dissatisfied than a fool satisfied." )  But there's also a question of how best to measure subjective happiness or satisfaction.  A few surveys have included a series of questions about whether you've felt various emotions in the last few weeks, specifically:

1. Particularly excited or interested in something
2. So restless that you couldn't sit long in a chair
3. Proud because someone complimented you on something you had done
4. Very lonely or remote from other people
5. Pleased about having accomplished something
6. Bored
7. On top of the world
8. Depressed or very unhappy
9. That things were going your way
10. Upset because someone criticized you

The even-numbered ones are generally regarded as bad and the odd ones as good.  I regressed reports about each of these on income and education (data from the US sample of the 1990 World Values survey).  Here are the results:  I give them so that a positive sign always means a favorable effect (more likely to report feeling a good emotion or less likely to report feeling a bad one), and standardize the coefficients for income and education so that they can be directly compared.

For anyone who wants to calculate statistical significance, the standard errors are about .030.  In general, these results show that education has a positive effect on experienced emotions.  The estimates are larger than those for income (and highly significant) for two:  particularly excited or interested in something, and pleases about having accomplished something.  There are some negative estimates, and while none are statistically significant, a couple are large enough to be of potential interest:  bored and lonely.   The contrasting effects for bored and "excited or interested" aren't necessarily contradictory:  more educated people might be able to get more deeply engaged in things, but also more likely to become bored when in a situation which doesn't present many opportunities.
Posted by David Weakliem at 6:55 PM No comments:

First I Look at the Purse

The Gallup poll used to have a fair number of questions on issues of everyday life.    In 1950, they asked "If you were a young man and looking for a bride, which would YOU prefer--a young girl who is very pretty or a young girl who is not pretty but has a lot of money?"  29% said the pretty one, 23% said the one with money, and 43% were classed as "don't know."  They recorded what people in that category said in their answers, and I would characterize them as "other" rather than "don't know":  some people said it should be about love, others named various other personal qualities (there was also one wise guy who said "ugly and no money").

Compared to whites, blacks were more likely to prefer the girl with money:

That may be because blacks were poorer than whites, and money seemed more important to poor people.  Unfortunately, the Gallup Poll didn't ask about income, but there were no strong differences by education.  It also asked about occupation, but the coding was complicated, so I didn't take the time to check.

Women were somewhat less likely to say they would choose the pretty one and more likely to choose "other".  But I was a bit surprised at how small the differences were:

Age made a difference, shifting concern from looks to "other":

There also may have been some differences by vote in the 1948 presidential election.  There wasn't much difference among non-voters and supporters of the two major candidates, but of the 22 who said they had voted for one of the minor party candidates (Henry Wallace and Strom Thurmond), only 2 (9%) said the pretty girl and  10 (45%) said the girl with money.  That could be just a fluke, but it is statistically significant and interesting to speculate about.


Posted by David Weakliem at 5:55 PM No comments:

Last February, a CBS/New York Times survey asked people if the policies proposed by several candidates for the Republican nomination "favor the rich, favor the middle class, favor the poor, or do they treat all groups equally?"  They asked the same thing about the "policies of the Obama administration."  Between 10% (Obama) and 27% (Santorum) of people said that they didn't know.  Leaving them aside and giving the percentages of those with an opinion, we get:

If you combine these into two measures:  Rich minus middle class and poor minus "all equally", the perceived positions of the candidates can be shown in this figure: 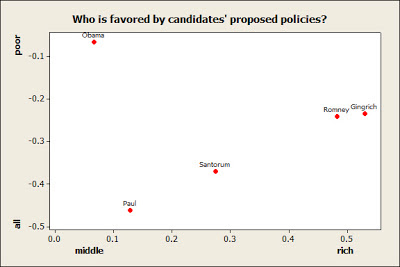 The differences among the candidates don't fall into a single dimension:  Obama and Paul are close on the horizontal (middle class vs. rich) scale, but at opposite ends of the vertical (poor vs. all equally).  Romney and Gingrich are at the extremes of the horizontal, but near the middle of the vertical one.  In principle, it would seem like being seen as favoring the middle class or all equally would both be appealing to most voters, and favoring the rich would be a clear negative.   That is, the most desirable position would be the lower left, where Ron Paul was.  That raises the question of whether their really is a lot of potential support for Ron Paul's policies, or whether people were giving him the benefit of the doubt because they didn't know much about him:  in effect, voters assume that a candidate will treat all groups equally until he proves otherwise.

Posted by David Weakliem at 6:52 PM No comments: