Since 2000, several surveys have asked "overall, would you describe the views and polices of the Democratic/Republican party as too extreme, or as generally mainstream."  The results:

The "overall" is the percent seeing the party as mainstream minus the percentage seeing it as extreme, so the higher the score the better.  The perception of both parties as "too extreme" has increased, but the timing has been different.  The perception of Republicans was pretty steady through September 2010, but between 2010 and 2012 there was a big shift towards seeing them as extreme.   There was a shift towards seeing the Democrats as more extreme between 2000 and 2004, and another shift between 2004 and 2010.

What do they know?

The other day, Paul Krugman referred to a poll from 2009 that found 39% of Americans thought that the government should "stay out of Medicare" (citing this source).  The link to the original release is broken, although the information may still be present somewhere on the site of Public Policy Polling, which did the survey.  However, there was a survey from 2003 sponsored by the Kaiser Family Foundation and the Harvard School of Public Health which asked:   "To the best of your knowledge, is Medicare primarily a federal government program, a state government program, or a private insurance program?"  74% said federal, 16% state, 2% private and 7% didn't know.  Republicans were no more likely to say that it was private (and were somewhat more likely to know that it's a federal program).  Education was the biggest influence, although even among people with less than a high school diploma, only 4% thought it was private and 16% didn't know.

So this question (which was also asked in 1995 and 2000 with similar results) suggests that almost everyone knows that Medicare is a government program.  As far as the PPP poll, my guess is that most of the people who said the government should "stay out" meant something along the lines of "don't change anything."
Posted by David Weakliem at 5:06 PM No comments:

Which is to blame if a person is poor?

Since 1964, a number of surveys have asked “In your opinion, which is generally more often to blame if a person is poor: lack of effort on his own part or circumstances beyond his control?” (Since the 1980s, most have substituted "their" or "his or her" for "his").  The graph shows the difference between the percent saying "effort" and the percent saying "circumstances."  For example, the first time it was asked (February 1964), 34% said effort and 29% said circumstances, for a difference of +5%.  (Most of the others volunteered the opinion that it was some of both).  There are some short term changes--the most striking one is a strong move towards "circumstances" between 1988 and 1992 and a strong move back to "lack of effort" in 1994.  However, there is also a long-term trend towards "circumstances."  If you do a regression on time, the t-ratio is highly significant (3.62) and it remains significant even if you remove the outliers.  Many people believe that Americans have become more conservative on economic issues since the 1970s; others (including me) believe that they've stayed about the same.  From either point of view, the shift is surprising. 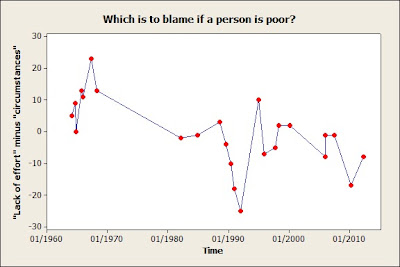 Posted by David Weakliem at 4:53 PM No comments:

One of the more unpopular aspects of "Obamacare" has been its requirement that people buy health care insurance.  I always assumed that, even among people who fervently support the right to go without health coverage, few want to exercise that right.   But I've never seen any estimates of the number of voluntary uninsured, so I used the 2009 Behavioral Risk Factors Surveillance System data to explore the issue.  I defined a group who (a) rated their health as excellent or very good, (b) earned at least $35,000 per year and (c) said "no" when asked if there was "a time in the past 12 months when you needed to see a doctor but could not because of cost."  These are people who presumably don't have substantial regular health care costs and have the resources to pay for the care that they need.

In the BRFSS sample, about 10% are uninsured and 10% of the uninsured have this combination of characteristics.  So the "potentially voluntary" uninsured make up about 1% of the total population.  Who are they?  Compared to the rest of the population, they are more likely to be self-employed, younger, male, and single.  These patterns aren't surprising.  But they are also more likely to be unemployed (10.7% were unemployed compared to 5.6% among everyone else).  They were also quite a bit more likely to have children under 18 (43% vs. 28%). Putting these together, it seems that at least half of this 1% would like to have health insurance but can't afford it.
Posted by David Weakliem at 6:05 PM 2 comments:

A few days ago, the New York Times had a piece by Seth Stephens-Davidowitz, who has a PhD in economics and is now an intern at Google.  He looked at searches involving "depression" that Google's algorithms classified as "health related," and found some clear patterns.  They were more common in winter months and in colder places.  They also varied within the week, being most common on Monday and least common on the weekends.

The Behavioral Risk Factors Surveillance System, a very large telephone survey, asks "in general, how satisfied are you with your life."  The great majority of people say that they are either "very satisfied" or "satisfied" but it seems reasonable to interpret "dissatisfied" or "very dissatisfied" as representing something similar to what the average Google user would mean by "depression."  I used the 2009 data, because I happened to be working with it for another purpose.

The differences by month in the percent saying they are dissatisfied or very dissatisfied are not statistically significant at conventional levels (P=.082) even though the BRFSS sample about 400,000 cases.  But for what it's worth, it's highest in August (6.26%) and lowest in December (5.66%).  There are significant differences by day:  dissatisfaction is lowest on Monday (5.7%) and highest on Friday (6.4%), which is pretty much the opposite of the Google pattern.

In short, the patterns in the BRFSS are totally different from those found in the Google searches.  I haven't taught research methods in several years, but textbooks always used to warn students that a very big sample was not necessarily a representative sample.  The favorite example was the 1936 Literary Digest survey, with millions of respondents, which predicted that Alfred Landon would win a solid victory over FDR.  The Google searches are essentially Literary Digest type data:  they represent a lot of "volunteers," not anything designed to produce a representative sample.  I wouldn't dismiss the Google results--if searches for  "depression" are more common in winter or on Mondays, that means something.  But the straightforward interpretation that Stephens-Davidowitz offers--people feel worse in winter and on Mondays--isn't borne out by the data from a random sample.
Posted by David Weakliem at 5:48 PM No comments:

In 1979 and 1992, Roper surveys asked people if they thought various statements about millionaires were "generally true or generally untrue."  The statements ranked from most to least agreement (in 1992):

>They use their wealth mostly to protect their own positions in society
>They favor the Republicans over the Democrats
>They don't pay their fair share of taxes
>They are politically conservative
>Their investments create jobs and help provide prosperity
>Their spending gives employment to a lot of people
*They make illegal contributions to political campaigns
*They contribute generously to charitable causes
*They worked hard to earn the wealth they have
*They got where they are by exploiting other people
They play too much and work too little
They feel a responsibility to society because of the wealth they have
They are responsible for many of society's ills
They keep the common man from having his proper share of the wealth
They really live no differently from most people, except that they have more money

People are pretty positive about the economic contributions of millionaires (most people say that they provide prosperity and give employment, and most disagree that they keep the common man from getting his share).  Opinions on their personal qualities and social contributions are more mixed:  for example, the numbers agreeing that they worked hard to earn their wealth and that they got where they are by exploiting others are almost equal.

In a future post, I'll consider changes in these opinions between 1979 and 1992.
Posted by David Weakliem at 5:37 PM No comments:

During the 1970s and early 1980s, many sociologists argued that inflation couldn't be fully explained by factors such as the money supply or the Phillips Curve:  that "sociological" factors like power and norms were involved (see this book for a once well-known example, this post for another example).  This view didn't make much headway with economists and after a while the sociologists lost interest and drifted away.  But recently Paul Krugman said "inflation ... is always associated with severe political and social disruption. To stand Milton Friedman on his head, high inflation is never and nowhere a merely monetary phenomenon."

Using the data discussed in my last post, you can rank different nations on their average rate of inflation, adjusting for the years for which data are available (as far back 1956 for some countries, at least to 1998 for all).

A couple of clear patterns emerge:  (1) nations with higher average rates of inflation are poorer than those with low rates.  Some of this may be a matter of high inflation holding down growth, but I'm confident that there would be a strong correlation with per-capita GDP at the beginning of the period (2) most of the nations with high average inflation experienced a transition (or at least a partial transition) from dictatorship to democracy.  You could probably think of a "pure" economic explanation for the first pattern, but the second one suggests that Krugman is right and that sociologists gave up too easily.
Posted by David Weakliem at 2:36 PM No comments: