The value of a stupid question

The survey I discussed in my last post also included this:  "Here is a question about the actor, Charlie Sheen. As you may know, he frequently has used the word 'winning' when talking about himself. Based on what you know about his recent behavior, would you say that Charlie Sheen has mostly been winning or mostly been losing in the past few weeks?"  This was not an issue of lasting importance--in fact, I've forgotten what he was doing except that he was generally thought to be making a fool of himself.   But if you compare people by self-described political views, there was a definite relationship:  12% of the people who said that they were very conservative or conservative thought that he'd been "winning," compared to 25% among people who said that they were "liberal" or "very liberal."  Also, the relationship was stronger among less educated people.   With nearly all political opinions, you get the opposite pattern:  the relationship to self-described ideology is much stronger among educated people.

This is one of the clearest pieces of evidence for a claim I've made several times:  for many less educated people, statements about whether they are liberal or conservative don't have much to do with their political views, and are more about lifestyle or general morals.  In effect, they may understand "liberal" as meaning something like "libertine."
Posted by David Weakliem at 9:50 PM No comments:

In the first presidential debate, Mitt Romney said he would eliminate federal funding for PBS.   President Obama and other Democrats have frequently reminded people of that, which suggests they think that it's an unpopular position.   A CNN/Opinion Research Corporation survey in 2011 gave people a list of ten programs, and asked if federal funding should be increased, kept the same, decreased a little, decreased a lot, or eliminated entirely.   If you give the options scores of 1 to 5, with 1 representing a spending increase and 5 representing elimination, the averages are:

So spending for public broadcasting is second from the bottom in terms of public priorities, finishing ahead of only "aid to foreign countries for international development and humanitarian assistance" (the survey included descriptions of most of the programs--I just give shortened labels).   So Mitt Romney was right to go after PBS, at least in a political sense.  The relative lack of support for public broadcasting probably doesn't represent anti-intellectualism, since education spending gets the most support.  My guess is that people see public broadcasting as less essential, or something that could be replaced by private contributions.

On the other hand, people aren't in favor of big cuts in any program--the mean is in favor of increasing spending for education, Medicaid, and Social Security and at keeping spending the same for Medicaid (which the survey describes as "the federal health program for the poor").  Even for foreign aid, the mean was in between kept the same and decreased a little.


Posted by David Weakliem at 7:52 PM No comments:

The red states, blue states, and the Civilizing Process

Steven Pinker, Professor of Psychology at Harvard, had a piece in the NY Times today entitled "Why Are States So Red and Blue?," in which he proposed that the tendencies of states to vote for Democrats or Republicans have deep roots in history:  "The North and coasts are extensions of Europe and continued the government-driven civilizing process that had been gathering momentum since the Middle Ages. The South and West preserved the culture of honor that emerged in the anarchic territories of the growing country, tempered by their own civilizing forces of churches, families and temperance."

Pinker makes some interesting points, but overlooks one basic one:  the identity of "red" and "blue" states has changed over time.  In fact, the correlation between Democratic share of the vote in the 1936 and 2008 presidential elections is -.46:  by and large, the states where the Democrats did best 1936 are the ones where they did worst in 2008.  Of course, this is misleading, because the South has shifted from Democratic to Republican, while remaining conservative.  But if we exclude the south, there is still a negative correlation (-.31).   The relationship is shown in the figure below:  the black dots are Southern states and the red dots are all other states.  There are several outliers even when you exclude the South--the two states in the upper left are Vermont and Maine, which were strongly Republican in the 1930s.  The four in the lower middle are Wyoming, Utah, Oklahoma, and Idaho, which were strongly Democratic in the 1930s.   If you exclude those cases, the correlation is still about zero.   Of course, the parties have changed too, but by today's standards, Roosevelt (D) was definitely the more liberal candidate in 1936.  So either the civilizing process was very slow in gathering momentum or we need another hypothesis. 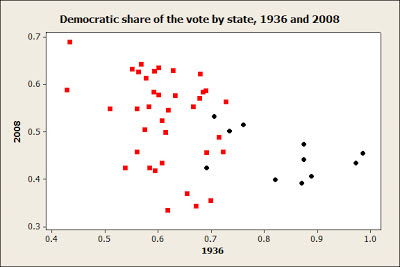 Posted by David Weakliem at 10:26 PM No comments:

There are a lot of formulas that predict the outcome of presidential elections from economic conditions.   One of the best, in my opinion, was devised by Ray Fair, an economist at Yale.  His equation has three economic variables:  growth of per-capita GDP in the first three quarters of the election year, change in prices over the last fifteen quarters, and number of quarters with strong economic growth (over 0.8%) over the last fifteen quarters.  There are also variables for incumbency and how long the party has been in office.

Fair has estimated the equation using election results for the whole country.  It occurred to me that it would probably be better to omit the south.  Until recently, voting in the south had very little to do with economic conditions--it was about race and religion--so including the South is basically just adding "noise."   While I was at it, I decided to break the US down into regions and see if they reacted the same way.  I divided states into Northeast, Midwest, Plains/Mountain, and Pacific.  The results, where the dependent variable is the incumbent party's share of the two-party vote:

The R-square (predictive power) increases substantially when the south is omitted.  The advantage of incumbency becomes larger, as does the advantage of having periods of strong growth.  Comparing the regions, there is an interesting pattern:  in the East and Midwest, the number of good quarters is more important, while in the Western and Pacific states, recent growth is more important.  Maybe westerners have a more short-term orientation?  That seems to fit with popular images of the differences between parts of the country. The regional differences (if they exist) are probably slightly beneficial to Obama--his record is OK in terms of recent growth, but very weak in terms of number of good quarters.  The Fair model for the US predicts a close race.  The regional differences suggest Obama will be a bit weaker than expected in the East, but stronger in the West, which includes more swing states--a few more votes in places like Colorado or New Mexico might make the difference.

Note:  My estimates for the US are a bit different from Fair's, since my dependent variable is vote by state and his is the vote for the whole US (in effect, the states are weighted by the number of voters).
Posted by David Weakliem at 11:22 PM No comments:

Meanings of liberalism and conservatism

Since the 1970s, self-described "conservatives" have outnumbered "liberals" by a substantial margin, often almost 2:1. That raises a number of questions, notably how the Democrats, as the more liberal party, manage to remain competitive. One possibility is that many people don't think of liberal and conservative in a political sense--when they say they're conservative, they're referring to lifestyle or religion rather than politics. Few surveys have asked questions that get at this issue, but back in 1981 the Gallup poll asked "People who are conservative in their religious views are referred to as being right of center and people who are liberal in their religious views are referred to as being left of center. Which one of these categories best describes your own religious position?" and followed with the same question about political views. The survey also had a number of questions on seven political issues: abortion, the death penalty, government spending on social programs. I divided people into two groups based on education (high school or less vs. some college or college graduate) and looked at how well you could predict what they said about their political views from political opinions and what they said about their religious views. I summarize this by giving the unique contribution to explained variance.
No college     College
Political Opinions       4.1%         10.8%
Religion                10.7%          9.9%

The total is bigger than the sum of the two contributions because there's some overlap between religious rating and opinions on political issues (religious conservatives have more conservative opinions on the political issues), and if you do the calculations, you see that the overlap is much bigger for college-educated people. Putting this together, what less educated people say about their political ideology doesn't have that much to do with "politics."
Posted by David Weakliem at 9:27 PM No comments:

In March 2010, a Pew survey asked "Would you favor or oppose allowing an American state to secede and become independent from the country if a majority of the people from that state wanted to do this?" About 25% were in favor.  People with favorable attitudes towards the Tea Party movement were more likely to be in favor.  Beyond that, however, there were some surprises.  Because the only serious attempt at secession was the Confederacy, you might expect opinions to differ by race and region, but they didn't.  People who said that they were "very conservative" were most likely to be in favor, but  the next most favorable group was people who said they were "very liberal" (moderates were least favorable).  Younger people were more likely to be in favor, and more educated people less likely.

Postscript to the white working class

In exploring the data discussed in my last post, I found one group that stood out:  people without a college degree who received a salary.   56% of them said they were Republicans, and only 29% said they were Democrats.  Other whites (ie either with a college degree or paid a wage, commission, or some other method) were almost evenly divided:   43% were Republicans and 42% were Democrats.

I'm not sure whether this would hold up in other data--the difference is statistically significant, but not so much as to remove all doubt.  But it is intriguing.
Posted by David Weakliem at 6:52 PM No comments: