The AP recently had a story in which they went to "the heart of Trump country," specifically Sandy Hook, Kentucky, "isolated in the foothills of the Appalachian Mountains."  Apparently a number of people said they were tired of hearing about the Trump voters in Appalachia mourning for the days when coal was king, according to this story by Philip Bump, and observed that plenty of Trump voters could be found in affluent suburbs.  I have made the same complaint myself in the past, but as Bump pointed out, in Elliott County (where Sandy Hook is), there was a large swing to Trump.   So if you're looking for people who were attracted to Trump, rather than people who just voted for him because he was a Republican, it's a defensible choice.

I looked more systematically, using these county-level election results for 2012 and 2016.  These were compiled by volunteers, so there may be some errors, but I checked some cases and they seemed good.  In 2012, the mean county-level Republican share of the vote was 59.8%, and in 2016 it rose to 63.5%.  This shows two things--that the Republicans tend to do better in the less populous counties, and that this tendency became stronger in 2016.  There are about 3,000 counties in the United States; here is the geographical distribution of the 100 with the biggest pro-Republican swing between 2012 and 2016:

Elliott County had the biggest swing.  The counties that moved towards Trump were overwhelmingly in the Midwest (broadly defined)--there were only a handful in the Northeast, none on the Pacific coast, and none from any Southern states except Tennessee and Virginia.  A significant number are in Appalachia, but most of them aren't.  I don't know anything about most of the counties on the list, so I can't offer any thoughts on what they have in common, but it seems like journalists looking for "Trump country" should broaden their focus--in particular, Iowa deserves attention.  The one thing I can say is that they mostly had small populations--the biggest was Schuylkill County, PA, whose biggest city is Pottsville (home of some of my ancestors).

I also calculated the counties with the biggest swing to the Democrats.  Their distribution:

A lot of large cities appeared on the list--Los Angeles, New York, San Diego, San Francisco, and Dallas counties, as well as Harris County (Houston), Fulton County (Atlanta), and King County (Seattle).  There were also some affluent suburban counties, like Fairfield (CT), Westchester (NY), Somerset and Morris (NJ), and Johnson (KS).  They were less geographically concentrated than the counties with the biggest Republican swings,  The shifts were also smaller--the biggest swing to the Democrats was in Parmer County (TX), where the Democratic share went from about 20% to about 30%.  There were about 350 counties in which the Republican share increased by more than 10%.*

The one clear thing is that the urban/rural split got bigger, and the urban swing to the Democrats was not just in "blue states."  An interesting question is what happened in Georgia--none of the nearby states had nearly as many counties that shifted to the Democrats.

PS: This is a convenient place to look at results for individual counties since 1920.

Posted by David Weakliem at 7:12 PM No comments:

My last post mentioned Trump's approval ratings among college graduates, but didn't show them.  Here they are, with a comparison to Obama at the same points in his presidency. 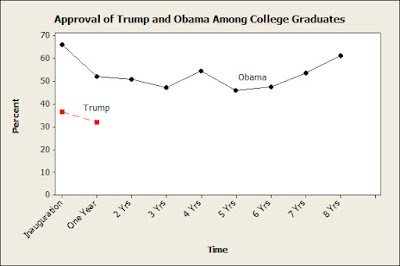 I mentioned "style" as a factor in relative approval in my last post, and one of the examples I was thinking of was Trump's blustering about how nations that voted against his policy in the UN had better not come asking for aid.  I haven't seen any polling results on this specifically, but I looked for parallels and found a question from 2001:  "Do you agree or disagree with the following statement? Countries that receive substantial military or economic aid from the United States should support U.S. positions when casting votes at the U.N."  The percent agreeing (of those who had an opinion), by education:

Or to put it another way, about 10% of people who didn't attend college disagreed, vs. over 30% of people with graduate education. This survey was taken only a week or two after 9/11, which may have affected the totals--a survey in the mid-1990s found only about 55% agreeing on a similar question.  But I doubt that the circumstances would have much effect on the educational difference.

.
Posted by David Weakliem at 8:09 PM No comments:

During the 2016 campaign, Donald Trump promised a large infrastructure program, major restrictions on international trade, and eliminating tax loopholes that benefited wealthy people.  As President, he's followed standard Republican economic policy--cut taxes and regulations on business and try to repeal the Affordable Care Act--and the "populist" elements have been pretty much forgotten.

Has the difference between promises and policies led to a change in the social composition of his support?  The Gallup Presidential Job Approval Center has more or less weekly data on presidential approval ratings broken down by various factors.  I calculated his average approval rates among people with and without a college degree in the first five surveys of his presidency (Jan-Feb) and the most recent five (Nov-Dec).  In the first five, his approval was 44.8% among people without a college degree and 36.6% among people with a college degree, for a difference of 8.2; in the last five, it was 38.4% and 32.0%, for a difference of 6.4.  That is, less educated people are still more likely to approve of Trump, although the gap may have closed a little.

I also looked at Obama's approval ratings among people with and without a college degree, using the first five surveys in his presidency, and then the last five in every year of his presidency (including 2009).  The results: 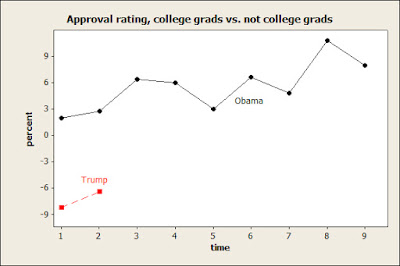 Obama's approval rating among more educated people relative to less educated people rose pretty steadily over his time in office.  At the beginning, he had only slightly higher approval ratings among college graduates (66% to 64%); by the end, it was a pretty large gap (61% to 53%).  It would be interesting to try to figure out the exact timing--was it a gradual shift or did it correspond to some events--but that would take more time than I can afford to spend on this.

This does not mean that Trump is more popular than Obama was among people without a college degree: 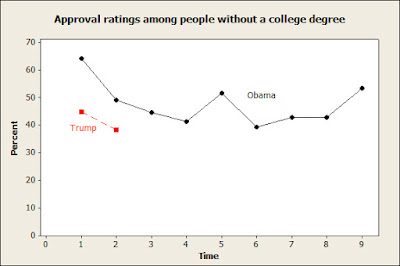 His approval ratings among this group, even at the beginning of his presidency, were somewhat below Obama's average.  The striking difference in approval ratings between Trump and Obama is among people with a college degree.

My tentative interpretation is that the differences in relative approval ratings are mostly about style rather than policy, or perceived policy.  More educated people are more likely to be concerned about standards of "presidential" behavior--less educated people may see violations of them as harmless or even as refreshing honesty. (See this post for a historical parallel)

Posted by David Weakliem at 3:33 PM No comments: 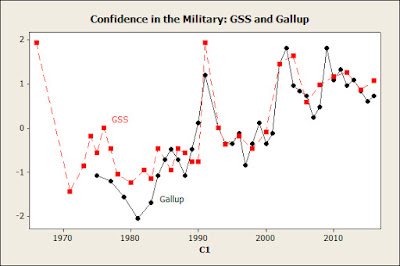 They track each other closely--the correlation is about 0.9.  There seems to be some discrepancy in the 1970s and early 1980s--confidence according the Gallup question (which just asks about the institution) is low relative to confidence according to the GSS question.  Or you could say that confidence in the military has increased somewhat more than confidence in "the people running" the military.  However, this is a secondary issue--basically, they are good substitutes for each other.  (Better than I expected--I thought people might make more distinction between the military and the people running the military).

What makes the comparison particularly interesting is the first two points labelled "GSS"--they aren't actually from the GSS, but from the Harris Poll, which introduced the question in 1966 and asked it again in 1971, before Gallup started their question.  There was a large drop in confidence in that five year period--after forty years of increase, we are not yet back to the 1966 level.  Vietnam is the obvious explanation for the drop, but Harris asked about a number of other institutions, and most of them also saw large declines in confidence.  Unfortunately the data from 1966 and 1971 do not seem to have survived, but I was able to find data from Harris Polls in 1967 and 1972 which included the confidence questions, and I will write about them in a future post.  Since the semester is finally over, the "future" might even be the near future.

Note:  the figures for the Harris data were obtained from Lipset and Schneider, The Confidence Gap, and an article by Everett Ladd in the 1976-7 issue of Public Opinion Quarterly.

Posted by David Weakliem at 12:11 PM No comments:

What about the wall?

What happened in those 10 years?  The most straightforward explanation is that building a wall went from an idea that didn't receive serious attention to the favorite policy of the Republican candidate for president, and something that all prominent Democrats condemned.  Blacks and Hispanics are overwhelming Democrats, so they followed their party (or reacted against the party they disliked).

PS:  I got the idea for this post when I read something that said Donald Trump was a "white nationalist" and mentioned the wall as one of the pieces of evidence for this.  I couldn't remember exactly where, but I did a search for the phrase in the New York Times and got the following results:


[Data from the Roper Center for Public Opinion Research]
Posted by David Weakliem at 6:56 PM No comments:

Andrew Gelman had a link to my post about declining confidence in institutions, so I will give an update.  First, since I was interested in trends, I just considered institutions for which there was twenty or more years of data.  "Small business" narrowly missed, and does qualify this year, so here it is (along with the military and the police, which have similar levels of approval): 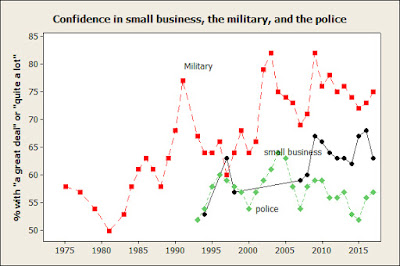 I think the 1994 figure is underestimated (or else everything else is overestimated), but even if you set them aside there seems to be an upward trend.  Next, here is the change from 2016 to 2017:

Eleven institutions improved, and only three declined.  Differences of about 5 or more are statistically significant.

Finally, a possible explanation of confidence in the military is that it rises and falls depending on success or failure.  That's probably a factor, but I don't think it's the whole story.  In 1993, a couple of years after the success of the first Gulf War, 67% had a great deal or quite a bit of confidence in the military.  In 2017, after long and inconclusive engagements in Iraq and Afghanistan, 75% did. I think that there has been a more general change, which Andrew Bacevich has talked about:  the military doesn't ask much of the general public, and in return we don't ask questions.

[Additional data from the Roper Center for Public Opinion Research]