America and the World

An article in the New York Times a few days ago said "a December Pew poll revealed the lowest level of public support for an active American foreign policy since 1964."  It didn't give an exact citation, but it looks like this is the source.  The exact item is agreement or disagreement with the following:   "The U.S. should mind its own business internationally and let other countries get along the best they can on their own." The summary is a little misleading:  it should say that he question was first asked in 1964 and 2013 was the highest level of agreement ever found (1964 was the lowest).

In searching for these data I came across another question on the same general issue that has been asked as far back as 1946, originally by Gallup and later by several other organizations: "Do you think it would be best for the future of this country if we take an active part in world affairs, or if we stay out of world affairs?" Answers are summarized in the following figure: 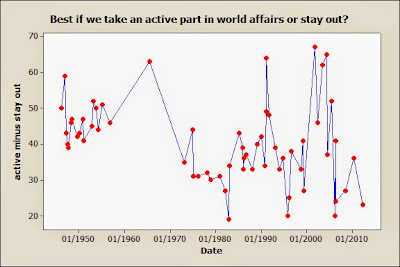 The basic pattern seems to be that support for an active role was higher in the 1950s and 1960s and has been at a lower level since then.  It has bounced back a few times:  in 1991, when the Soviet Union was starting to break up, and for several years after 9/11.  The Pew question suggests more of a real trend away from support for international involvement in the last 10 year or so--this question has ups and downs without much pattern.  It seems to me that the questions are asking pretty much the same thing, but maybe people interpret them differently.  Or maybe it's related to the exact times that each question was asked.

Perhaps it's because with most of the high-paying occupations that they asked about, there is an obvious zero-sum element: people figure that if they made less, prices or taxes could be lower, or ordinary workers in their companies would get paid better. But investment bankers don't directly sell anything to the public, so people don't see who would gain if they got paid less. If this is correct, it may help to explain why the rise in top incomes over the last few decades hasn't caused much public reaction. High salaries in finance, which has contributed a lot to the rise in inequality, just seem to appear, rather than to be gained at anyone's expense.

In the New York Times, Arthur Brooks says:  "The 2006 World Values Survey, for example, found that Americans are only a third as likely as British or French people to feel strongly that 'hard work doesn’t generally bring success; it’s more a matter of luck and connections.' This faith that success flows from effort has built America’s reputation as a remarkably unenvious society."

There are a couple of problems with this statement.  First, it's misleading.  The item he refers to asks people for their position on a 10-point scale with "In the long run, hard work usually brings a better life" at one end and the statement Brooks quoted at the other.  It's true that the British and French respondents were three times as likely as Americans to take the "luck and connections" extreme, but that's 6% to Americans' 2%.  Americans are more towards the "hard work usually brings a better life" end, but rank only 15th out of 54 countries.  The countries that most strongly believe in hard work are neither economic powerhouses nor liberal democracies:  the top four are Egypt, Ghana, Trinidad and Tobago, and Iran.  So the United States is not "remarkable" in terms of opinions on this question, but that's probably a good thing.

None of the comparative surveys that I know of have a question that could plausibly be regarded as a direct measure of envy.  However, the International Social Survey Programme included two questions that, taken together, seem to get at it.  One is "do you think people with high incomes should pay a larger share of their income in taxes than those with low incomes, the same share, or a smaller share?"  The other asks about the statement "The government should provide a decent standard of living for the unemployed," with answers of "strongly agree," "agree," "disagree," and "strongly disagree."  My thought is that envy is represented the combination of agreement that people with higher incomes should pay higher tax rates and disagreement that the government should provide a decent standard of living for the unemployed:  that is, wanting to make the rich worse off but not caring about making the poor better off.  While this isn't totally watertight, I think it's a good first approximation. 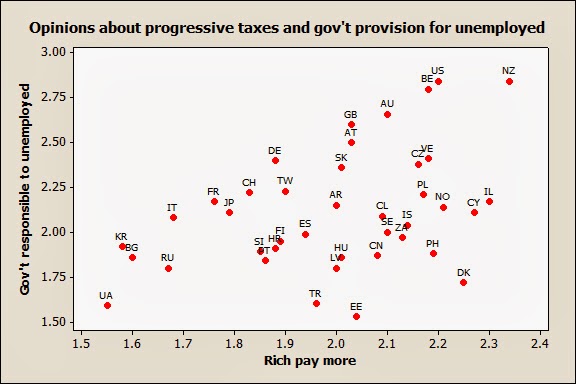 Those are the countries that could reasonably be called "unenvious":  people think that there should be help for the unemployed, but that the responsibility to pay for that should be spread widely.  The honors go to Denmark, Estonia, the Philippines, Cyprus, and Israel.
Posted by David Weakliem at 8:33 PM No comments:

Envy and other deadly sins

Writing in the New York Times recently, Arthur Brooks says that calls for the redistribution of income are motivated by envy.  I hope to have a more serious post on this idea in the near future, but in honor of Lent I'll write about a 2012 survey sponsored by CBS News, 60 Minutes, and Vanity Fair that asked "Which ONE of the seven deadly sins do you feel the most susceptible to- Lust, Gluttony, Greed, Sloth, Wrath, Envy, or Pride?"  Pride was the "winner," with 36%, followed by gluttony at 15%, lust (11%), Envy (10%), Greed (7%), Sloth (6%), and wrath (4%).  11% said don't know or didn't answer--I don't know if that's because they didn't think they were susceptible to any or because they couldn't decide among the contenders.  There was little or no association between answers to this question and vote in the 2008 election or views of the Tea Party.  However, there was an association with self-rated political views.  The pattern differed depending on whether you used the sampling weights, so I'll just mention the differences that showed up both ways:  Liberals were more likely to say they were prone to gluttony, people who rated themselves as either very liberal or very conservative were less prone to envy,  and people were rated themselves as very conservative were more prone to pride.
Posted by David Weakliem at 6:31 PM 1 comment:

A few days ago, the New York Times had a story which said "In the news media and in popular culture, the notion persists that millennials ... are growing up in a colorblind society in which interracial friendships and marriages are commonplace and racism is largely a relic."  Then the story quoted a number of people: all of them agreed that America wasn't a colorblind society, but most suggested that they were challenging the conventional wisdom by saying that.

The survey also asks about a number of other groups.  The rankings of perceived discrimination against each, counting "a great deal" as 4, "some" as 3, "only a little" as 2, and "none at all" as 1:


Posted by David Weakliem at 4:18 PM No comments: