College professors and capitalism in the 1950s

In 1955, the Opinion Research Corporation ran a survey they called "Free Market versus Socialist Thinking," which was about basic economic issues.  I've written about it before, but until recently I hadn't noticed that it included special samples of a number of occupations:  Catholic clergy, Protestant clergy, college professors, high school teachers, business executives, other teachers, and manufacturing foremen.  They didn't give any details on how those samples were selected, but for what it's worth, here is the distribution of party identification for each group:

The differences from the general pubic are statistically significant for the three groups marked with asterisks.

Today, college professors are far to the left of the general public.  I'm interested in figuring out how long this tendency has existed, so here are comparisons between the professor sample and the general sample on some other questions.

DO YOU THINK IT WOULD BE A GOOD THING FOR THE COUNTRY IF THE GOVERNMENT PUT A TOP LIMIT ON THE SALARY ANY MAN COULD MAKE?

DO YOU THINK IT IS THE RESPONSIBILITY OF THE FEDERAL
GOVERNMENT TO SEE THAT EVERYONE WHO IS WILLING AND ABLE TO
WORK HAS A JOB?

DO YOU THINK THE FEDERAL INCOME TAX SHOULD BE CHANGED TO
MAKE THE RATE STIFFER ON PEOPLE WITH BIG INCOMES, OR NOT
SO STIFF?

Professors were to the right of the general public on economic issues, although they may have been more likely to identify as Democrats.  I suspect they were to left on "social issues" like opposition to McCarthyism and racial segregation, although the survey didn't contain any questions on them.

In many ways, Donald Trump is unique in American politics, but as I've mentioned before, I think he has some parallels with Ross Perot.  Below the presidential level, I wondered about Jesse Ventura, who was elected governor of Minnestota as an independent in 1998.  Ventura had more political experience than Trump--he'd served one term as mayor of a city of about 85,000.  He also apparently had libertarian leanings, while Trump has mostly been a standard conservative since being nominated.  Still, it seems that for both of them, a basic part of their image was that they were outsiders who would apply toughness and common sense.

Minnesota has a state poll, sponsored by the Minneapolis Star Tribune, that goes back many years.  I combined results from two asked in the second half of October 1998 to get breakdowns by education and gender:

The differences by education and gender are similar to those found with Trump today.

Some contemporary analyses hold that the big difference by education in support for Trump and Clinton reflects long-term economic change--less educated people, especially men, are losing out from globalization.   I don't know about Minnesota in particular, but the economic situation in the late 1990s was generally regarded as good, so the example of Ventura counts against this analysis.  An alternative is that less educated people (maybe especially less educated men) are more attracted to tough-talking outsiders and less likely to be bothered by "gaffes" or outrageous statements.  That would suggest that large educational and gender gaps are specific to this election rather than a sign of things to come.

[Data from the Roper Center for Public Opinion Research]
Posted by David Weakliem at 9:24 PM No comments:

Now that's what I call a gender gap

The gender breakdowns in responses to two recent survey questions:

The gender gaps are about equal to, or maybe somewhat bigger than, those found in the latest surveys of voting intentions in the Trump-Clinton race.  So what were these questions?

I'm not surprised that men gave more support to abolishing the penny--if I'd been asked before, looking at the results, I think I would have given odds of 3:1 or 4:1 that the difference would be in that direction--but why would the gap be so large?

[Data from the Roper Center for Public Opinion Research]
Posted by David Weakliem at 3:26 PM No comments:

What (probably) never was

I wasn't planning to post again this soon, but this morning I read a review of The Populist Explosion (John P. Judis) in the NY Times Book Review.  The reviewer (Jonathan Alter) said "In 1968, Wallace, running as a third-party candidate, led the Democratic nominee, Hubert Humphrey, in the polls until October...."  I was surprised to read that, so I checked the Roper Center's iPOLL database for all surveys asking about choice among Nixon, Humphrey, and Wallace in 1968.  The results: 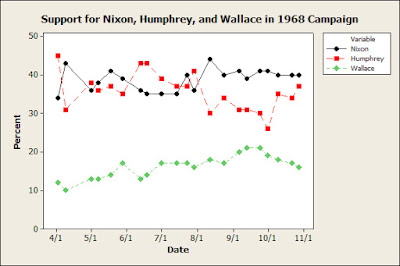 Wallace was always behind Humphrey.  The smallest gap was in a poll taken at the end of September and beginning of October, when Humphrey had 26% and Wallace 19%, with Nixon at 41%.  The iPOLL database is not completely comprehensive, so maybe there were surveys in which Wallace led.  But I doubt it, given the substantial margin and general stability of the figures (which were from two different polling firms, Gallup and Harris).  Maybe Alter was thinking of 1992, when I think Perot did actually lead in some polls?

I hadn't realized that Humphrey was generally leading in the polls until August.  The Republican convention took place at the beginning of that month and the Democratic convention took place at the end.  That connects to another issue that I was going to write about, so I might as well do it now.  Back in the primaries, I was thinking about the question of whether nominating an "extreme" candidate would make a difference.  People who say that an extreme candidate will lose votes always include George McGovern as a leading example.  McGovern definitely had a liberal voting record in the senate, but so did some more successful Democratic nominees (John Kerry and Barack Obama).
That led me to wonder if the relevant issue might be a divided convention, rather than "extremism."  The two things tend to go together, because the reason for a divided convention is often an ideological challenge where one or both sides feel strongly enough to fight on until the end.  By divided, I mean one in which there was open conflict that was visible to the TV audience.    I think that the following conventions are generally agreed to meet that standard:  Republicans in 1964 and 1976 (and now 2016), and the Democrats in 1968, 1972, and 1980.  You could argue that the whole idea of a divided vs. united convention doesn't apply before the TV era--the action took place behind the scenes, and multiple ballots were common.  However, the Democratic convention of 1924, which took over 100 ballots and involved a giant rally by the KKK after a motion to condemn them had been narrowly defeated, might deserve to be included.

I added a variable for a divided convention to Fair's model and got the following results:

The third model modifies Fair's variables in two ways:  Gerald Ford is counted as an incumbent president, and the Democrats are counted as getting 34.8% of the two-party vote in 1924, which is what they actually got.  Fair does not count Ford as an incumbent on the grounds that he was not elected to either the presidency or the vice-presidency, which doesn't make sense to me.  There was an important third-party candidate (Robert LaFollette) in 1924, and Fair estimates that most of his voters would have gone to the Democrats if he had not been in the race.  That could be true, but it's not possible to be sure, and if you were adjusting totals it seems that a better case could be made for 1968, when surveys indicated that most of Wallace's voters would have gone to Nixon as a second choice.

The figures mean that a divided Democratic convention is estimated to cost the Democrats about 2.4% and a divided Republican convention to help them by 2.4% (in model 1).  There's a good deal of uncertainty about the size of the effect, and it's not statistically significant at the 5% level in the first two models.  Still, I'd say that there's evidence that a divided convention hurts a party.
Posted by David Weakliem at 5:57 PM No comments:

Suppose that the major-party nominees for president had been nondescript, people like Mike Pence or Tim Kaine.  In that case, it seems that the outcome would depend on "how things are going"--if they're going well, keep a Democrat in office; if not, turn to the Republican. There have been a number of efforts to figure out exactly which "things" matter and how much difference they make.  One of the best-known ones was proposed by Ray Fair in 1978 and has been modified and updated since then.  In Fair's formula, support for the incumbent party depends (positively) on the rate of growth of per-capita GDP in the first three quarters of the election year and the number of quarters of rapid growth over the president's term and (negatively) on the rate of change in prices over president's term.  Of course, we don't know what those will be yet (currently the GDP data only goes through the first quarter of 2016), but if you put in his predictions of what those will be, the equation predicts the Republican would get 56% of the two-party vote.  Even if you assume very strong (4%) growth in the second and third quarters, that only brings the Republican share down to 52.7%.

So according to his formula, the objective conditions put the Democrats at a big disadvantage.  Why?  Part of the reason is that there have been few quarters of rapid GDP growth over the last term--as many people have pointed out, the economic recovery has been slow.  But that was also true in 2012, when the formula predicted that Barack Obama would win the popular vote.  The main reason for the difference is that the formula also includes variables for incumbency and for the duration of time the party has been in power.  Incumbency is estimated to increase vote share by 3.0%, and being in power eight years rather than four is estimated to reduce it by 3.8%.  Putting those together, the Democratic candidate in 2016 starts off 6.8% worse than Barack Obama did in 2012, and 7.6% worse than Obama did in 2008 (when duration was counting against the Republicans), before accounting for economic conditions.  These are big differences, both in absolute and relative terms (bigger than the difference that would result from a -5% rate of growth compared to a +5%).

When I checked earlier today, the Republican share of the two-party vote in the latest polls was about 47.5.  If that holds up, it will be the largest prediction error in the period covered by the estimates--the current record is 1992, when George HW Bush was predicted to get 53.6% of the two-party vote, but actually received only 48.3%.


Posted by David Weakliem at 8:40 PM No comments: