I had a post earlier this month on a question about whether people can get ahead by hard work.  What I originally intended to write about was another question that was contained in one of the surveys:  "Do you think that there is too much power in the hands of a few rich people and large corporations in the United States, or don't you think so?"   That question had previously been asked (with "rich men" instead of "rich people") in a Gallup Poll from April 1941.   A comparison:

It seems possible that in 1941 the war* had created a sense of national unity (or shifted the focus to ethnic rather than economic divisions), so 60% may have been lower than if the question had been asked a few years before.  Still, the shift towards the "cynical" answer is substantial.  I wanted to break opinions down by social class, but the two measures in 1941 (occupation and interviewer's estimate of "economic standing") were not in the 2011 survey, and the two in 2011 (income and education) were not in the 1941 survey.   So I couldn't do much with the question, but the marginals are still of interest.

*Of course, the United States didn't declare war until December, but people already saw Germany and Japan as threats.

[Data from the Roper Center for Public Opinion Research]
Posted by David Weakliem at 12:07 PM No comments:

A few weeks ago, the Pew Research Center released a survey that found only about 16% thought that being married was essential in order for someone to lead a fulfilling life, while over 50% thought that "having a job or career they enjoy" was necessary.  I learned about this from a newsletter written by David French, who interpreted it as evidence of "workism"--people putting work at the center of their lives.  I had a different interpretation:   that most people regard marriage as a matter of individual choice, not an obligation--if someone doesn't get married, that's their business--but do regard work as an obligation.   Large majorities disapprove of "able-bodied" people getting public assistance, and although I haven't seen any survey questions, I suspect that many people would disapprove of someone who inherited enough money to live on and never looked for a job. So the frequency of "job or career" as an answer was because the question asked what was "essential," rather than what was most important to them, or even what they thought was most important to most other people.

I've had a couple of posts suggesting that work is less central to people   than it used to be, but neither had data after 2001.  I looked a bit more, and was unable to find anything more recent, but did find a survey from 1999 that asked "what aspect of your life is most fulfilling or satisfying?"  They grouped  the answers into fourteen categories, which I reduced to six plus "don't know."  The overall distribution:


Family was by far the most popular choice.  College graduates were a little less likely to say family (49%) and more likely to say work (12%) or social life (12%).    People aged 18-29 and 65+ were somewhat less likely to say family, presumably because they were less likely to be married or have minor children, but they were more likely to say social life--work was below 10% in all age grops.  I looked at a number of other group differences, and the lowest percent picking family was 34% among blacks (who were relatively high in religion and "other"), and the highest for work was 14% among divorced people.  As of 1999, family was far ahead of work as a source of fulfillment.  That was 20 years ago, but the lack of strong age or educational differences suggests it probably hasn't changed much.


Posted by David Weakliem at 3:19 PM No comments:

In 1992, a survey asked people to choose which statement came closer to the way they felt:  "A--Most people who want to get ahead can make it if they're willing to work hard. Or, B--Hard work and determination are no guarantee of success for most people."  Since then, the question has been repeated in a number of surveys, mostly by the Pew Research Center.  The percent choosing statement A: 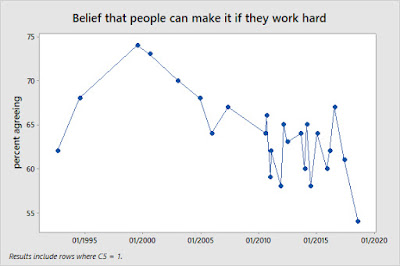 There seems to be an increase from 1992 until about 1999, although there are only a few surveys, and there is clearly a decline since then.  I've had a number of posts saying that people aren't especially discontented today (this is one), but they were about people's own lives.  These results suggest that people have less confidence in "the system."

What difference do these feelings make for politics?  I compared the surveys from August 2000 and August 2016.  The August 2000 survey asked people how they would vote "if the election were held today."  The 2016 survey didn't ask that, but asked people if they "would consider voting for" or "would definitely not vote for" Hillary Clinton and Donald Trump.  I combined those questions, with consider voting for A and definitely not vote for B taken as equivalent to saying that you would vote for A if the election were held today.  The results:

In both years, the people who took the "optimistic" position were more likely to vote Republican, but the gap was considerably smaller in 2016.  That is, Trump appealed more to people who thought "the system was rigged" than GW Bush had (or Hillary Clinton appealed less than Al Gore had, although general knowledge of the two campaigns suggests that more of the difference was on the Republican side).

[Data from the Roper Center for Public Opinion Research]
Posted by David Weakliem at 8:13 PM No comments:

Liking what they saw

I was looking for polls on Trump's popularity early in his campaign, and found several by the Monmouth Poll that reported the figures for Republicans separately (including leaners).  The figure shows the percent favorable minus the percent unfavorable: 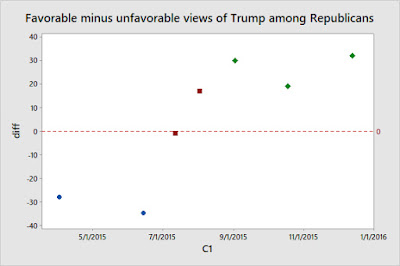 The first two (blue dots) were before his official announcement; the next two (red) after his announcement but before the debates; the last three (green) after the first debate.  I didn't expect to see much change:  I thought he had come into the race with a pretty strong base of support and maintained it.  But in fact, opinions were mostly negative before he announced (20 percent favorable and 55 percent unfavorable on June 14, 2015), and then became favorable (59 favorable and 29 unfavorable by September 2).

What led to the change?  The timing suggests that the very early days of his campaign were the decisive period.  I don't have time for a detailed examination, but I looked at the text of his announcement speech.  Some points that struck me:
1.  There was very little discussion of "culture war" issues:  nothing about abortion, same-sex marriage, political correctness, the mistreatment of Christians, the condescension of cultural elites......  The only thing I noticed was a call to "Protect the Second Amendment."
2.  There was nothing that seemed to be an appeal to "white nationalism," even in the broad sense of declining relative numbers and power.  Of course, there was the passage that is most remembered today, about how immigrants from Mexico are "bringing drugs.  They're bringing crime.  They're rapists."  But this was framed as a criticism of foreign governments--"when Mexico sends its people, they're not sending their best."
3.  There was a lot about economics, mostly standard stuff about the dangers of deficits and the evils of Obamacare.  There was a promise of rebuilding infrastructure, but the implication was that it could be done without more taxes or spending, because he was a businessman who could do things efficiently.
4.  The idea that America was being "beaten" in competition with other nations was a big theme.  "When was the last time anybody saw us beating, let's say, China in a trade deal? They kill us. I beat China all the time. All the time.
When did we beat Japan at anything? ...  They beat us all the time. When do we beat Mexico at the border?  They laugh at us all the time, at our stupidity.  And now they are beating us economically. The U. S. has become a dumping ground for everyone else's problems. [This was followed by the passage about the people Mexico was "sending"]." As this passage suggests, his major explanation for this state of affairs was the "stupidity" of American leaders.  A secondary one was that the leaders were beholden to donors, and he wouldn't be, because he was rich and didn't need their money.

So I would say #3 reassured Republicans, and  #4 added a new thing that other candidates weren't emphasizing, but fit with a view that is popular among the public, especially Republicans.

Posted by David Weakliem at 9:36 PM No comments:

Since the 1930s, the Gallup poll has asked people if they would vote for certain kinds of people for president:  specifically, "If your party nominated a generally well-qualified person for president who happened to be [type], would you vote for that person?"  In June 2015 and April 2019, they asked about hypothetical candidates who were black, Catholic, Jewish, a Muslim, gay or lesbian, a woman, an evangelical Christian, and a socialist.  The table below shows the change in the percent of Democrats, Republicans, and independents who say they would vote for the candidate.

For the first group (evangelical, Jewish, Catholic, Hispanic, Black, woman, gay), there is no clear evidence of partisan difference in the changes (of course, there is sampling error, especially for independents, who are the smallest group).  By and large, tolerance has increased--a total of 16 positive changes, three negative, and two no change.

For the other three, there has been polarization--Democrats are more likely to say they would vote for the person, Republicans less likely.  Socialist is different from the others in principle--it's a political position, not an ethnic or religious group.  Presumably the difference is because socialism has become more prominent after the strong showing of Bernie Sanders in the 2016 Democratic primary and the high profile of Alexandria Ocasio-Cortez.

In the contemporary United States there is a pretty strong norm of saying that you don't pay attention to race, color, or creed.  Even Donald Trump has made some effort to appeal to (or at least say he doesn't have any animosity towards) groups like blacks, Latinos, and gays and lesbians.  However, there is always an implicit restriction to groups that are inside a circle of those that are accepted as parts of American society.  I think the partisan divergence for atheists and Muslims shows that they haven't made it in that circle.  In contrast, although you might expect that the support given to Trump by many prominent evangelical leaders might cause a reaction among Democrats, willingness to support an evangelical Christian has increased among Democrats as well as Republicans (and Independents).