Paul Krugman has several blog posts and a column about the negotiations between the European Union and Greece.  He argues that the demands for more austerity are misguided--that Greece has already done everything that could reasonably be done, and more.   But at least some of the people commenting on his posts disagree--they say that although Greece has cut government spending, there hasn't been much "structural reform."  That is, Greece still has a lot of unnecessary business regulations that hold back production and waste resources--if it got rid of those, the economy would expand and it could pay its debts.

The World Bank has been keeping track of business regulations in different countries since 2004 in its Doing Business project.  By this ranking, Greece was 109th out of 189 in 2010, and 61st in 2015.  That's still the lowest rank among the EU countries, but Greece is closing in on Italy (56th in 2015) and,  ironically,  Luxembourg (59th).  Greece had one of the biggest upward moves in that period (Russia and Poland were among the others).  The lesson seems to be that although cutting business regulations may promote economic growth in the long run, it doesn't have much immediate effect--if it did, Greece would be one of Europe's success stories.


PS:  A high "Doing Business" ranking doesn't necessarily mean small government--Denmark and Norway are in the top 10.
Posted by David Weakliem at 7:46 PM No comments:

In the wake of the racially motivated murders in Charleston, there's been a lot of discussion of change or lack of change in racial attitudes.  The conventional view is that that straightforward racial prejudice among whites is steadily declining.   For example, in recent surveys over 90% of whites say that they would vote for a black candidate for president.  But some people argue that if you go just a little deeper, you find that attitudes aren't really changing.  For example, Charles Blow says "we must never be lulled into a false belief that racism is dying off with older people," and refers to a study that found that younger whites were no less likely to rate blacks as less intelligent or hard-working than whites.

Since I've accepted the conventional view, and taught it in my classes, I thought I should check this out.  The research Blow mentioned is based on the 2012 American National Election Study.  I checked, and there is no relation between age and opinions about relative intelligence or hard work.  However, the ANES doesn't seem to have asked the question in previous years, so there's no direct information about change (I say "seem" because the ANES is a large and complex series of surveys, and I'm only moderately familiar with them, so I may have missed something).  But the General Social Survey has asked the questions pretty regularly since 1990.  Specifically, they ask people to rate how intelligent [hard-working] various groups are on a scale of 1-7, and you can compute the difference between the ratings for whites and blacks.   Here is a figure showing average opinions among whites concerning intelligence: zero means that blacks and whites are rated as equally intelligent, and positive numbers mean whites are rated as more intelligent. 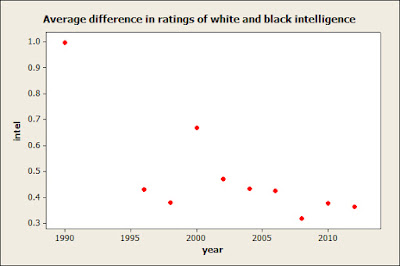 There is a definite decline over the period.  You could argue that all of the decline was between 1990 and 1996 and there's been no change since then.  But if you look at the percent of people who rate blacks and whites the same, there's been a steady increase--39% in 1990, 59% in 1996, 69% in 2012.  So these results support the conventional view--they also show that younger generations are less likely to think there is a difference, suggesting that the trend can be expected to continue.

The difference between the ANES and GSS patterns is puzzling, but the evidence of a downward trend in racial prejudice is still strong.


Posted by David Weakliem at 9:07 PM No comments:

My previous post discussed two surveys that asked how much tax someone with an income of $1,000,000 would pay.  The average, among people who gave an answer, was a little more than 50% 1947 and a little less than 25% in 1998.  (There's some uncertainty because both surveys recorded answers as ranges, not exact figures).  How accurate were these perceptions?  According to a study prepared for the Congressional Research Service, in 1947 taxpayers in the top 0.1% of incomes paid an average of about 45% and those in the top 0.01% paid an average of 55% in federal income taxes; in 1998 they were both a little less than 30%.  So although there was a lot of individual variation, the average perception was pretty close to reality in both years.
Posted by David Weakliem at 12:55 PM No comments:

Since 2010, there have been a couple of surveys about how much people with high incomes should pay.  One was "What maximum percentage do you think...individuals and families with incomes between two hundred and fifty thousand and a million dollars should pay each year in income taxes?"  The median was 21-25%.  Another asked "About what percentage of income should someone making a million dollars a year pay in taxes--including federal, state and local taxes?" The median for that was 26-30%.

A 2012 CNN/ORC survey showed support for higher tax rates:  "Would you favor or oppose a proposal to change the federal income tax rates so that people who make more than one million dollars a year will pay at least 30 percent of their income in taxes?" found 72% in favor and a Gallup Poll found 60% in favor for a similar question.

I believe that people in the top income category currently pay a bit more than 30% on the average (according to the IRS).  That is, they pay more than what most people think they do.  I don't know if there's an estimate for 1947--I don't have time to check now, but I'll try to find something later.  I expect that it was higher today, because taxes on top incomes had been raised during the Second World War.

PS:  With inflation, a million dollars in 1947 was worth about 16 million in 1998.  So it's possible that explains some of the differences--that people believe that rates are steeply progressive beyond some point--although I doubt it.  I think at both times most people reacted to a million a year as just meaning "rich."

Posted by David Weakliem at 9:00 AM No comments:

Ross Douthat had a column in the NY Times in which he noted that, according to Gallup polls, acceptance of polygamy had doubled in the last 15 years and speculated that it would continue to grow.  His idea is that "the now-ascendant model of marriage . . . offers no compelling grounds for limiting the number of people who might wish to marry."  That is, if you accept the argument "if two people want to get married, why should it matter if they are of the same sex?" then it's hard not to accept "if a number of people want to get married, why should it matter if the number is more than two?"  An alternative idea, which he alludes to in a blog post, is that acceptance of polygamy comes from a religious autonomy/anti-government philosophy.


The Gallup release doesn't include breakdowns by group, but in 2008, a USA/Today Gallup poll asked about same-sex marriage and polygamy in the following format:  "please say whether you think [1] The decision to marry should strictly be a private decision between the two people who want to marry, or [2] The government has the right to pass laws to prohibit or allow such marriages."
This was part of a list including marriages between people of different religions, different races, and one or both partners under age 16.  Almost everyone chose option 1 for religion and race.  The question about people under 16 is different in principle--Douthat refers to the "now-ascendant model" as "adult autonomy"--so I'll leave it aside (about 80% chose option 2).

About 61% chose "private decision" for same sex marriage, and 28% for polygamy.  The questions are somewhat different from the ones that Douthat referred to, which asked about whether things are "morally acceptable," but I'd say they're equally relevant to the general issue.   If you think about them, the alternatives don't make much sense:  someone who says that same-sex marriages should be recognized by law is implicitly saying that the government has a right to pass laws on marriage. However, most people probably just interpreted the question as "should be allowed" vs. "should not be allowed."

By several things that could be regarded as indicators of liberalism--self rated ideology, views of Pat Robertson, how they would vote in a hypothetical election between Obama and McCain, more liberal people were more likely to regard polygamy as a private decision.  People who viewed same sex marriage as a private decision were also more likely to regard polygamy that way.  So so far it was going that way that Douthat's analysis would predict.

[Data from the Roper Center for Public Opinion Research]
Posted by David Weakliem at 4:47 PM No comments: