The future of the family

Since 1974, there have been a number of questions asking whether people are optimistic, pessimistic, or uncertain about the future of "the institution of marriage and the family."  The results

When did everyone start liking Hillary Clinton?

Recently a lot of people have been talking about Hillary Clinton in very flattering terms.  Writing in the Wall Street Journal, Patrick Caddell and Douglas Schoen say she is "the only leader capable of uniting the country around a bipartisan economic and foreign policy," and urge Barack Obama to "take the moral high ground" and step aside so she can be the Democratic nominee in 2012.  In the New York Times, Bill Keller thinks that Obama can stay in the top spot, but should make Hillary Clinton his running mate.  After all, she has "a Calvinist work ethic, the stamina of an Olympian, an E.Q. to match her I.Q., and the political instincts of a Clinton" and can bring a "missing warmth" to the campaign.

This seemed strange to me--as I remember, Hillary used to be regarded pretty much like Obama is today:  unquestionably smart, but not very good at connecting with ordinary people.  I don't remember anyone praising her "E.Q." when she led the attempt at health care reform.   Of course, that's just my memory, so I looked for more systematic data.  There have been many questions asking if people had a favorable or unfavorable view of Hillary Clinton, dating back to when Bill was seeking the 1992 Democratic nomination.  In fact, there were so many that I selected only a fraction of them to limit the amount of typing I had to do.  This figure shows the percent with a favorable view minus the percent with an unfavorable view.  For example, in the very first survey to ask about her (February 1992), 26% were favorable and 9% unfavorable, for a +17. 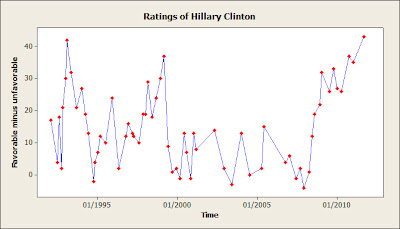 There were three periods when she was very popular--the beginning of the Clinton administration, for most of 1998 and the beginning of 1999, and since the middle of 2008.  In other times, favorable ratings were only slightly more common than unfavorable.  Her first period of popularity was presumably part of the general "honeymoon effect" for a new administration.  The second coincided with the effort to impeach Bill Clinton, when people presumably sympathized with her and thought she handled the situation with class.  The third seems to have started when she conceded the race for the Democratic nomination:  she went from +1 in April 2008 to +12 in June 2008.  Her ratings have kept climbing, and September 2011 was her highest ever (+43).  Maybe it's relatively easy to be popular as Secretary of State, as long as there are no policy disasters--a lot of the job is representing American interests and speaking up for American values.
Posted by David Weakliem at 5:40 PM No comments:

A recent New York Times story noted that perceived conflict between the rich and poor has increased since 2009.  Although it said that "traditionally, class has been less a part of the American political debate than it has been in Europe,"  it didn't mention that the question it talks about has also been asked in a number of other countries as part of the International Social Survey Programme.  Actually, the ISSP includes four questions about conflict:  poor people vs. rich people, working class vs. middle class, management vs. workers, and people at the bottom vs. people at the top.  In principle, people might distinguish between these types of conflicts, but in practice they tend to rate them all the same way:  if you think there's a lot of conflict between rich and poor, you probably think there's a lot between management and workers.  If you add the scores together to get a general measure of conflict and take the average for each nation, here are the rankings in 1999 (the last time the questions were included in the ISSP),  from most to least perceived conflict.

By this measure, the United States ranks pretty high in perceived class conflict, sixth out of twenty-four. Britain, which is often seen as a class-bound society, is several spots behind. The Contentious French (in Charles Tilly's phrase) rank below average. In fact, there are so many surprises that it's hard to see any pattern.
Posted by David Weakliem at 6:15 PM No comments:

Who thinks Republicans are liberal?

As I mentioned last time, many people seem to have incorrect or idiosyncratic understandings of "liberal" and "conservative."  A December 2007 USA Today/Gallup Poll asked people to rate the leading Democratic and Republican candidates.  The original data for this survey are available, so it is possible to see who got things "wrong."  First, the average ratings of the candidates, which are on a scale of 1-5, with higher meaning more liberal.


Mike Huckabee   2.27
Fred Thompson   2.35
Mitt Romney     2.39
John McCain     2.51
Rudy Giuliani   2.76
John Edwards    3.47
Barack Obama    3.59
Hillary Clinton 3.74
There are no major surprises here--there's a clear separation between the Democratic and Republican candidates, and the ratings within each party are reasonable too.  However, these are averages--the individual ratings for each candidate covered the whole range.  I divided people into three groups--those who rated the top three Republican candidates (Giuliani, McCain, and Huckabee) as, on the average, more conservative than the three Democrats; those who rated them as more liberal; and those who rated them as exactly the same.  (I just used three Republicans to reduce the number of people who had to be excluded because they didn't rate all of the candidates used).  So one group got the rough placement right, as conventionally defined, and the other two didn't.


So a significant group of people seem to be working on the following principles:  they like the Democrats, they hear that it's good to be conservative and bad to be liberal, so they conclude the Democrats are more conservative.  Although they definitely a minority, there are enough of them so that they might make up a major part of the shift in self-identification.  That is, we've gone from 35-40% of people calling themselves liberals to 20-25%, or a drop of about 15%.  That's close to the size of the "backwards" group.
Posted by David Weakliem at 4:50 PM No comments:


I was starting to write a post on this paradox when my attention was diverted by some survey questions from a Gallup/USA Today poll taken in December 2011: “How would you describe the political views of [name]--as very conservative, conservative, moderate, liberal, or very liberal?” They asked this about Barack Obama, the major candidates for the Republican nomination for President, and the respondent. For example, 58% thought Michele Bachmann was conservative or very conservative, 10% thought she was moderate, and 10% thought she was liberal or very liberal (the other 22% said they didn't know). It may seem strange that anyone thought she was a liberal, but studies have found that quite a few people seem to have no idea or an idiosyncratic idea of what these terms mean. If you call a conservative rating +1, a liberal rating -1, and a moderate rating 0, you can compute an overall score for perceived ideological position (among those who gave a rating). In her case, it's (58-10)/(58+10+10)=.62. The scores, from most conservative to most liberal:
Bachmann  .62
Perry     .50
Gingrich  .49
Santorum  .48
Romney    .38
Paul      .35
Huntsman  .29
You       .24
Obama    -.44
The relative ratings of the presidential candidates match up pretty well to the way that most "experts" would place them, except for Ron Paul, who comes in as the second most moderate Republican. Of course, Paul has an unusual combination of positions, and some people who call him a “liberal” may mean “libertartian.” Another noteworthy point is that people rate themselves as closer to all of the Republican candidates than to Obama.
Another way to look at this is by the ratio of (Conservative+Liberal)/Moderate. The ratios:
Bachmann    7.56
Gingrich    4.00
Obama       3.13
Paul        2.94
Santorum    2.81
Romney      1.97
You         1.65
Huntsman    1.39
By this measure, Paul is in the middle of the pack. That is, he doesn't rank unusually low in the number of “moderate” ratings. This is also surprising, since I don't think any expert would call him a moderate. It's possible that people are essentially taking an average—if he's liberal on some things and conservative on others, that comes out to moderate. But if that's the case, it's surprising that some people who recognized that he represented an unusual mix didn't volunteer an opinion like “neither one” or “some of both.” Or maybe some did, but the survey organization pressed them to pick one of the standard categories or dumped them into the “don't knows.”
Posted by David Weakliem at 4:52 PM No comments:

More on plummeting support for redistribution 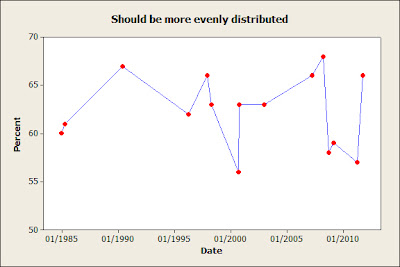 There's not a lot of variation, but there are some ups and downs.  The most dramatic decline was from 68% favoring a more even distribution in April 2008 to 58% in October 2008 (just as we went from a mild recession to a severe one).  It stayed low in surveys taken in March 2009 and April 2011.  So by this measure, support for redistribution really did plummet (or at least decline) during the recession.  But then it bounced back to 66% in October 2011.  I haven't done any analysis, but looking until 2008, it seems like there was a tendency for the percent favoring a more even distribution to go up when times were hard and down when times were good.  But what happened after 2008 doesn't fit that at all.
Posted by David Weakliem at 9:34 PM No comments: