The beginning of ideology

I have had several posts (this is the latest) trying to explain why American conservatism became ideological, but wasn't satisfied with any of them.  I identified several factors that might facilitate that developmetn, like a sense of being embattled as education and the media came to be dominated by liberals, but no primary impetus. Now I think I've found one, suggested by Irving Kristol in his Neoconservatism:  The Autobiography of An Idea (with an assist from Samuel Huntington, American Politics:  The Promise of Disharmony).  It is "the fact, noted by all historians and observers, that the United States is a 'creedal' nation" (Kristol, p. 376).  That creed has canonical texts (the Constitution and Declaration of Independence), which means that there's a possibility of "fundamentalist" movements that say we need to go back to those texts in order to find the answers to our problems.  Of course, liberals can do that too, especially with the Bill of Rights, but it's hard to deny that the founders saw only a small role for government, especially the federal government.  So after the appearance of social welfare programs and the rise of the "administrative state," appeals to the Constitution had a better fit with conservatism.  This was what led American conservatism to become ideological--it wasn't just an appeal to "tradition," which can mean many different things, but to to specific ideas expressed in specific documents.

Although I think Kristol had the right answer, he had the wrong question.  He thought that the exceptional feature of American conservatism was that it was populist.  There is a strong populist tradition in America, but populist conservatism is different from ideological conservatism.  Kristol held that the people had an instinct to do the right thing (as he saw it):   "today [1995] populist opinion--as every poll shows--is more concerned about cutting the federal deficit than about lowering taxes, which as come as a great surprise to many [traditional] conservatives, who learned in their 'political science' classes that 'the people' always want to be pandered to" (p. 384).  In reality, popular opinion reliably favors low taxes and "don't tread on me" rhetoric, but also programs like Social Security and "reasonable" regulation of business.

The division between the populist and ideological stands of conservatism explains the collapse of the "repeal and replace" effort.  The populist position would be to keep the parts that imposed burdens on large employers and insurance companies, but drop those that imposed burdens on ordinary people--taxes and the individual mandate.  The proposed act was a compromise between the populist position and the generic conservative inclination to scale things back and cut costs, so it was unacceptable to people who were serious about getting the government out of health care.  But a program that really got the government out of health care would be totally unacceptable to the public, so that meant that there was nothing that could get the votes to pass.

Posted by David Weakliem at 9:27 PM No comments:

I did some further investigation into the relationship between interest in politics and happiness and found that the GSS included another question on interest in politics in 1987:  "How interested are you in politics and national affairs?"  If you take the four samples with interest and happiness variables (1987, 1990, 1996, and 2014) and control for income, education, age, gender, race, and marital status, more political interest is associated with more happiness:  the t-ratio is 3.3 and the estimated effect of increasing interest from the lowest to highest level is about the same as the estimated effect of increasing income by a factor of 4.*

However, the piece by Arthur Brooks that I discussed in my last post seemed to be talking about the effects of excessive interest in politics--"hitting your twitter feed fifty times a day."  So maybe it's a non-linear relationship, with moderately interested people happier than people at the extremes?  No--it's pretty much linear in the combined sample.

I proposed that the relationship differed in 2014 than in 1990 and 1996.  On looking closely, it seemed to be the position of people who said they were "very interested" that changed.  More precisely, here are estimates of where the "very interested" are relative to the linear trend (positive numbers mean happier than predicted):

Given the standard errors, it's not possible to be confident about whether there were any differences among 1987, 1990, and 1996, but 2014 is almost certainly different from at least 1990 and 1996.  It seems reasonable that people who are highly interested in politics will be affected by how things are going in politics, so I think this supports the interpretation in my previous post:  the relationship depends on the nature of politics at the time.  Or if you want it in the form of eternal wisdom, attaching yourself to external things can bring either happiness or misery, depending on the quality of those external things.

*Brooks also controlled for self-rated political ideology.  I'm not sure that you should, so I left it out, but whether you include it or not doesn't make much difference.
Posted by David Weakliem at 8:25 PM No comments:

Arthur Brooks reports that people who are more interested in politics are less happy:  "I analyzed the 2014 data from the General Social Survey collected by the National Opinion Research Center at the University of Chicago to see how attention to politics is associated with life satisfaction. The results were significant. Even after controlling for income, education, age, gender, race, marital status and political views, being 'very interested in politics' drove up the likelihood of reporting being 'not too happy' about life by about eight percentage points." I would have expected the opposite relationship, mostly because of the "locus of control" issues he discusses later in the article--basically, people who feel like they have control will be more interested in the world in general, including politics, and be happier.

Since the article didn't show the details of his analysis, I looked at the relationship.  The GSS has a question "How interested would you say you personally are in politics?" with the options "very," "fairly," "not very," and "not at all."  The cross-tabulation:

Combining all people who didn't say "very interested," about 13% reported being not too happy.  So it looks like Brooks was more or less right.  But in 1990 and 1996, the GSS asked the same question on interest in politics, except that it included a "somewhat interested" category.  The cross-tabulation (combining the two years).

So it looks like I was right:  the more interested you were, the happier you were.  But why was the relationship different in the 1990s and 2014?  My guess is that if someone is very interested in politics, their happiness is affected by the state of political life, and in 2014 most people regarded the state of political life as bad.
Posted by David Weakliem at 3:11 PM No comments:

A tale of two parties

A couple of weeks ago, I had a post about perceptions of economic conditions.  Contrary to what is often said, they are not all that negative now.  I noted that even in October 2008, they were not nearly as unfavorable as they'd been at several times in the past.  They did briefly fall to very low levels--for example, in a poll taken September 27-30 only 2% said the economy was getting better and 76% said it was getting worse, but they bounced back quickly.  By October 17-19, it was 5% better and 54% worse:  that is much more favorable than during the mild recession of 1990, and about the same as October-November 1987, which was not a recession at all.  In that post, I promised an explanation for this (relative) optimism, so here it is.

Perceptions are related to party identification--if you're a supporter of the President's party, your assessment is more favorable.  Moreover, the relationship seems to be considerably stronger than it was in the past.  For example, compare July 1996 and August 2012.  In 1996, 12% of Republicans and 22% of Democrats thought conditions were getting better; in 2013, 6% of Republicans and 44% of Democrats thought things were getting better.  The overall scores (favorable minus unfavorable) were similar, -11 in 1996 and -5 in 2013.  But that hides offsetting shifts in opposite directions:  supporters of the President's party (Democrats) were a lot more favorable in 2013 and supporters of the opposition (Republicans) were a lot more negative.  I think that explains why assessments of the economy were not that negative during the "great recession"--partisan loyalty kept the rating from falling too low.  In principle, it seems likely that this would be symmetrical--that ratings will never get all that favorable, because supporters of the other party would be slow to acknowledge that the economy was doing well.  However, in order to test that, we'd need to have a real economic boom, which hasn't happened in this century and is unlikely to happen in the near future.

[Data from the Roper Center for Public Opinion Research]
Posted by David Weakliem at 3:12 PM No comments:

In November, I had a post about change in opinions on whether immigration should be reduced, stay the same, or increased.  A few weeks ago, I had another post observing that views about the right level of legal immigration could be distinguished from views about what should be done with immigrants who are here in violation of the law.  This post will look at whether opinions on the second point have changed.  Unfortunately, there is no question that has been asked regularly over a long period of time, but there are three relevant ones that have been asked a number of times in this century.  One is "Which comes closest to your view about illegal immigrants who are currently working in the U.S.? 1. They should be allowed to stay in their jobs and to eventually apply for U.S. citizenship, or 2. They should be allowed to stay in their jobs only as guest workers, but not to apply for U.S. citizenship, or 3. They should be required to leave their jobs and leave the U.S."  Here is the average counting the first option as +1, the second as zero, and the third as -1. 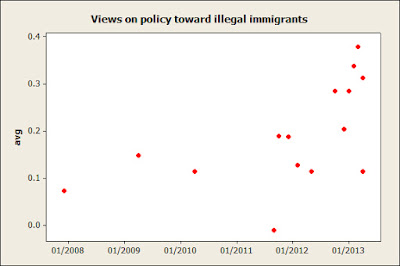 That looks like a positive trend--the correlation between the average and time is .57, with a p-value of .03.

A second question was asked twice in 2006, once in November 2015, and once in June 2016:  "do you favor or oppose...deporting all illegal immigrants back to their home countries?"  The percent in favor was 50, 47, 52, and 32.  It's hard to interpret that, since the figures for the last two surveys are so different, even though they are just six months apart.  Still, it suggests a move away from support for deportation. 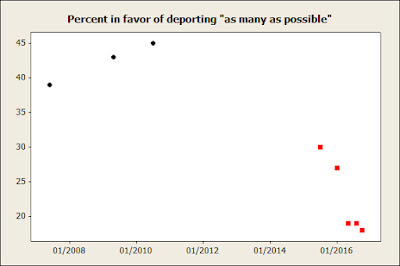 That looks like a definite decline in support for deportation.  However, in 2007-2010 the question started with "If it were possible to locate most illegal immigrants currently in the United States, would you"; in 2015-6 it started with "What do you think should happen to the illegal immigrants who are currently working in the United States."  That change might account for some or all of the difference between the early and later years--people may be more favorable about immigrants who are "currently working" than immigrants in general.  But there does seem to be a sharp drop in support for deportation between 2015 and 2016, as with the second question.

None of these questions gives definitive evidence, but taken together they suggest that opinions on policy towards illegal immigrants have moved in a liberal direction in recent years, which raises an obvious question:  how do you square that with the success of Donald Trump?  I will take up that question in a later post.

[Data from the Rope Center for Public Opinion Research]
Posted by David Weakliem at 6:41 PM No comments: