In honor of the government shutdown

Everyone agrees that there is a lot less trust and willingness to compromise in Washington than there used to be.  What's less clear is whether there has been any parallel movement in the general public.  It's surprisingly hard to find any direct information, but I did uncover one interesting question.  In 1981 and 1990, the World Values Survey asked "Here is a list of things which some people think make for a  successful marriage. Please tell me, for each one, whether you  think it is very important, rather important or not very
important for a successful marriage."  One of the things was "agreement on politics."  The question was also included in a Pew survey in 2007.   The averages in the three years (higher numbers mean less important):

Around 1989, the Times-Mirror corporation sponsored a survey called "The Pulse of Europe."  The United States wasn't included, but many of the questions were asked in various Los Angelest Times surveys taken at about the same time (some of the questions have also been asked in later Pew surveys).

One of the questions was "In general, how would you most prefer to be paid--on a fixed salary basis, so that you always know how much you will earn--or mostly on an incentive basis which will allow you to earn more if you accomplish a lot, but may result in less earnings if you don't accomplish enough."

There's a clear contrast between European and American preferences.  (The question was also asked in Italy, but I'm not sure if the data can be trusted.  Only 170 answers were recorded, which is a lot fewer than the documentation suggests there should be.  For what it's worth, they gave almost exactly a 50/50 split).
Posted by David Weakliem at 6:50 PM 2 comments:

In 1946, a Roper/Fortune survey asked "Here are three different kinds of job:
A job which pays quite a low income, but which you were sure of keeping.
A job which pays a good income but which you have a 50-50 chance of losing.
A job which pays an extremely high income if you make the grade but in which you lose almost everything if you don't make it.
If you had your choice, which would you pick?
In 1957, a Roper Commercial survey asked the same question.  (In both cases, married women were asked which job they would rather have their husband pick).  The results:

That's a pretty substantial change for a ten-year period.  Unfortunately, the question has never been asked again.  Women were considerably more conservative, whether married and answering about their husbands or since and answering about themselves:  in 1957, men were almost evenly divided among the three options, while almost 50% of women chose the safe job and only about 20% chose the high income/high risk job.
Posted by David Weakliem at 5:27 PM No comments:

Conservatives have tried to label Obama the "food stamp president," but my impression was that they haven't gotten a lot of traction with the issue.  I looked for more systematic information on views of food stamps.  There have been some (although fewer than I would have expected) straightforward questions of the basic form "should spending on food stamps be increased, decreased, or kept about the same?"  Here is a figure showing the difference between "increased" and "decreased".  For example, in January 1981 11% said increased and 47% said decreased, for a balance of -36. 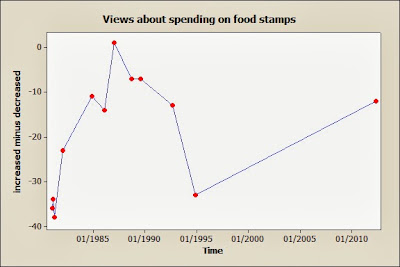 There was a lot of sentiment for reducing spending on food stamps in the early 1980s, but then things evened out.  Since 1984, the usual numbers have been about 20% in favor of increasing, 30% in favor of decreasing, and 45% in favor of keeping it the same (the rest "don't know").  November 1994 was the only exception.  My impression seems to have been about right--calls to cut food stamps aren't as popular as they were in the days of Ronald Reagan, or even Newt Gingrich.
Posted by David Weakliem at 5:22 PM No comments:

People in most of Western Europe work shorter hours than people in the United States.  One plausible explanation is differences in tastes:  basically, Europeans like free time and Americans like having lots of stuff.  However, the Nobel-winning economist Edward Prescott has argued that the difference is explained by taxes and spending.  When taxes are high and the government provides a lot of benefits at little or no cost, as in most European countries, there's not much gain from each additional hour worked.  Where taxes are low and you don't get much for free, as in the US and Japan, an extra hour of work gets you more.  So people in the US and Japan work longer, not because they have different tastes, but because the incentives are different.  In a paper published in the American Economic Review, Prescott says  "my analysis finds that French and U. S. preferences are similar" and later that "French, Japanese, and U. S. workers all have similar preferences."

This has important policy implications:  it means that rather than being a reflection of what Europeans want, low work hours are making Europeans worse off than they could be.   According to his calculations, the French would be exactly 19% better off if they adopted American rates of taxes and spending, which would lead them to work as much as Americans, which would give them extra goods that they would enjoy just as much as Americans do.

Oddly, Prescott didn't offer any information about preferences:  he just found that a formula including tax rates helped to predicted time at work for seven countries, especially the decline in work hours in France and Germany between the 1970s and 1990s. But the predictions weren't perfect, leaving open the possibility that something else (like preferences) might also be involved.  The World Values Survey of 1981 asked people whether various possible changes in society would be good or bad.  One was "decrease in the importance of work in our lives."  Here is a graph showing the relationship between average opinions on that question (higher values mean approval) and actual changes in work hours. 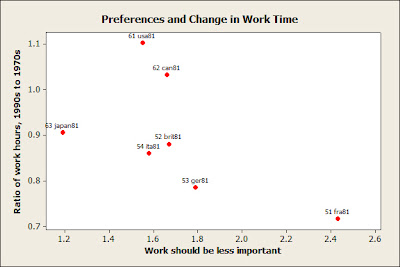 Here's a graph showing the relationship between the changes predicted from Prescott's formula and the actual changes. 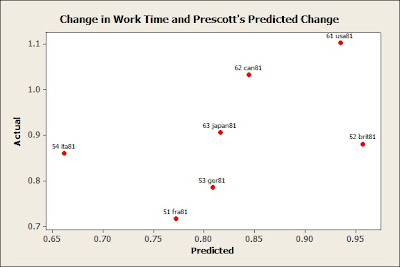 Change in work hours seems to be more strongly related to preferences than to the tax/consumption formula, and a regression analysis confirms this.  With just seven cases, neither one has a statistically significant effect, so a skeptic might say we can't be sure that either one makes a difference.  But at least we can definitely reaffirm common sense:   Americans, French, and Japanese don't have similar preference about work and leisure.

The WVS included a number of other countries, so I'll show their rankings, from most to least positive views of "a decrease in the importance of work."


Posted by David Weakliem at 6:52 PM No comments:

Last month, I wrote about a Roper survey that asked people if they thought various statements about millionaires were generally true or generally untrue.  The questions were asked twice, once in 1979 and once in 1992, and there were some changes in opinion.  In 1992, more people agreed that:

There was no significant change in opinions on:

They really live no differently from most people, except that they have more money
They are responsible for many of society's ills
They keep the common man from having his proper share of the wealth
They use their wealth mostly to protect their own positions in society
They got where they are by exploiting other people
They feel a responsibility to society because of the wealth they have

The changes weren't uniformly in a positive or negative direction, but I think there is a pattern:  people seem to see millionaires as less involved in the economy and society.  The biggest three changes are declines in belief that they contribute to charity, give employment to lots of people, and help to provide prosperity.  This seems reasonable, given the well-publicized growth of finance.  The popular image of a millionaire may have shifted from an industrialist to a "master of the universe."


Posted by David Weakliem at 11:00 PM No comments: