Was our children learning?

One of my first posts on this blog (and the most viewed, according to Google) was about how knowledge of important historical figures grew between 1952 and 1975.  I recently discovered that the same questions had been asked in a British survey in 1955.  The percentages who could identify the figures were:

Posted by David Weakliem at 9:50 PM No comments:

For some people, the Postal Service is a byword for inefficiency.  In a year-end appeal for funding, the conservative magazine Commentary said that Obamacare would create "giant new bureaucracies that will function with all the efficiency of your local post office." That struck me as odd:  I think my local post office functions pretty well, and that getting the average doctor's office to that level would be an immense improvement.   But what does everyone else think?  I looked for questions about general views of the post office--there weren't many, but I found two with very similar wording, asked in 1978 and 2010.

(1978) What kind of a job do you think the United States postal service is doing? Do you think it is doing an excellent job, a good job, only a fair job, or a poor job? Dec 1978

Age also makes a substantial difference--older people have more negative views, maybe because they are more influenced by memories of how things used to be.

Posted by David Weakliem at 5:35 PM No comments:

The very rich are correlated with you and me

The Federal Election Commission keeps records of donations of $250 or more.  An organization called Splunk4Good has organized the data into a "Campaign Contribution Explorer" (thanks to Gordon Weakliem for the reference).  I wondered how closely the Democratic and Republican shares of contributions from each state would correspond to the Democratic and Republican shares of the vote.   Of course, not everyone who contributes $250 or more is rich, but the total volume of contributions basically represents the preferences of rich people in the state, not the whole population. 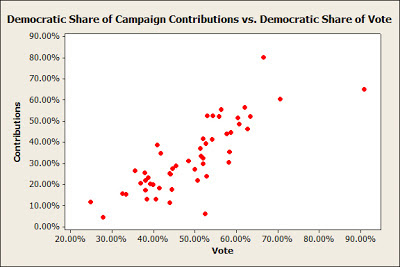 It turns out that there is a pretty close relationship (the correlation is .81).  There are two clear exceptions:  Nevada, where the Democrats won a little more than half the vote but received only about 6% of the money, and Washington, DC, where the Democrats got 90% of the vote but only about 65% of the contributions. The contribution shares covered a wide range:  there were 26 states in which one of the parties got more than 70% of the dollar contributed and only three in which one of the parties got over 70% of the votes.  However, Republicans had a clear advantage:  most of the "swing states" in contributions were those in which the Democrats got about 60% of the vote.
Posted by David Weakliem at 9:04 PM No comments:

Thomas Edsall had a column entitled "The Persistence of Racial Resentment," in which he reported on research suggesting that party support has become more polarized by racial attitudes since 2008.  The research, by Michael Tesler and David O. Sears, uses what they call a "racial resentment scale" based on responses to four questions:

This scale certainly measures something of interest, but "resentment" doesn't seem like the right term.  Resentment isn't a belief that everyone can make it if they try--it's a belief that someone else is getting an unfair advantage.   I looked for questions that seemed to measure racial resentment and found one:  "For each of the following groups, please tell me whether you feel that they are receiving too many special advantages, receiving fair treatment, or are being discriminated against" (with some very minor variations in wording).  The figure shows changes in what people say about blacks ("African Americans" in 2008). 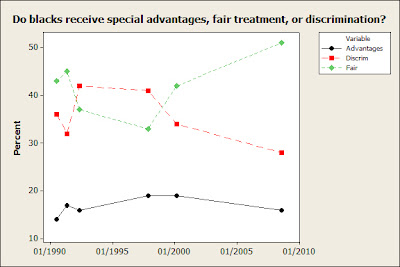 Oddly, the question hasn't been asked since 2008.  Between 1990 and 2008, there was no clear change in the percent saying that blacks received special advantages (what I would call "resentment"), but there seems to have been a shift away from saying that they are discriminated against and towards saying that they receive fair treatment.

Another expression of racial resentment is the idea that whites are the ones who really face discrimination.  The 1992 and 1997, the surveys asked about whites:  both times, about 15 percent said whites got special advantages, and about 20% said they were discriminated against.  Putting the figures together, "racial resentment" seems to be a minority view.  "Racial complacency" is more common and may be on the rise.

Posted by David Weakliem at 10:07 PM No comments:

A few weeks ago, I had a post about a series of questions on whether "young people today" had as strong a sense of right and wrong today as they used to.  There has also been a question on  "people in general":  specifically "Do you think people in general today lead as good lives--honest and moral--as they used to?"  The responses, as percent saying yes minus percent saying no: 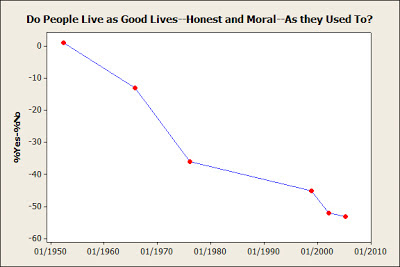 Views have become much more negative:  from evenly split (47% yes, 46% no) in 1952 to 21% yes and 74% no in 2005.  I'm not surprised that opinions became more negative between the 1950s and the 1970s, but it's interesting that they've continued to become more negative since the 1970s.  Even by most traditional standards of morality (crime, divorce, drug use), Americans have generally improved since the 1970s.
Posted by David Weakliem at 5:48 PM No comments: