Mistakes were made, part 2

Before asking how Donald Trump won the election, it's necessary to ask how he even stayed close. There were numerous occasions when it seemed that he'd gone too far, and done or said something that would finish him off.  The answer to that question can be found in some of the classics of early public opinion research:

1.  Most people don't pay much attention to politics (Campbell, Converse, Miller, and Stokes, The American Voter).
2.  When they do, they usually confirm their prior inclinations (Berelson, Lazarsfeld, and McPhee, Voting).

So a lot of people voted for Trump because he was a Republican and Hillary Clinton was a Democrat. Others voted for him because they felt like the Democrats had had a chance and now it was time for a change.  Although this point is not very exciting, it's important.  Many discussions of Trump voters treat them as exotic--out there in West Virginia or Ohio, in towns devastated by the loss of an industry like steel or coal.  But a lot of Trump voters can be found closer to the media centers, in nice, well-kept houses with Trump signs out front.  For example, Connecticut is a "blue state," and Clinton won easily--but Trump still got 41.7% of the vote and carried about half of the towns.  In fact, Trump got more votes in Connecticut than in West Virginia. 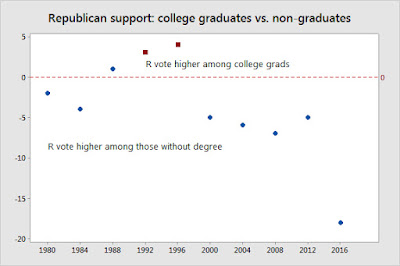 Early public opinion research also helps to explain why Trump repelled more educated people:  they give more support to civil liberties and have more awareness of and concern with the norms of democratic government.  For example, sophisticated observers were shocked when Trump told Hillary Clinton that she would be in jail if he were president (even Charles Krauthammer said that was going too far)--in a democracy, you don't put political opponents in jail.  But for someone who didn't know much about the history or theory of democracy, it wouldn't seem like a big deal--if she was guilty of a crime, shouldn't she be in jail?  And if there was even a chance she was guilty--and lots of people were saying that she was--why not appoint a special prosecutor to find out?

What about his positive appeal?  This is something I've written about several times over the last year or two (see the list at the end of this post):  Trump is an economic nationalist, opposed to immigration, free trade, saying he'd punish companies that move jobs overseas.  These are all popular positions, and especially popular among less educated people.  They also haven't had many advocates among major American politicians, so Clinton and the Democrats didn't have much practice in countering them.

This raises the question of whether other people will be inspired by his success to appeal to the same sentiments, so that the educational split will remain.  I'll discuss that in a later post.