This post extends a few points from my previous post.  In that one, I quoted Ross Douthat:  "America’s major political parties generally tend to be more responsive to public opinion, and less constrained by elite sentiment, than their counterparts in Europe" and added "it's not just that America's major political parties are more responsive to public opinion, but that they are inclined to accentuate any potential division in public opinion."  Although I agree with Douthat's claim, I would change the terminology, because there are different kinds of elites, so there isn't necessarily a single "elite sentiment."  It would be better to say that in Europe, political elites are more influenced by "expert" sentiment, and less by public opinion.

That's a secondary point.  My main one is to say what I meat by "accentuate any potential division in public opinion."  Take the immigration bill of 2013, which was in line with what the public seemed to want.  So why didn't it get support from enough Republicans to pass? If it had, most people would have approved, partly because they agreed with the content, and partly because people like it when politicians from different parties shake hands and talk about bipartisanship.  But people generally give most of the credit or blame to the president, so Obama and the Democrats would have benefited more than the Republicans.  On the other side, although the general idea of a path for citizenship for "deserving" immigrants coupled with stronger border security was popular, any legislation would have to be complicated and open to potential objections (e. g., the provisions for border security were inadequate).  So if Republicans held out against it, they could raise enough doubts to drive support down, so they wouldn't pay much of a penalty for opposing it.  The public might become frustrated with "gridlock," but the president would take more of the blame for that.  So a strategy of uniform opposition can prevent a president from accomplishing much, which prevents him or her from becoming too popular.  The Republicans perfected this approach under Obama, although it had the unanticipated effect of making the Republicans in congress unpopular (they got some of the blame for gridlock), providing an opening for Donald Trump.

In the past, it might have been possible to get enough Republican votes to get the bill through.  That is harder now, partly because fewer members of congress have a personal base of support that would give them the freedom to go against their party.  Although I don't have direct evidence of this, I was able to find a number of questions, mostly from Gallup, that asked people if they could name their representative in Congress.  The percent who said that they could: 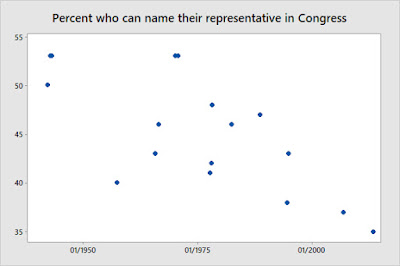 There is a clear downward trend, despite the increase in average levels of education.  Most of the surveys just asked people if they knew, but a few also asked for the name and recorded whether it was correct.  In 1957, 5% gave the wrong name, in 1977-8 about 10%, and in 1994 about 15%.  That is, the figure might understate the decline in knowledge--not only do fewer people think they know the name, but more of those people are mistaken.

So my idea is that as politics has become more nationalized, a strategy of across-the-board opposition has become more effective, and that means that the parties pull their supporters farther apart.

[Data from the Roper Center for Public Opinion Research]
Posted by David Weakliem at 10:05 AM