In 1986, a CBS News/NY Times poll asked "Overall, would you say most recent immigrants to the United States contribute to this country or do most of them cause problems?"  The question has been repeated a number of times, most recently in 2015.  The percent who said "contribute" minus the percent who said "cause problems" (usually 5-10% volunteered "some of both" or "depends"): 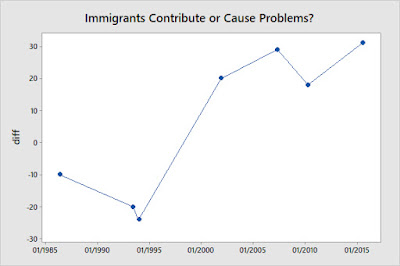 That suggests that opinions became somewhat less favorable from the mid-1980s to the mid-1990s, and have become pretty steadily more favorable since then.  The pattern resembles that for opinions on whether the number of immigrants should be increased or reduced (see this post).

It occurred to me that some opinions shift depending on the party that controls the presidency--usually against the policies associated with that party.  If you look at the figures that way:* 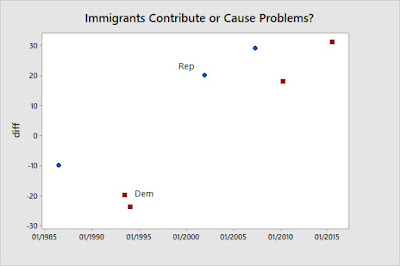 A model of a linear trend plus a party control effect provides a very good fit.  Even though the sample is tiny, the party contol estimate is statistically significant (t=7.4, P=.002).  In principle, I find it implausible that the party of the president makes a big difference for opinions on this issue, so I'm still inclined to favor the idea of a shift in opinion against immigrants until the 1990s and then a shift in favor.  Either way, it points to the paradox of Donald Trump's success coming at a time when public opinion about immigrants and immigration was more favorable than it had been before.

[Data from the Roper Center for Public Opinion Research]
Posted by David Weakliem at 11:26 AM