1 (blue):  Would you approve or disapprove of an amendment to the Constitution [in 2013 "vote for or against a law"] which would do away with the electoral college and base the election of a President on the total vote cast throughout the nation?
2 (red):   Presidents are now elected by the Electoral College, in which each state gets as many votes as it has members of Congress and can cast all of them for whoever wins in that state. Do you think we should keep the Electoral College, or should we amend the constitution and elect as President whoever gets the most votes in the whole country?
3.  (green):  Thinking for a moment about the way in which the president is elected in this country, which would you prefer--to amend the Constitution so the candidate who receives the most total votes nationwide wins the election or to keep the current system, in which the candidate who wins the most votes in the Electoral College wins the election? 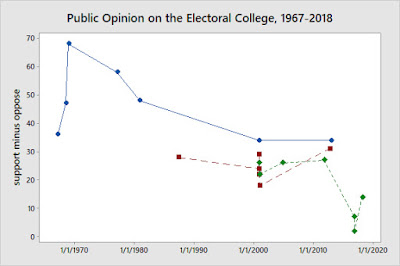 They are pretty consistent for the period of overlap, although support for abolishing the Electoral College seems a bit lower under the second and third forms (maybe because they explicitly say that it's the way we currently elect presidents).  There is always more support for abolishing it than keeping it--until 2016, a lot more.  It was almost even right after the 2016 election, but in the latest survey had returned to 55% in favor of abolishing it and 41% in favor of keeping it.  The greatest support for abolishing it (80%) was in November 1968, right after the third-party candidacy of George Wallace, which had the goal of preventing an Electoral College majority.  The election of 2000 had much less impact on opinions that 2016, maybe because of the general increase in partisanship since 2000.

A lot of recent commentary has treated abolishing the Electoral College as a radical cause, but the public generally likes the idea.  I thought that it would be fairly popular, but was surprised at just how popular it was, at least through 2013.  I suspect that most people don't have strong opinions, and will just follow their party, so that if it becomes a significant topic of debate there will be something close to a 50/50 split.  However, it seems unlikely that it will hurt the Democrats.

I haven't systematically looked at group differences, but what I've seen suggests that liberals and Democrats have always been more likely to favor abolition and more educated people are a bit less likely to favor abolition.  I think there are two offsetting factors at work with education--more educated people tend to be less attached to tradition, but the popular vote is consistent with popular ideas of fairness.  The arguments in favor of the electoral college are more sophisticated (not good, but sophisticated), so they are more likely to be known to educated people.  It would be interesting to look at regional differences--are people in small states or "swing states" more likely to favor keeping the electoral college?

PS:  I criticized a column Jamelle Bouie in a recent post, but I should give him credit for the best commentary on the electoral college that I've seen.

[Data from the Roper Center for Public Opinion Research]
Posted by David Weakliem at 5:57 PM

David Weakliem
I am a professor of sociology at the University of Connecticut, and editor of the journal Comparative Sociology. My new book, Public Opinion, will be published by Polity in September 2020. Hypothesis Testing and Model Selection in the Social Sciences was published by The Guilford Press in April 2016.